Pitcher is the quarterbacks coach for the AFC champion Cincinnati Bengals and has played a key role in developing second-year Cincinnati QB Joe Burrow, the No. 1 overall pick in the 2020 NFL draft.

“We were proud of Dan and his accomplishments long before he graduated,” said SUNY Cortland President Erik J. Bitterbaum. “We’ve been impressed by all he’s done since joining the NFL 10 years ago, and you can bet we will be cheering for his team on Super Sunday.”

Pitcher has been an assistant coach with the Bengals for six years. He was promoted to his current position from assistant quarterbacks’ coach prior to the 2020 season.

His work with Burrow has helped turn things around for Cincinnati, which has not played in a Super Bowl since 1989, shortly after Pitcher’s second birthday.

Cincinnati’s passing offense ranked No. 7 in the NFL during the 2021 regular season at 259 yards per game. Burrow led the league in completion percentage (70.4%) and yards per attempt (8.9). He was second only to Aaron Rodgers of the Green Bay Packers in quarterback rating (108.3). In Burrow’s rookie season in 2020, which was cut short by injury, he set an NFL record with 264 completions through his first 10 games — the most ever by any player through their first 10 games.

Prior to this postseason, the Bengals had not won a playoff game since 1991. 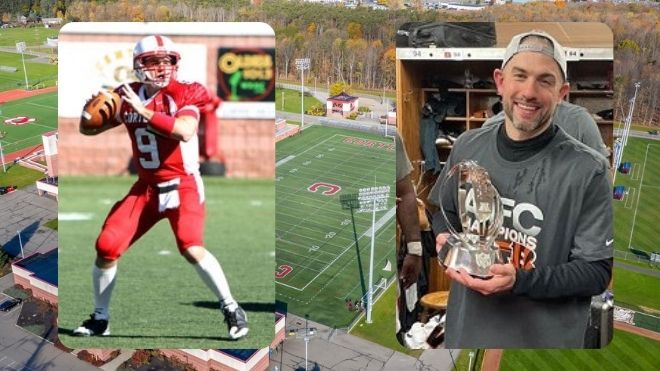 “‘Special’ is the word that comes to mind to define Daniel Pitcher. Dan was a very intelligent student, a super leader who displayed genuine humility. He was the quintessential ‘ideal’ teammate; a consummate player embodying all the attributes imbued in this great game as a player for me here at Cortland.”

Pitcher was born in Cortland, the son of Michael Pitcher, a SUNY Cortland lecturer in the Communication Disorders and Sciences Department and coordinator of the university’s audiological services.

“From Dan’s earliest days, he was interested in football,” his father recalled.  “He was a student of the game. He would play Madden and go full manager mode in drafting teams. In his quiet times he would draw up plays on paper with X’s and O’s.

“He loved the game and would enjoy watching games not just for the outcome but for how it was played. His dream, like any football-loving kid, was to play at the highest level. I think he carried that dream with him even to college. But whether he ever played at a higher level or not, he knew he wanted to make a career out of football.”

Pitcher graduated from Cortland High School in 2005 as a Division I football recruit. He initially attended Colgate University and was a member of its team in 2005 and 2006 but didn’t see any game time. Hoping for a better shot at getting on the field, he enrolled at SUNY Cortland in the spring of 2008.

His father wasn’t his only connection to the Red Dragons. His brother, Matthew Pitcher ’12, played offensive line for SUNY Cortland when Dan Pitcher led the team as quarterback. Matt Pitcher is now SUNY Cortland’s scholarship coordinator in the Financial Aid Office.

Dan Pitcher is also married to an alum, Marissa Goodstein Pitcher ’12. Marissa was an inclusive special education major at Cortland and was a standout gymnast for the Red Dragons. She was Division III national runner-up on vault in 2012 and still holds a share of the school record in the event (9.825).

A four-year member of the Red Dragon squad, Dan Pitcher was the backup quarterback on Cortland’s 2008 team that advanced to the NCAA Division III quarterfinals. He started in 2009 but suffered a season-ending Achilles tendon injury in the second game of the season.

Pitcher persevered. He came back as a graduate student in 2010 and earned first team All-New Jersey Athletic Conference (NJAC) honors while leading the Red Dragons to a league title and the NCAA second round.

Thanks to a medical hardship waiver, Pitcher was able to compete again for the Red Dragons in the fall of 2011 and enjoyed one of the best seasons in school history. He completed 197-of-317 passes (62%) for 2,712 yards and 31 touchdowns with just five interceptions in 11 games.

“Dan didn’t start as a college quarterback until five years after high school graduation,” MacNeill, his former coach, said. “In fact, Dan’s difficult personal road, and his eventual triumphs, speak best to defining his positive character and personal resolve. To understand Dan and his strength, you need to know his adversity.”

Pitcher finished his Cortland playing career with 402 completions for 5,033 yards and 54 touchdowns. He still shares school records for single-season TD passes (31 in 2011), single-game TD passes (five at Brockport in 2011), and consecutive games throwing at least one TD pass (13 between 2010-11). His 54 career TD passes were a school record when he graduated and still rank third in school history.

Pitcher was one of 10 finalists for the 2011 Gagliardi Trophy, the Division III national player of the year award, was a D3football.com honorable mention All-American and was named the NJAC Offensive Player of the Year.

Pitcher, who earned a bachelor’s degree in psychology with a 4.08 GPA and a master’s degree in sport management with a 4.03 GPA, also was honored as a College Sports Information Directors of America (CoSIDA) First Team Academic All-American.

Pitcher started his coaching career as an assistant at SUNY Cortland in 2012. He then jumped to the NFL, a move he credits another Red Dragon alum with helping him make. Paul Alexander ’82 was offensive line coach for the Cincinnati Bengals for more than two decades. Alexander, a native of Spencerport, near Rochester, has a house on Skaneateles Lake, and Pitcher got to know him while helping him do work around the property.

Pitcher spent four seasons in player personnel with the Indianapolis Colts, serving as a scouting assistant from 2012 to 2013 and pro scout from 2014 to 2015. He joined the Bengals’ staff in 2016 and worked with the team’s wide receivers for two years before becoming assistant quarterback’s coach in 2019.

And now, he’s about to perform under the brightest spotlight in American sports.

“The role of the quarterbacks’ coach is to assist in game planning and prepare his quarterback,” Michael Pitcher explained. “Dan is an excellent communicator, has a tremendous work ethic and he is nothing if not prepared. He has done his due diligence in assessing and breaking down every subtle nuance of defenses that Burrow is going to face and works with him and the other coaches in drafting a plan that all are comfortable with in attacking those defenses.

“I think Joe and Dan work very well together, and their mutual love of the game, their work ethic, and their preparation have led to the success that they have experienced.”