Sinkiewicz: If Bowman “had a Native American name, we wouldn’t even be talking about it,” recorded conversation with Seneca County DA surfaces [audio exclusive]

A few days after the arraignment of Fayette’s Charles Bowman at the Seneca Falls Town Court on Wednesday, July 13, criminal defense attorney John Alder Stevens says Seneca County District Attorney Mark Sinkiewicz has “turned the victim into the defendant.” And there’s evidence to substantiate that claim with a bombshell audio recording surfacing between Sinkiewicz and his client from last September.

Several weeks after a long-awaited grand jury finally ended, Bowman was indicted with two criminal misdemeanor charges by Sinkiewicz, but those charges are now being questioned by his legal counsel upon recently receiving a copy of that conversation that occurred inside the district attorney’s office on Monday, September 21, 2020.

Tucking his cellphone inside the breast pocket of his shirt, Bowman recorded the conversation with the county’s most powerful legal authority in accordance with New York’s one-party consent law.

It lasted for a little less than an hour and FingerLakes1.com has exclusively obtained a raw, unedited copy of that entire conversation following a months-long investigation.

Bowman had been joined by his initial legal counsel, Scott Porter, a local Seneca Falls appellate and criminal defense attorney, who offered him pro-bono legal assistance at that time.

It wasn’t until almost six months after a Cayuga Nation press conference turned violent in Seneca Falls before Bowman and Sinkiewicz came face-to-face for the first-time since the bloodied conflict happened. With an ill-equipped criminal justice system getting clogged statewide because of COVID-19, courtrooms across the county were brought to a grinding halt on civil and criminal matters alike.

“I’ve never anticipated for anything like this to happen,” Sinkiewicz said.

The district attorney mentioned to Bowman and Porter how the grand jury “will not decide the issue of who or who does not have legal authority” regarding the Nation’s questionable land claim. This whole ordeal is essentially “more an issue of law” rather than jurisdiction.

Yet the unanswered legal question surrounding the authority of the Nation’s controversial tribal police force is still “a vagueness” and “one of the things that we’re gonna have to grapple with.”

“I don’t pretend to understand the legal issue, but it’s easy for me to imagine that the BIA [Bureau of Indian Affairs] would say we did have legal authority under whatever authority they think,” Sinkiewicz admitted.

Later, he actually contradicts himself, claiming “they’re going to have to go in front of that grand jury and explain how it is that they can hire these guys and do it legally.” Levying his well-documented grievances against the Cayuga Nation Police Department became an uphill legal battle for Bowman and even his allies — the traditional Cayuga people, who were subject to beatings by their own police.

Simply put, Sinkiewicz doesn’t understand the Indigenous peoples like the Cayuga Nation, who reside within his own county — much like other desensitized county officials.

“I’m not wasting Seneca County taxpayers because they do pay taxes unlike the Indians,” Sinkiewicz said. “I’m not here to litigate those issues. I’m here to find out if one of my Seneca County citizens was intentionally injured in a criminal matter, and who did it and hold them responsible.” 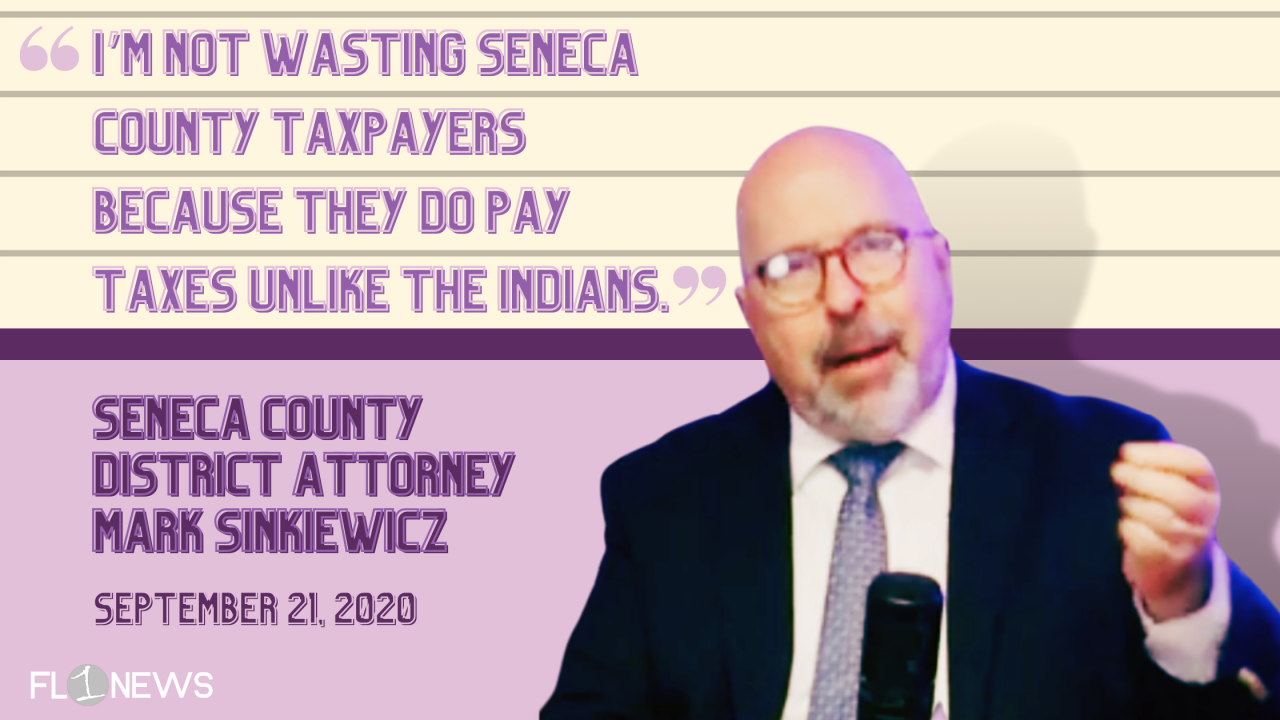 He’s still confident enough to tackle this perplexing legal issue through Bowman’s case — even calling him the “linchpin” from his perspective. As a lifelong non-Native resident of Seneca County, Sinkiewicz suggested that Bowman would be able to eventually seek possible litigation against Nation officers following the brawl at a later date — because of his non-Native status.

But that wouldn’t be the case for an Indigenous county resident, however.

Months after their revealing conversation occurred, Bowman reflected on Sinkiewicz’s remarks, insisting he “seemed dismissive and reluctant to help if I was Native.”

“For lack of better terms, it’s racist at best and a shame that our DA would take that stance,” Bowman wrote to FingerLakes1.com.

Sinkiewicz isn’t alone either. Seneca County Board of Supervisors have uttered publicly brash political opinions and agendas that are offensive and oftentimes borderline racist by specifically targeting the Cayuga Nation and its people.

Unwittingly spewing insults toward the Nation is a commonplace tradition in Seneca County, especially in their public forums.

Last August, some county officials have even thought about releasing rats at the Nation’s self-made demolition site along State Route 89 in Seneca Falls — later complaining about the same properties at their June meeting as well. 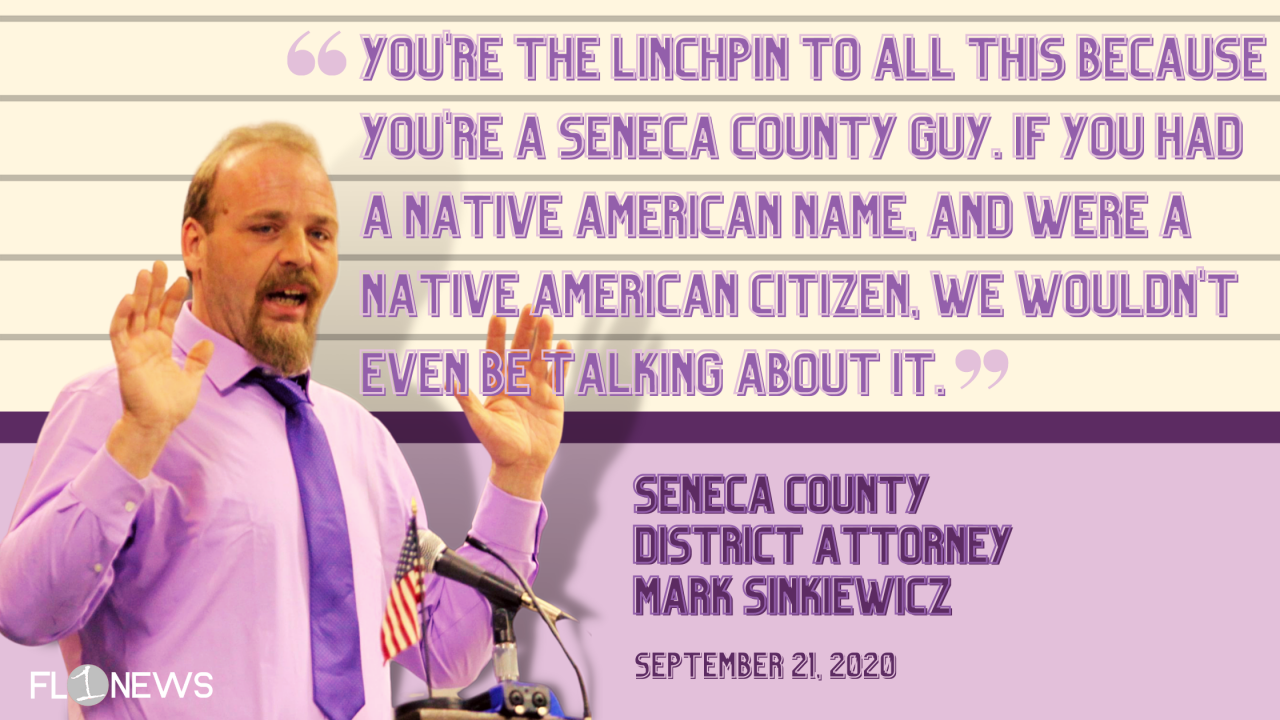 With Bowman being indicted by Sinkiewicz for alleged crimes that hurt his own reputation, “trust was an issue from the start” for him while speaking with the county’s district attorney, and his own criminal defense attorney agrees, too.

Sinkiewicz also indicated that the Nation’s revoked land-into-trust application “won’t be relevant at all because we have to take the snapshot at the time.” But Bowman swiftly responded, insisting the beating he received at the hands of Nation police led to Clint Halftown, the Nation’s Bureau of Indian Affairs representative, getting his long-standing land-into-trust application being “pulled,” citing the same federal agency in the process.

Former Secretary of Indian Affairs Tara Sweeney denied the Nation’s land-into-trust application on August 2, 2020, advising that approving their application can continue “further complicating and exacerbating an already inflammatory situation,” which even resulted in physical violence — causing a “non-Indian” to be transported to the Geneva General Hospital “after suffering a possible concussion.”

That unidentified non-Indigenous person was in fact Charles Bowman. And she even argued that the Cayuga Nation’s “apparent unwillingness to use restraint” encouraged her decision to no longer consider their application.

Fifty-days after Sweeney’s decision, Bowman, who received a broken nose at the hands of Nation police, believed that assault charges would be brought against their officers, only after Sinkiewicz said during their September meeting that a fracture can be considered as a criminal offense.

“My focus was going to be the broken nose because that, according to the research that I’ve been able to do, will meet the definition, the legal definition for assault,” Sinkiewicz said.

The county’s district attorney suggests “not all of the statements jive,” mentioning how he advises grand jurors about which laws should be applicable with respect to all of the testimony gathered from witnesses and videos.

However, none of those charges ever materialized after the recent grand jury.

Despite those facts, however, Bowman still seemed skeptical about the entire process, who’s now convinced “there is corruption in my county” and “it starts with our local officials” like Sinkiewicz.

“As I spoke with the DA, it came to mind that I was being underestimated and I was not going to be taken seriously,” Bowman said. “When you listen to the audio, this is quite apparent. He was going to protect his own.”

Gabriel Galanda, the managing lawyer at Galanda Broadman, says “there’s something awfully rotten in Seneca County” and “the whole thing stinks” when it comes to Sinkiewicz handling Bowman’s case.

“It strikes me that the local government must have some backroom deal with the Halftown faction that would cause them to stand by and watch buildings be bulldozed by purported tribal officers, and even worse, prosecute a protester rather than those officers, for whatever civil disobedience occurred during the protests that followed the property destruction,” Galanda told FingerLakes1.com.

In an incident report filed by a New York State Park Police officer, it revealed that representatives from the district attorney’s office were present while witnessing the “property take-back” alongside additional state and local law enforcement personnel who served as a “security detail.”

“In that respect, he [Sinkiewicz] and the local police are just as pretend as the Cayuga police and council,” Galanda said. “They are officials in name only.”

When several law enforcement agencies including the Seneca County Sheriff’s Department and New York State Police simply watched the demolition of Nation-owned properties on non-trust lands in late-February 2020, they also stood on the sidelines while Bowman’s civil liberties were violated just one week later.

“They had an opportunity to maintain the peace, and they abdicated responsibility,” Galanda said.

For Sinkiewicz, he says the purpose of his meeting with Bowman sought to “explain the grand jury process,” which are deemed confidential between any attorney and defendant.

“Given that this matter is still pending, it is unethical for me to comment further,” Sinkiewicz told FingerLakes1.com.

With the released audio surfacing just less than a year ahead of the 2022 election, the current district attorney is due for reelection after winning his first bid for the county seat in 2018. Upon listening to the recording, FingerLakes1.com reached out to the Seneca County Democratic Committee that gave Sinkiewicz an endorsement last cycle, but failed to answer any requests for comment.

With Seneca County acting in a complicit fashion against Bowman, Galanda insists on having the federal level interceding for his own sake before a looming trial inevitably begins.