Looking at the moments before, during, and after the violent clash

A press conference scheduled on Saturday morning started with the Haudenosaunee Thanksgiving Address and ended in violence and bloodshed.

Members of the media and supporters parked their vehicles inside the Cayuga Lake State Park, forced to walk along the snowy roadside of State Route 89 through the intersection of Garden Street Extension since the New York State Police Department barricaded both sides of the road on the black asphalt ahead of the press conference. 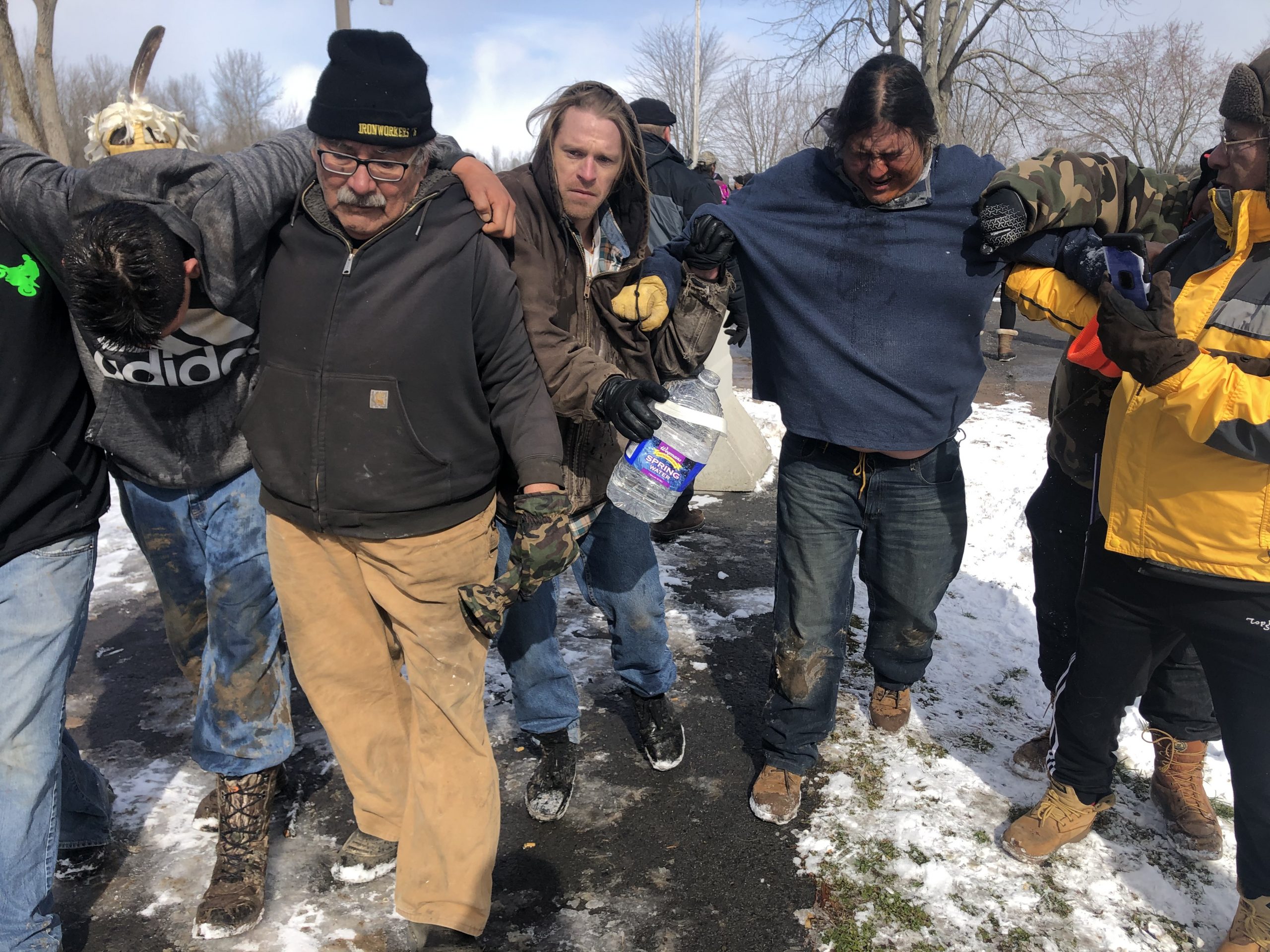 The seven condoled chiefs of the Cayuga Nation stood behind the ruined remains of their crushed community where 12 buildings were demolished last weekend during an unannounced raid, and later bulldozed.

Standing behind them, Cayuga Nation Police officers were present and in full-force with several parked vehicles at the former Cayuga Lake Trading Store — monitoring the situation from a distance.

While a press conference hosted by the traditional Gayogo̱hónǫʼ leadership was planned for a chilling Saturday morning, the succeeding brawl was never listed on their schedule.

Cameron Simpson, a member of the Onondaga Nation, watched from the ground — taping the violent encounter that went viral on social media throughout Indian Country between them and the Cayuga Nation Police Department.

“We all stepped down because it was not, not condoned at all by the Cayuga Nation.”

In a FingerLakes1.com exclusive, Simpson explained that “a handful of people,” specifically Cayuga Nation men walked onto the property, which was when the situation turned violent after being confronted by the Cayuga Nation Police with pepper spray and nightsticks in-hand.

That handful of Cayuga men who walked behind the yellow police tape were described by Simpson as “still hurt” but proud Cayugas, who sought to “go stand there and show their strength.”

“Some people started it because they felt that’s what a walk-on was what they needed and once they started getting violent that’s when everyone came in to help,” he remembered.

“When it turned violent, that’s when that’s when everyone came on,” Simpson told FingerLakes1.com.

Simpson shared that the “walk-on” was not organized or endorsed by the Cayuga Nation or its traditional leadership — also known as the Gayogo̱hónǫʼ — consisting of the seven condoled chiefs.

He recalled seeing some of the condoled chiefs and women entered the heart of the fight, all the while shouting: “It’s over. It’s over.”

“Once the chiefs stepped in and said, ‘You need to stop this,’” Simpson said. “We all stepped down because it was not, not condoned at all by the Cayuga Nation.”

“It just pretty much turned into an instant battlefield.”

When those handful of men entered the property, the Cayuga Nation Police met them directly with sheer hostility — with Simpson claiming that “they’re ready for it to get violent and wanted the violence.”

As their numbers continued growing, a crowd followed the Cayuga men into the actual compound after being beaten, which was when “all hell broke loose,” as Simpson described.

“Obviously right out of the get-go, you know, when they’re just walking in when it was just kind of like a nonviolent movement and the batons and nightsticks came-out almost immediately, that was pretty intense knowing that they were going to pull-out weapons right away,” he said.

From a “nonviolent movement,” Simpson characterized the conflict as an “instant battlefield” where some of the men showed their stoic traits as “warriors” — in his mind.

“It just pretty much turned into an instant battlefield,” Simpson recalled. People were on the ground. There’s people bleeding left and right.”

While at the same time, survival instincts kicked-in, specifically for some women that were being pushed by male Cayuga Nation Police officers, as shown in Simpson’s Facebook Live video.

“It was just absolute survival mode for some of the people,” Simpson revealed.

Even a simple task like standing-up on his own two feet became a challenge for Simpson and others when pepper spray was deployed, causing a loss of senses and earnest struggle just to stay standing upward.

“But they were standing behind Clint’s men and then standing in front of us, facing us.”

Once local and state law enforcement finally arrived, they were “still kind of staying back for a while” since the did not have enough numbers.

With local responders being expected to deescalate the violent situation, Simpson saw that police were not standing with the Cayuga Nation but instead backing Clint Halftown, the Nation’s Bureau of Indian Affairs’ federally recognized leader — and his police force — while some local, state law enforcement even watched the ensuing brawl occur from the sidelines.

“What our understanding was that they’re supposed to be, you know, a neutral ground to keep everyone safe between all of them, but they were standing behind Clint’s men, and then standing in front of us, facing us,” Simpson remembered.

He felt that the local, state law enforcement personnel showed their true colors — displaying favoritism toward the Cayuga Nation Police and members from Halftown’s Unity Council faction at the expense of the traditional Gayogo̱hónǫʼ and their allies.

“Absolutely. So, like I said, every person that was, you know, getting pushed away or pushed off was from the Cayuga Nation, none from Clint’s side,” Simpson elaborated.

“He’s not Native, but he’s one of the biggest supporters that Cayugans got.”

Charles Bowman, a lifetime Seneca County resident from Fayette, was detained by the Cayuga Nation Police and accused of assaulting a Cayuga Nation officer.

Bowman, who is seen dragged away by the Cayuga Nation Police in one of Simpson’s Facebook Live videos was “completely MIA up until maybe an hour after,” who was later sent to a local hospital after suffering from a concussion when six Cayuga Nation officers allegedly jumped on top of him.

“He’s not Native but, he’s one of the biggest supporters that Cayugans got,” Simpson admitted.

Bowman, a non-Native, has allegedly worked for the Cayuga Nation in some capacity for many years, too.

And Simpson does not shy away from considering the possibility that the Cayuga Nation Police specifically targeted him during the fray as a staunch supporter of the traditional Cayuga Nation faction and their leadership.

“That might be a possibility,” Simpson claimed. “They say that he attacked them, but that’s not him at all.”

He also mentioned that Bowman was one of the first in the community on-site last Saturday to spread the word and shed light upon this unfolding situation in Seneca Falls back on Saturday, February 22.

In addition to Bowman, Halftown’s coalition issued a statement after the incident notifying that three Native members, one each from the Oneida, Onondaga and Seneca Nations respectively were all arrested on various tribal charges.

Gabriel Galanda, the managing lawyer of Galanda Broadman, an Indigenous rights law firm stationed out of Seattle, Washington, addresses the brawl in its aftermath on his recent appearance on “Inside the FLX.”

Shortly after the conflict, Galanda told FingerLakes1.com that the Cayuga Nation Police Department possesses no legal jurisdiction over detaining or arresting non-Natives.

“They have no criminal authority over non-Indians. Period. Irrespective of land status,” Galanda wrote in a statement to FingerLakes1.com.

Galanda added that the Cayuga Nation Police’s jurisdiction is also non-applicable for Cayugas whenever on fee lands, which is the type of land status, designation — the same one that Halftown owns where the brawl and demolition both transpired.

“On fee lands they lack criminal authority over everyone, including Cayugas,” he concluded.