For those who ever thought Seneca County’s contentious legal quarrels with the Cayuga Nation had finally come to an end after the U.S. Supreme Court’s denial of their writ of certiorari over $6 million in outstanding taxes — the conflict seems to be elevating to a whole new level.

Last night, Seneca County Board of Supervisors spent more than 30 minutes bickering and battling it out before entering an executive session at the end of their Tuesday, July 13 meeting — only after a first roll call failed to initially pass, resulting in a vote to reconsider and eventually a second roll call, which ultimately passed.

The major contention verbally festered between Lodi Supervisor Kyle Barnhart and Cindy Lorenzetti, Fayette’s supervisor, over whether members of the county’s Citizens Advisory Board should be allowed into executive session alongside County Manager Mitch Rowe as well as Dave Ettman and Brian Laudadio, the county’s attorneys.

Earlier on, Chairman Robert Hayssen said “somebody asked me to inform the board” about who are the current members of the Citizens Advisory Board — since they haven’t met in over a year and half.

In 2007, the county founded the Citizens Advisory Board, which was dedicated to assess and evaluate the Cayuga Nation’s ongoing land-into-trust application. Although the board has been active at the county level for nearly two decades, Hayssen rattled off a list of their members as a part of his Indian Affairs Special Committee’s update.

Richard Ricci, Russell Wheeler, Ross Parks, Ken Patchen and Bob Shipley were all named and planning to attend the supervisors’ executive session to “talk about Indian affairs,” according to Hayssen.

But when it came to the vote on entering an executive session, Barnhart candidly asked for a simple explanation behind why supervisors needed one — followed by a long pause — with one supervisor even saying offscreen: “I’m not sure.”

“There is no reason given to enter executive session and I’m still not really hearing a reason,” Barnhart said. “There possibly can be,” Lorenzetti answered back.

Last night seemed to be “a small protest by many of the newer supervisors against taking the same tired approach with the Cayuga Nation,” Barnhart suggested after the meeting to FingerLakes1.com.

“It was also an honest reminder that we don’t always need executive session to discuss difficult issues. The public deserves to know where we stand and not keep these issues shrouded behind closed doors,” Barnhart told FingerLakes1.com. “I believe in open and transparent government, even when the topic is delicate and difficult to navigate.”

He had been one of only the few supervisors who kept asking questions, insisting there’s no “sufficient reason for meeting behind closed doors,” especially since the county is not pursuing any new or pending litigation in sight — or so it seems.

“If these folks want to speak on Indian matters, they should do it publicly,” Barnhart said. “They don’t hold any legal advice for us.”

However, Lorenzetti insisted on their inclusion as a part of last night’s pending executive session, claiming each of them were “instrumental” in creating ideas and suggestions in response to the Nation’s land-into-trust application.

“They were allowed into every executive session,” Lorenzetti said. “They were part of the decision-making process.”

And she wasn’t alone. Seneca Falls Supervisor Mike Ferrara echoed similar sentiments, suggesting that members on their board possess “over 200 years of experience” and how they should trust them since they’re people of “high integrity.”

“I completely trust their word,” Ferrara said. “I would never doubt their integrity.”

Russell Wheeler, a Seneca Falls resident and inaugural member of the Citizens Advisory Board, attended last night’s meeting, pledging to maintain their promise to confidentiality.

“We were committed in the very beginning knowing full well that what we heard in the executive session was confidential,” Wheeler said. “And thus far we have not violated that…. and continue to do so if allowed to be there.” 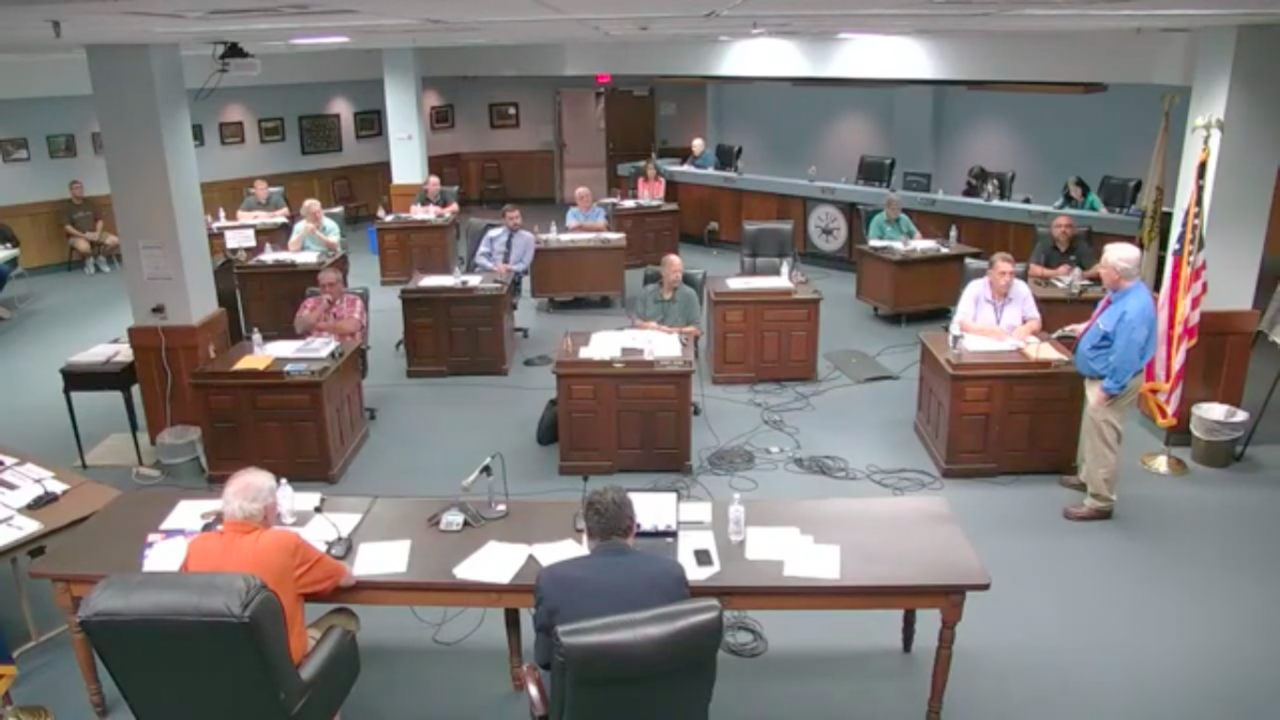 Russell Walker, a member of the Citizens Advisory Board, speaks before the Seneca County Board of Supervisors on Tuesday, July 13.

Meanwhile other supervisors were concerned about whether Citizens Advisory Board members are bound by the same confidentiality measures that are entrenched in New York’s Open Meetings Law for elected officials and county employees. And when it comes to determining whether there’s any enforceable confidentiality, “the answer is no,” Ettman says.

That’s when an initial roll call for a motion to enter executive session occurred, failing to pass after six supervisors voted against the measure.

Shortly after, Richard Ricci, a Fayette native and another inaugural member, spoke on behalf of the board 15-years after its inception, claiming that despite the county’s definitive loss from “the highest court in the land,” it’s still a “battle worth fighting.”

The longtime advocate against the expansion of the Cayuga Nation’s checker-boarding land claim process is already contemplating new avenues to pursue just a little more than a month after the Supreme Court’s denial — even possibly entertaining the assistance of grassroots organizations like Upstate Citizens for Equality, a Verona-based organization that has been fighting Indigenous land claims in New York State and considered as “a local hate group” by the Oneida Nation’s traditional leadership.

Ultimately, Ricci vowed “we’re going to hold you accountable” if the county simply gives up on their decades-long legal fight over land, claiming he’ll round up at least 200 people in no less than 15-minutes — all of whom will tell the board to “don’t quit” either.

Mike Enslow, Waterloo supervisor at-large, started raising his voice while asking Ricci and the rest of their board about what they’ve accomplished within the last 41-years since 1980.

“I know some of us newbies have not been a part of this 40+ year fight, but I would hope my fellow board members would be open to trying something different or even working towards something different to try to bring up a peaceful resolution,” Enslow told FingerLakes1.com after their meeting concluded.

And last month, a new alternative had been presented by Frank Sinicropi, the county’s treasurer, before the Board of Supervisors: consulting the Cayuga Nation itself, but that idea had been immediately shot down during June’s meeting. For some county officials, their relationship with the Nation is a hostile one, which has been likened to playing a game of poker — quite possibly at a casino.

“We wasted a lot of years of our lives here, I guess,” Hayssen said. “I guess do you want to tell the Indians they won. Are you giving up? Why would we show the Indians our cards?”

Once the supervisors come up with “a game plan” alongside the county’s legal team and Citizens Advisory Board, Ferrara suggests bringing it to the public at that time. It’s far from being just a Seneca Falls issue and rather a countywide one — forcing supervisors to finally draw a line in the sand before “it’s going to get worse,” according to Ferrara.

A vocal Lorenzetti placed pressure to reconsider their previous votes, with Enslow telling FingerLakes1.com that newer supervisors were “bullied and strong-armed to change their vote” before the second roll call passed when three out of the six supervisors who voted against the initial measure ended up changing their minds in the process.