Editor’s Note: An earlier version of this article stated that 118 Ward 6 residents were surveyed ahead of City Council’s April 20 vote. The actual number is 139 residents surveyed, 118 in favor of an appeal and 21 against. The article has been updated to correct this error.

The Geneva City Council voted 5-4 not to appeal a state judge’s decision to strike down the City of Geneva’s Police Review Board (PRB). Mayor Steve Valentino cast the tiebreaker vote.

The motion to invalidate the Geneva PRB was handed down by State Supreme Court Justice Craig Doran on April 11, 2022. Tonight’s decision means the Geneva PRB will not move forward.

Community leaders, including former members of the PRB, gathered at Jordan Hall on Wednesday for a joint press conference held before the council’s meeting.

During the press conference, Ward 5 Councilor Laura Salamendra gave a speech urging her fellow councilmembers to vote to authorize an appeal to Doran’s ruling. A photograph was also presented that depicts a computer background image of of what appears to be Salamendra with ‘GPD’ written across her forehead. This is reportedly from a computer at the Geneva Police Department’s (GPD) booking area in the Public Safety Building.

The image presented at the press conference can be viewed below: 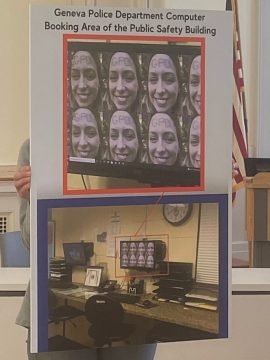 Ward 6 resident Hannah Dickinson presented the results of a survey conducted on April 16-19 that asked 139 residents of Ward 6 about their views on the Geneva PRB. Of the 139 people surveyed, only 21 chose not to sign a petition asking City Council to support an appeal and stay on the decision to overturn the PRB. 118 residents expressed support for an appeal of Judge Doran’s decision.

Watch the councilors vote on the resolution here:


Councilmembers gave impassioned speeches both for and against Wednesday’s resolution. Some also commented on the photos presented by Salamendra as well as her decision to hold a press conference.

This is a developing story. Check this page for more updates.

Hayley leads our newsroom providing reporters with assignments and covering the intersection of economic development and local history in the Finger Lakes. Have a lead or question? Send it to [email protected].