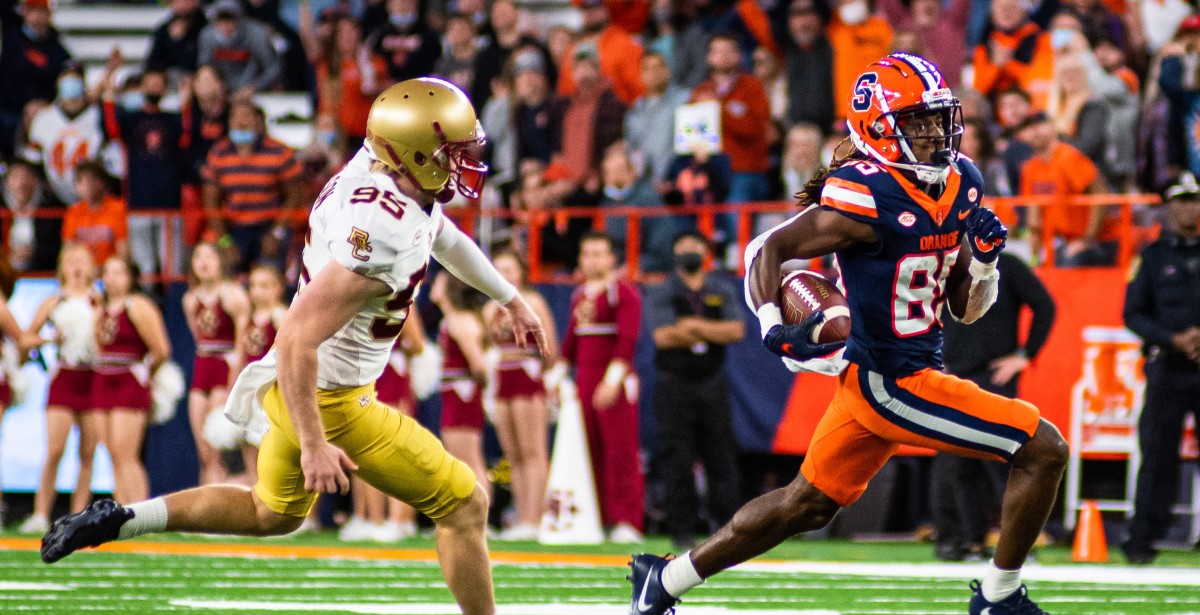 Syracuse football standout Sean Tucker has earned his third weekly Atlantic Coast Conference honor in the month of October after running for more than 200 yards against Boston College on Saturday. The nation’s leading rusher was named the ACC’s RB of the week for the third time in the last four news cycles, previously garnering the honor for his performances against Wake Forest (153 yards; Oct. 9) and Clemson (157; Oct. 16).

Against the Eagles, Tucker reeled of breakaways runs of 51, 41 and 37 en route to finishing with a career-high 207 yards on 26 carries. The total was good for ninth in program history, coming in as the most productive rushing outing since Prince-Tyson Gulley went for 213 against West Virginia in the 2012 Pinstripe Bowl.

“We knew they were going to stack the box coming in so it wasn’t going to be easy,” Tucker said, “but you’ve just got to keep plugging away and soon enough you’ll definitely pop one.”

Third-year Orange slot receiver Courtney Jackson also earned ACC honors being named the conference’s specialist of the week. He brought a third-quarter punt back 64 yards for a touchdown to give SU its third touchdown in less than five minutes.

Tucker narrowly missed going 4 for 4 with ACC awards in October, posting 118 rushing yards — his third-lowest total of the year — to go with a touchdown in the team’s Week 8 win over Virginia Tech on Oct. 23. He heads into the Orange’s bye week leading the nation in rushing yards (1,267) as well as all-purpose yards (1,505) and all-purpose yards per game (167.2). The returning freshman ranks second in rushing yards per game (140.8) while his 11 rushing touchdowns are tied for 11th nationally, though quarterback Garrett Shrader has quickly risen to the team lead with 13.

When SU returns to action at Louisville on Nov. 13, Tucker will have a chance to break the Orange’s single-season rushing record, currently held by Joe Morris. Through nine games, Tucker already ranks third in the SU record book and needs only 105 more yards to catch Morris.

That’s why, head coach Dino Babers implied after the BC game, that the 200-yard performance didn’t come as a surprise to him.

“That was practice-like, what he did today,” Babers said after the game. “He’s done that a lot in practice. … Not to take away from him, but I’ve seen him do that before.”