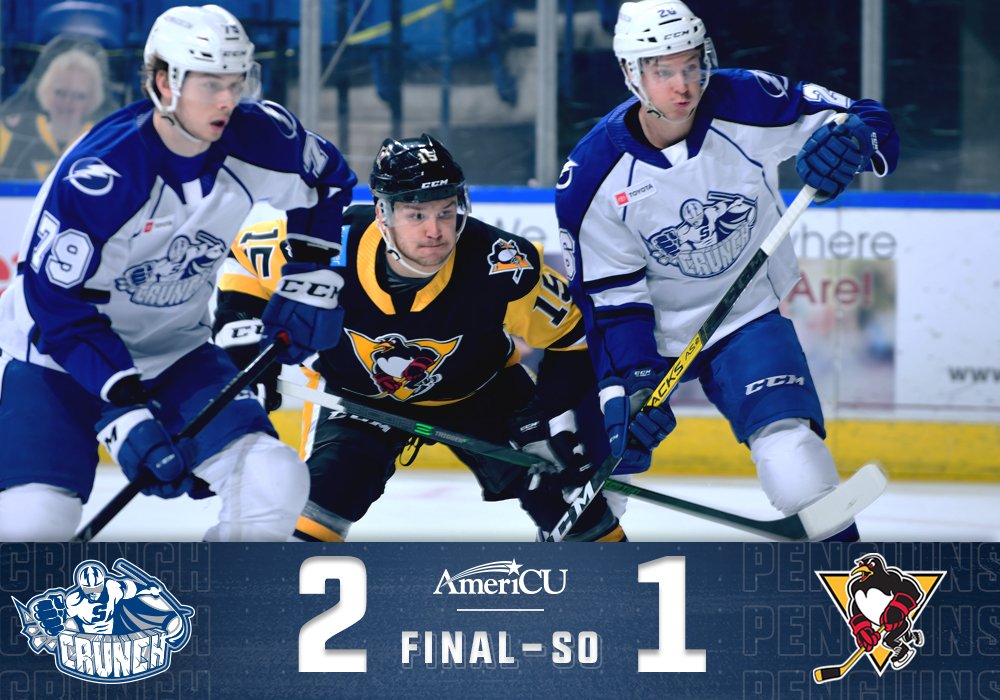 The Syracuse Crunch edged the Wilkes-Barre/Scranton Penguins, 2-1, in a shootout tonight at the Mohegan Sun Arena.

The Penguins were first on the board, but the Crunch evened it up when Cole Schwindt scored his first professional goal to eventually force overtime. Taylor Raddysh and Otto Somppi helped the Crunch go 2-for-2 in the shootout and lock up a win on the road. Syracuse is now 3-4-1-0 on the season and 1-1-0-0 in the six-game season series against Wilkes-Barre/Scranton.

Netminder Spencer Martin earned his second consecutive win turning aside 30-of-31 shots and 2-of-3 shootout attempts between the pipes for the Crunch. Max Lagace stopped 17-of-18 and went 0-for-2 in the shootout in net for the Penguins. Syracuse was 0-for-3 on the power play, but a perfect 5-for-5 on the penalty kill.

After a scoreless first period, the Pens broke the stalemate just one minute into the middle frame. Radim Zohorna
won a battle along the boards and sent a cross-zone feed that ricocheted off Felix Robert and set up Jon Lizotte for a wrister from the left circle.

The Crunch evened the score 2:05 into the third period. John Ludvig sped down the left wing on a 2-on-1 before centering the puck for Schwindt to redirect in.

With no winner decided in overtime, the game went to a shootout. Zohorna scored on the first attempt, but Raddysh quickly evened things. Martin made the stop on Cam Lee in the second round before Somppi shoveled in a backhander to put the Crunch on top. Syracuse secured the win with another save by Martin on Frederick Gaudreau in the third round.

The Crunch host the Rochester Americans on Saturday at 7 p.m.