With more than 150 friends, family and supporters in attendance, Assemblyman Brian Manketelow (R,C,I,Ref-Lyons) took the oath of office in the historic Board of Supervisors’ chambers in the Wayne County Courthouse on Jan. 1, 2019. Lyons Town Justice Larry Hartwell administered the oath of office while Manktelow’s wife, Crystal, held the family Bible. 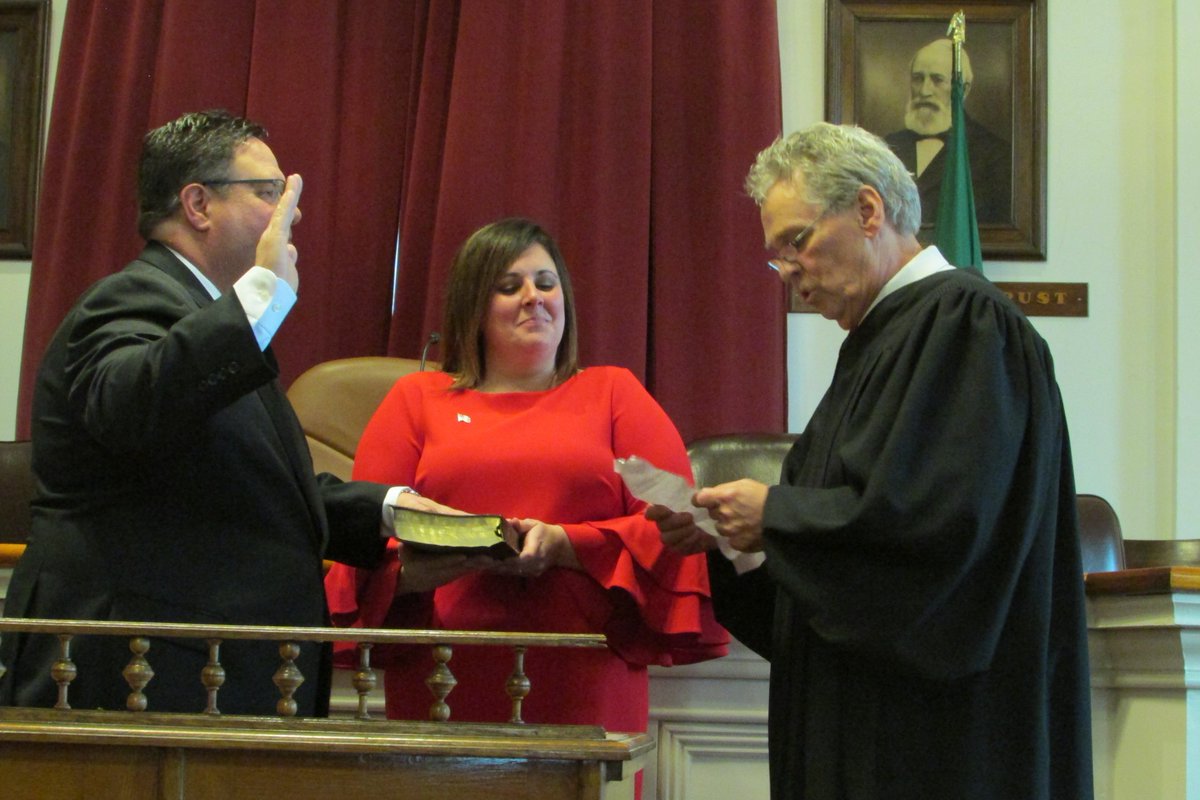 “To be your Assemblyman is an honor and privilege,” he told those who came to share the moment. “I am ready to go, to truly do everything in my power to represent you and honor you, and to do all things in a professional way for everyone in my district.”

The 130th Assembly District includes all of Wayne County, the towns of Aurelius, Brutus, Cato, Conquest, Ira, Mentz, Montezuma, Sennett, Sterling and Victory in Cayuga County and the towns of Hannibal, Minetto and Oswego in Oswego County. There were representatives from all three counties at the event on Tuesday.

Wayne County Board of Supervisors Chairman Steve LeRoy of Sodus, Majority Leader Ken Miller of Palmyra and state Sen. Pam Helming (R,C,I,Ref-Canandaigua) spoke before Manketelow was sworn in. They praised his wealth of experience and noted he possessed the qualities and abilities to become a successful Assemblyman.

Previously, Manktelow, a Williamson native and a U.S. Army veteran, served more than a decade as Lyons Town Supervisor and was LeRoy’s deputy on the Board of Supervisors.

Wayne County Sheriff Barry Virts was the master of ceremonies at the event. The Rev. Tim Young, pastor of the Heritage Baptist Church in Palmyra delivered the opening and closing prayers. Morgan Richardson of Williamson sang the national anthem and Trevor Cady, commander or the Cato American Legion lead the Pledge of Allegiance. The Walworth Fire Department Color Guard presented the colors at the beginning of the ceremony.

In addition, Wayne County Treasurer Patrick Schmitt of Walworth was sworn in during the event by Wayne County Court Judge Richard Healy.

Manktelow will begin traveling to Albany when session starts Jan. 9. He was appointed by Assembly Minority Leader Brian Kolb (R,C,I,Ref.-Canandaigua) as Ranking Minority Member of the Oversight, Analysis and Investigation Committee. He will also serve on the Banks, Labor, Small Business and Veterans’ Affairs committees.