The Newark and Marion Railway was chartered to build a railroad between its namesake cities in 1900. The line was controlled by the Beebe Syndicate of Upstate New York streetcar and interurban lines but was never electrified. It was reorganized as the Marion Railway in 1917 and was acquired by the Pennsylvania Railroad in 1930 and operated as a spur off the Elmira Branch through the Penn Central and Conrail eras. Control passed to the Ontario Midland Railroad in 1979, with operation ending in 1984. 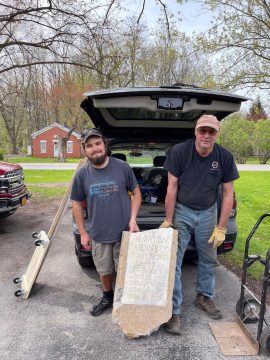 In 1979, Conrail built a new connection from the Marion Branch which allowed them to abandon the bridge over the former New York Central Railroad main line near Hydesville Road in Newark. A marble dedication plaque from 1905 was embedded in the concrete bridge abutment and was promised to the Wayne County Museum for preservation. A newspaper photographer discovered and reported the unauthorized removal of the plaque in an article published in the Newark Courier-Gazette on May 14, 1981. Whoever chiseled out the plaque broke off the top piece in the process.

Fast forward to October 2021. Rochester and Genesee Valley Railroad Museum member Adam Lloyd was attending an estate sale with items from the late George Shaw (a local lawyer and former director of the Livonia, Avon, and Lakeville Railroad who passed away in 2014). Among the many rare railroad artifacts and collectibles was the Newark and Marion plaque stored in a shed (with other cumbersome concrete markers). Adam was able to strike a deal and purchased the markers. 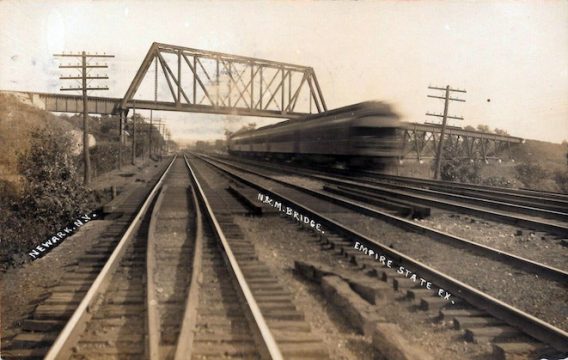 At the beginning of March 2022, local historian Ken May reached out to our museum inquiring if we knew the whereabouts of the dedication plaque, on behalf of Caryn Devlin, Marion Town Historian, who only recently discovered it was part of the estate sale in October. Chris Davis of the Newark-Arcadia Historical Society passed on this information. We were able to connect Caryn with Adam, and an arrangement was made to return the plaque home.
On May 5, Adam delivered the plaque to the Marion Historic Association and Museum, where it will be on permanent display. The Marion Historic Association and Museum would like to reunite the top piece containing the word “Newark” with the main segment of the plaque. If anyone knows the whereabouts of the missing piece, contact Caryn Devlin, Town of Marion Historian, at [email protected].