On Friday, June 10, 2022, the City of Auburn will host an unveiling ceremony for new historical markers as part of the National Votes for Women Trail program.

The National Votes for Women Trail is sponsored by the National Collaborative for Women’s History Sites. The trail seeks to recognize and celebrate the enormous diversity of people and groups active in the struggle for women’s suffrage. The two markers to be dedicated in Auburn join a program of historic markers for 250 women’s suffrage sites across the country. This program was funded by the William G. Pomeroy Foundation and the federal Women’s Suffrage Centennial Commission.

The marker denoting the location of the Women’s Educational and Industrial Union (WEIU) building funded by Eliza Wright Osborne and opened in 1907 will be installed on South Street in front of the Equal Rights Heritage Center at 25 South Street, where the WEIU once stood. Along with providing valuable resources and educational opportunities for working women, the WEIU also inspired many to join the women’s suffrage movement by creating a space where they could engage with local activists, organizations, and suffrage-related literature. Osborne was the daughter of Martha Coffin Wright, an early Auburnian advocate for women’s rights, and she carried on in her mother’s footsteps becoming a leader and advocate in the fight for women’s suffrage. 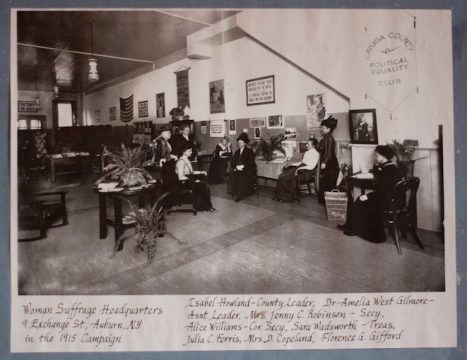 The marker denoting the location of the Cayuga County Political Equality Club (PEC) will be installed on the north end of the Exchange Street Plaza in downtown Auburn. This organization was located at 9 Exchange Street and was founded by Emily Howland who served as President and Eliza Wright Osborne who served as Vice President. Founded in 1891 with the support of the New York State Suffrage Association, the Cayuga County PEC established its headquarters in Auburn, New York. Using speeches, parades, petitions and outreach, the Cayuga County PEC campaigned for women’s suffrage throughout the county until woman gained the right to vote in New York in 1917.

The afternoon ceremony begins at 3 p.m. at the NYS Equal Rights Heritage Center and will feature invited speakers from the NYS National Votes for Women Trail Coordinating Committee, City of Auburn, the Osborne Family, the Howland Stone Store Museum, among others. This event is free and open to the public.