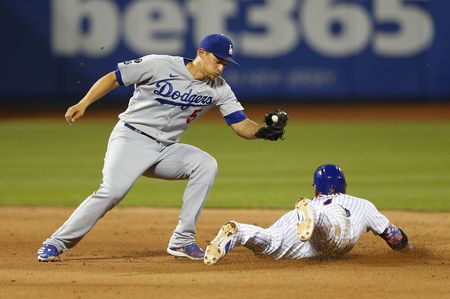 Right-hander Taijuan Walker was flirting with history on Saturday night at Citi Field. He had a no-hitter going until the seventh inning.

When it was over, Walker picked up a no-decision as the Mets lost to the Dodgers, 2-1, in 10 innings

The score was tied at 1 in the top of the 10th inning when Cody Bellinger swung at a 2-1 pitch from Mets right-hander Yennsy Díaz and doubled down the right-field line, scoring automatic runner Corey Seager.

But what Walker did earlier in the night took some of the bitterness out of the tough loss. With their best pitcher, right-hander Jacob deGrom, on the injured list, the Mets needed someone to step up and carry the load. Before Saturday, it seemed no one in the Mets’ rotation was willing or able. In fact, in 33 starts since deGrom’s last outing on July 7, Mets starters were 3-13 with a 5.11 ERA.

It now looks like Walker could be that pitcher.

Walker was dealing through the first six innings against Los Angeles. It helped that his split was magical. He retired the first seven hitters he faced before walking Billy McKinney in the third inning, then retired the next eight hitters he faced before walking his counterpart, Walker Buehler, in the sixth inning with one out. But Buehler was quickly erased when Trea Turner hit into an inning-ending double play.

Buehler himself also dealt on the mound. He pitched seven innings and allowed one run on four hits. His only blemish occurred in the fourth when Michael Conforto hit a solo home run over the right-field fence to give New York a one-run lead.

But trouble came for Walker in the seventh inning. After retiring Max Muncy, Will Smith came to the plate and ended Walker’s no-hit bid with a mammoth home run to tie the score at 1. Then Walker started to struggle, allowing a double to Seager and a two-out walk to Chris Taylor. Manager Luis Rojas took Walker out of the game in favor of left-hander Aaron Loup, who was able to retire Bellinger to end the threat.