Whilst out driving on America’s roads, the sight of a semi truck is a common one. This is because they play such an integral part in the country’s economy, carrying products from one state to another in order to meet the demands of the nation’s increasing population. Despite the fact that large commercial trucks are vital for the running of the economy, given their weight and their size, they do pose a risk to other road users. This is especially true when the driver has spent many hours behind the wheel and becomes somewhat careless or negligent or where the trucking company has not taken care of the vehicle and allowed it to become unfit for the road. 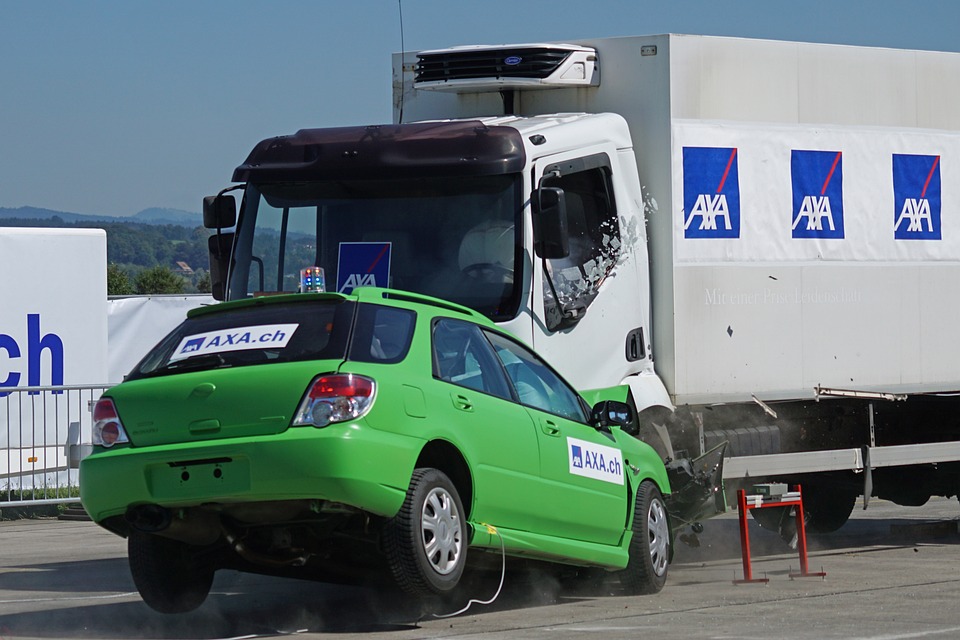 Where a semi-trailer truck collision does occur, it typically causes a huge amount of devastation, inflicting serious damage and injury to anyone that is unfortunate enough to be involved. Some of the different types of accidents involving large commercial vehicles are listed below.

Where the driver loses control of a truck, there is the possibility that it can slide and even roll right over onto the side. If a pedestrian or other vehicle is unfortunate to be underneath when the truck does this, then it can result in serious harm or even death.

A jackknife situation occurs when the trailer that the truck is pulling folds in on itself at an angle of 90 degrees. This is typically caused by the driver of vehicle braking too harshly. As a result and due to the wait of the trailer, it starts to move forwards and acts against the traction of the front cab.

If the freight that is in the back of the trailer is not correctly secured or loaded in a particular way that is unsafe, it can either cause the vehicle to be unbalanced of the load could fall out of the back, damaging any other vehicles that are behind it on the road or any pedestrians that are around at the time.

Because of the weight that some semi trailer trucks carry, the act of rear ending another vehicle on the road can have devastating effects. As well as causing significant damage to the vehicle, it is likely to also be the case that the driver too will experience injuries that have the potential to be life changing, if not fatal.

When a tire on a truck explodes, it causes the driver to lose all control of the vehicle so that it can move in any direction. This is a very dangerous scenario for not only the truck driver, but also for any other vehicles that are on the road at the time.

The action of a truck driver swinging out the left in order to make a right turn is referred to as a wide turn. This has the potential to be a very dangerous manoeuvre, especially when the driver is not fully aware of what vehicles are within close proximity of the semi trailer truck. In the very worst case scenario, pedestrians or vehicles can get trapped under the truck.

With some commercial trucks being large in size, it means that they have very big blind spots. Within the industry, these areas are referred to as no man’s land. When a truck driver is unable to see other vehicles or pedestrians that are on the road with them, then it can spell disaster, especially when making maneuvers, such as changing lanes. This can lead to vehicles being crushed or forced out from the road, and for pedestrians it can cause serious harm or even death.

In those situations where a large semi trailer truck has to apply its brakes and come to a stop very quickly, it can result in any other vehicles driving closely behind it becoming lodged underneath the back of it. This type of truck accident is one of the most deadly, as the vehicle and the passengers sitting up in the front of it, feel the full force of the truck. It is ,ade especially worse when high speeds are involved.

Another particularly devastating type of crash, when a large commercial truck hits another vehicle on the road head on, then there is usually only one winner – the truck. For the victims, an incident like this can result in major, life changing injuries or even death, depending on the speed at impact.

This typically happens when a truck driver does not obey the laws of the road and tries to jump a red light. As a result, they end up crashing into the side of another vehicle that was obeying the traffic light system and was driving across the junction.

Have you been injured in an accident with a semi trailer truck?

The negligence of a driver and / or the poor quality of a commercial truck vehicle can have a serious impact on other motorists and pedestrians using the roads if something goes wrong. Of the many incidents like this that happen across the country on a daily basis, so many of them could have been easily avoided if all of the rules were followed – rules that are there to keep everyone on America’s roads as safe as can be.

If either yourself or someone that you know has been impacted by a collision with a semi trailer truck, then rest assured that there are attorneys out there, such as the truck accident lawyers at Kendall Law Firm who can help you out to ensure that you get the financial compensation that you are entitled to for the injuries that you have sustained as a result.

This area of law is particularly complex and so it is important that if you want to pursue a claim against a truck driver, that you have a highly experienced attorney in your corner, representing you. After all, the insurance company will fight tooth and nail to ensure that you do not receive anything.