They say all good things must come to an end and for the Buffalo Bills, that time has come.

The Bills, playing in their first AFC Championship Game since the 1993-94 season, fell to the Kansas City Chiefs 38-24 in Sunday night’s game, ending their season just short of a trip to the Super Bowl.

The Bills finish their best season in recent memory that consisted of a 13-3 regular season record, their first AFC East title since 1996, two postseason wins, and multiple team records broken.

The final from Kansas City. ? pic.twitter.com/oL05Mi0fD7

And just like that, the Buffalo Bills season has come to an end. Hell of a run. pic.twitter.com/YmaCXZk9Zi

Thank you fans for a memorable year! #BILLSMAFIA . We have unfinished business so see you next season!

We've got each other's backs, #BillsMafia.

We'll grow from this. pic.twitter.com/GwgZKMMorZ

Stefon Diggs is the only Bills player left on the field. He’s watching the Chiefs ceremony. pic.twitter.com/IzTuXuQ0oT

It was a season we’ll never forget, in a year that was challenging for all of us.

You were with us every step of the way, #BillsMafia. Thank you for being the best there is.

Pretty powerful picture from the end of the game. One of the major reasons to be optimistic about the future is the emergence of this combo. Diggs was exceptional this season and Allen made a massive leap #BillsMafia

QB Josh Allen, HC Sean McDermott and others talk to the media after our loss to the Kansas City Chiefs. #BUFvsKC | #BillsMafia https://t.co/tjNsgOi1b3

It was an ugly, sobering loss. A failure on all fronts.

But, it does not remove what they accomplished. This was a special #Bills team, one that undid a lot of demons staring at the franchise. A massive step forward. And now, a new ceiling to try and bust through moving forward.

If you knew before the season the Bills would be in the AFC Championship you would've signed up for it in a second. That won't make tonight any easier, nor should it, but it was an exceptional season from a team with a young core that should be good for a long time.

The final 38-24 Chiefs. Only one team ends the season happy. A hell of a run by the boys. Thanks for all the support this season #BillsMafia

This. They’ll be back. #Bills pic.twitter.com/mVIcBsybvJ

“Don’t be sad it’s over, be happy that it happened” – wooden sign I saw in a target and how I feel about this Bills season #BillsMafia

The Bills aren’t going to reach the Super Bowl this season, but this is a fun team to watch and their time will come. Great fan base, lots of players to root for.

People are shooting off fireworks downtown. The “Let’s Go Buffalo” honks are starting. #BILLSMAFIA might be hurting, but they seem grateful for a historic season, already. @WGRZ

Significant growth from this team and from individuals from this loss. Proud of this team and grateful for all of the sacrifice that so many in this organization had to make to have this season run as smoothly and successfully is it did. Go Bills!#BILLSMAFIA

"It's going to fuel us. I have no doubt in my mind we will be back… we're young and we're only going to get better."

-Josh Allen on what he'll take away from this AFC Championship loss.#BillsMafia pic.twitter.com/7rJ8k4DEKd

Regardless of the outcome I’m proud of this team and I’m looking forward to the future. #BillsMafia till the day I die!

Buffalo thank you for a hell of a season. You guys (The Mafia) has been like no other from the start. We lost to a great team but believe me The Buffalo Bills will come back stronger then no other. Love You #BillsMafia and, Love you #Buffalo .. ShnowMan #Out ☃️✌?

As always, all glory to God.
We will be back. #BILLSMAFIA

"We didn't bring our 'A' game… we'll remember this in the offseason."

He's got a passion for the game maybe only matched by 17.. Gotta bunch of warriors on this team that'll fight to the end. Proud of these guys and what's ahead… https://t.co/EhgEkfy9vz

He's got a passion for the game maybe only matched by 17.. Gotta bunch of warriors on this team that'll fight to the end. Proud of these guys and what's ahead… https://t.co/EhgEkfy9vz

Thank you, @BuffaloBills. This season was so freaking special. Already looking forward to the next one. #BillsMafia for life.

hell of a season. what a great ride. Most fun from a Bills team in an awfully long time. Bring on the 2021 season #BillsMafia

Proud to be a Bill. Thank you Bills Mafia, you're the best ??

That one hurt. Love this team. Love this coaching staff. They’ll be back.

Josh Allen: "I didn't perform well enough for this team."

Josh Allen said he is "disappointed" in himself for letting his emotions get the best of him at the end of the game, and
"it doesn't sit well" with him how chippy the game ended

“They were the better team tonight. The Buffalo Bills will be back.”@BuffaloBills head coach Sean McDermott describes his team's AFC Championship Game loss as a learning experience. pic.twitter.com/8EOozvroty

The @BuffaloBills had an incredible season. They were a thrill to watch and I know they’ll be back in the hunt next year. What the Pegulas and the front office did to turn this organization around is impressive and to be commended.

Micah Hyde: I'm proud of what we were able to accomplish this year and I'm proud of the guys in this locker room

Sean McDermott says he thought about going for it on 4th and goal…we were having trouble coming up with points and I wanted to make sure we'd get points.

Soooo much to be proud of! You were the best of 2020 and 2021 thus far! Thank you for renewing our hope in so much more than football!
Amazing season!! We love you!
Thank you @BuffaloBills and #BILLSMAFIA

#BillMafia thank you for love all year no matter what. You are unbelievable fans❤️ so proud to be on this team with these guys.??

What. A. Year. #BillsMafia @WGRZ pic.twitter.com/Xl86dtlALo

Jerry Hughes on Josh Allen: “We try to tell him he doesn’t have to put the whole organization on his shoulders… he’s got us to where we wanted to be, so for us on defense, we gotta help him out.” @WGRZ

Police are preparing for Bills fans to make their way to the Buffalo Airport to welcome the team back. ? Police will be handing out masks for people who need one. Plane is expected to land in the early morning. @news4buffalo pic.twitter.com/mbJ87uBBNd

My @BuffaloBills had a great season and we will be back next year. I’m very proud of the team. #GoBills!

Buffalo Bills fans are starting to arrive at the airport. #billsmafia @news4buffalo pic.twitter.com/SIvOtj3WCP

Hell of a season! We'll be back?

KC offense had 7 drives if you take out kneel down before halftime and running out clock end game. Got into Bills red zone on 6 of 7 drives and got a TD on 5 of those 6 trips. Were 5-5 in goal to go.

I didn't think KC D would be that good. Bills offense had just 2 TD's on 10 drives and one of those TD's came on a drive start at the KC 3 yard line.

The Bills team busses are pulling out of Arrowhead following tonight’s loss pic.twitter.com/QbBiKi2EwF

Bass becomes the first NFL kicker since the Rams Greg Zuerlein (2018 season) to hit multiple 50+ yarders in the same postseason. 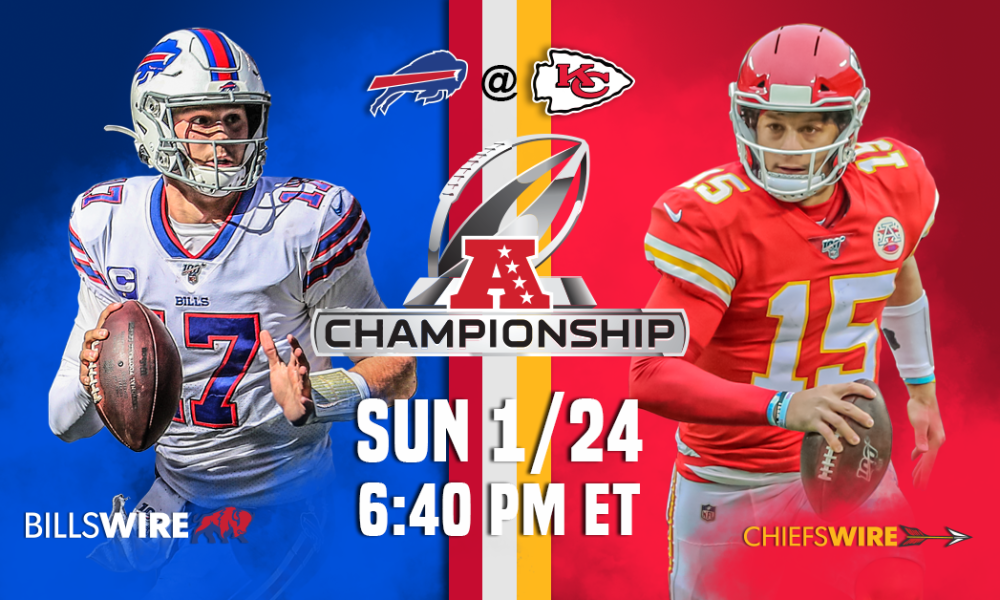 After starting the postseason with wins against the Indianapolis Colts and Baltimore Ravens, the Buffalo Bills (15-3) and Kansas City Chiefs (15-2) will face off on Sunday in the AFC Championship game at Arrowhead Stadium in Kansas City, Missouri. Kickoff is scheduled for 6:40 p.m. Eastern on CBS.

This is the second meeting between these two teams this season. The Chiefs beat the Bills 26-17, in the pouring rain on October 19 at Bills Stadium.

One of the biggest storylines for this game is the health of Chiefs QB Patrick Mahomes. He left last Sunday’s game against the Browns with a concussion. Mahomes is also dealing with a toe injury.

It's been a season unlike any other, but there's no one else we'd want by our side.

We love you, #BillsMafia.

A championship matchup that only happens every 27 years.

Super Bowl QBs explain why Josh Allen is ready for his moment in #BUFvsKC: https://t.co/mgoatHVhzc pic.twitter.com/0MCSEPP1vB