There were a total of 3,924 hospitalizations in New York State as of Wednesday’s press briefing delivered by Governor Andrew Cuomo.

It reflects another steady increase day-by-day, as COVID-19 spread intensifies.

Earlier in the week, Governor Cuomo said that hospitalizations would play a role in the economic restrictions that are enforced, or whether a region will enter a yellow, orange, or red zone.


To that end, the Finger Lakes and Western New York saw the steepest increases in hospitalization over the last three weeks, according to data released by the Governor during that press briefing. 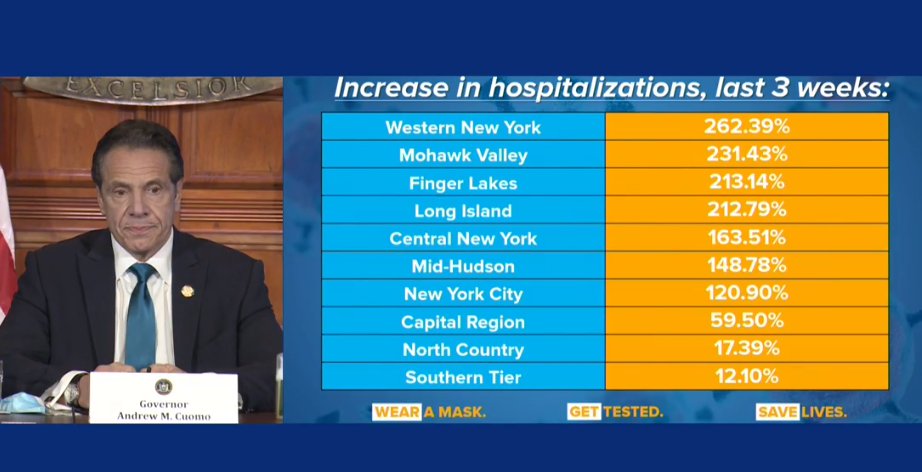 Earlier in the day, officials in Wayne County pleaded with the public to do their part. “Our regional (Finger Lakes) hospitalization rate is now the worst in the state, and many of our area hospitals are extremely close to capacity,” officials there said. “The time to act in order to prevent further restrictions and impacts on our area for the upcoming holidays is now.”

Gov. Cuomo announced no new restrictions and doubled-down on the message that gatherings at home are a major problem.


“The salons and gyms have new protocol and fewer attendees,” Cuomo said. “You’re seeing a reduction in the cases at nail salons, gyms, net reduction in restaurants, large gatherings because social behavior has changed.”

Hospital officials have been directed to come up with new plans to meet greater capacity and identify staff that could help in the event they have overflow.