Nearly 96-hours after Election Day, the status of the presidential election results is no longer in limbo.

Now, it’s time for a celebration and healing that has captured the attention of the public here at the nation’s capital and shook to its core after Joseph R. Biden Jr. had been announced as the President-elect and Kamala Harris as the Vice President-elect earlier Saturday morning initially by the Associated Press and several other national news organizations soon after. 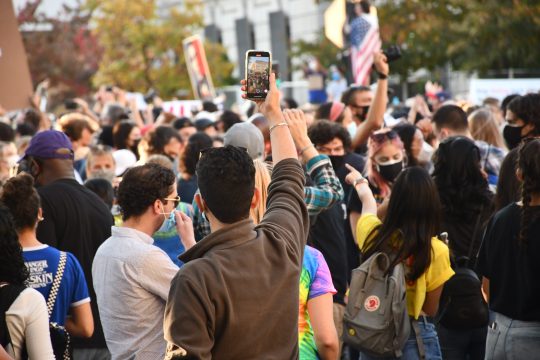 Thousands flooded into Black Lives Matter Plaza, McPherson Square and the surrounding streets nearby the White House on that same day, showing their pride and support for the projected 46th President of the United States.

In Washington, D.C., toasts were already being made to a start of a new presidency come next Inauguration Day in January 2021.

With beers and plenty bottles of champagne on-hand, some in the crowd happily popped-off corks even during the early afternoon hours over the weekend after the news broke, when the presidential race had been officially called.

Others courageously climbed-up multiple municipal traffic light poles and showered those below in alcoholic beverages from atop their perches.

These same events continued to occur throughout the afternoon and nighttime with different individuals staking claim to the space just for a moment to capture an ideal photo opportunity.

Later that evening, however, the District of Columbia’s Metropolitan Police Department unexpectedly walked through the crowds of Black Lives Matter Plaza after waiting patiently on the sidelines for most of the day.

The department had to intervene on numerous occasions by stationing officers underneath the poles to prevent anyone else from climbing them in the future and sternly reprimanding those who kept violating their own warnings.

Despite a high presence of law enforcement on-site, the party never stopped. 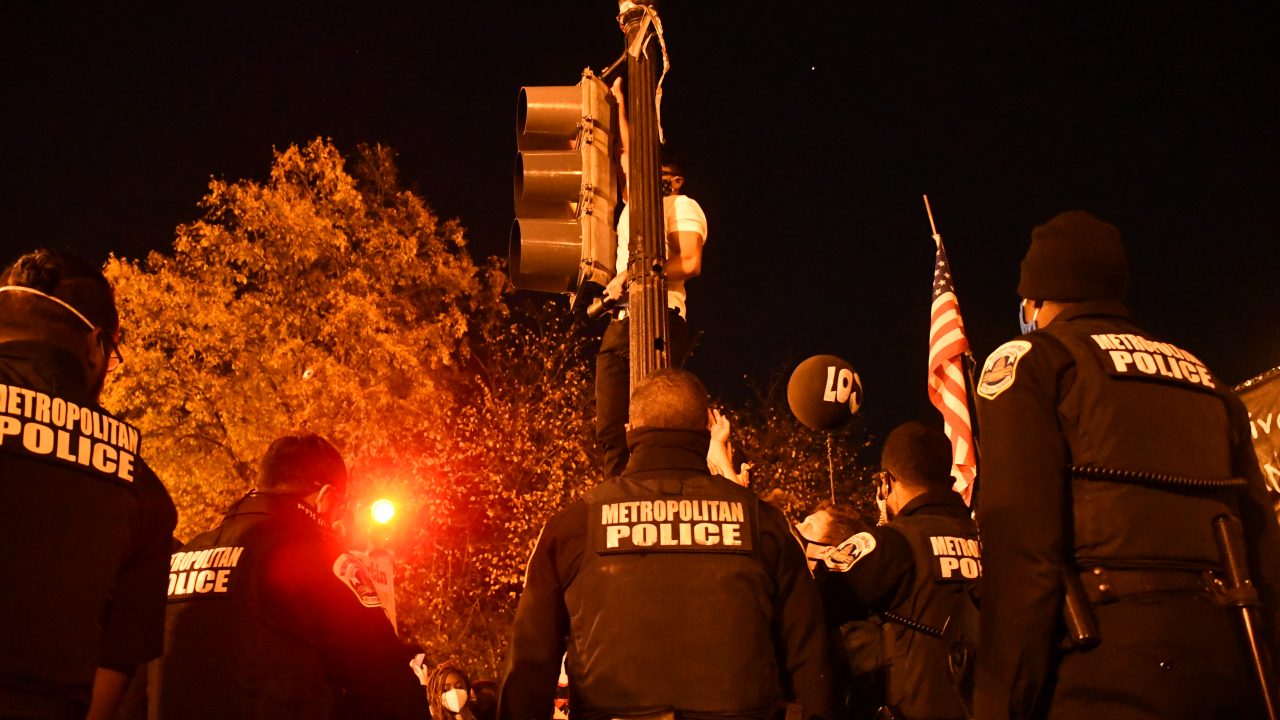 Flags and banners of Biden Harris 2020 filled the air along with the beating of drums and instruments playing.

Chants and cheers reverberated throughout the city, some calling for President Donald Trump to resign immediately by Refuse Fascism, a national non-profit founded to remove him and Vice President Mike Pence from the White House following the 2016 presidential election.

Even a fair share of signs targeted Trump and his record for the last four years while residing the Oval Office.

Yet, Trump was reportedly away from the White House while golfing at the Trump National Golf Course, his private 800-acre facility located in Sterling, Virginia, and unable to hear the noise from out in front of his home. 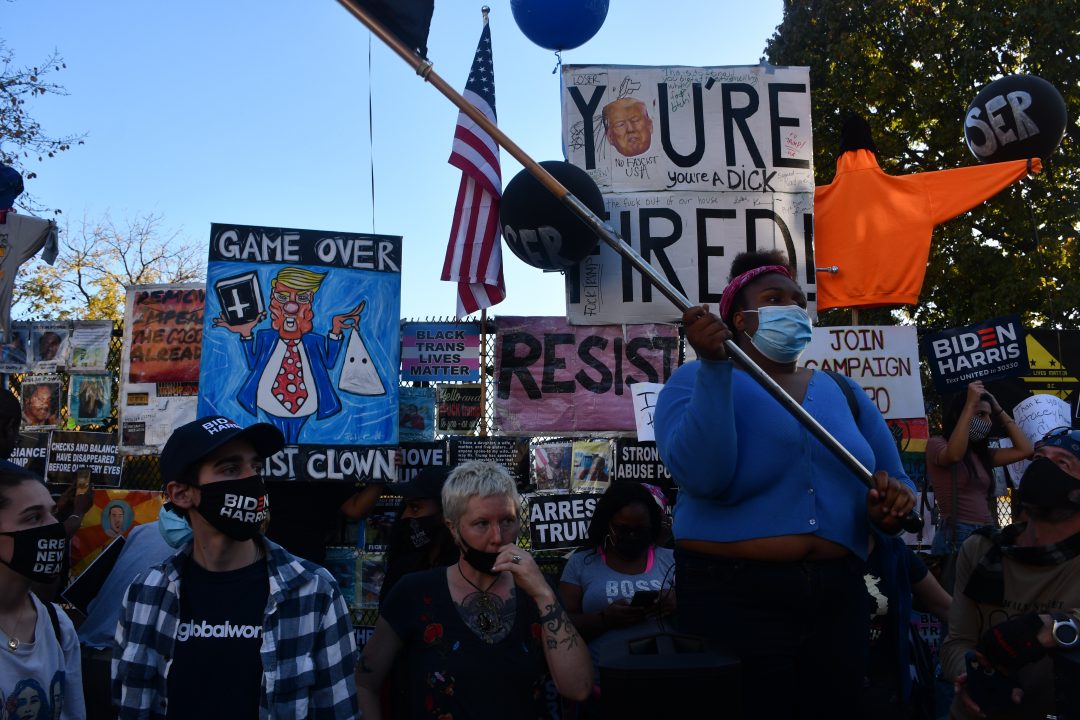 The song, “FDT” an abbreviation for “Fuck Donald Trump,” echoed from speaker systems in the streets as crowds chanted along for every single verse from, which released in March 2017 by rappers YG and Nipsey Hussle.

Amid an endless day and night of joy and jubilee, the New Black Panther Party were too busy mobilizing to celebrate even though Biden defeated Trump.

The NBPP, which had been founded in 1989 is still fighting on behalf of Black communities, calling for an end to colonialism and police brutality, among other key issues. 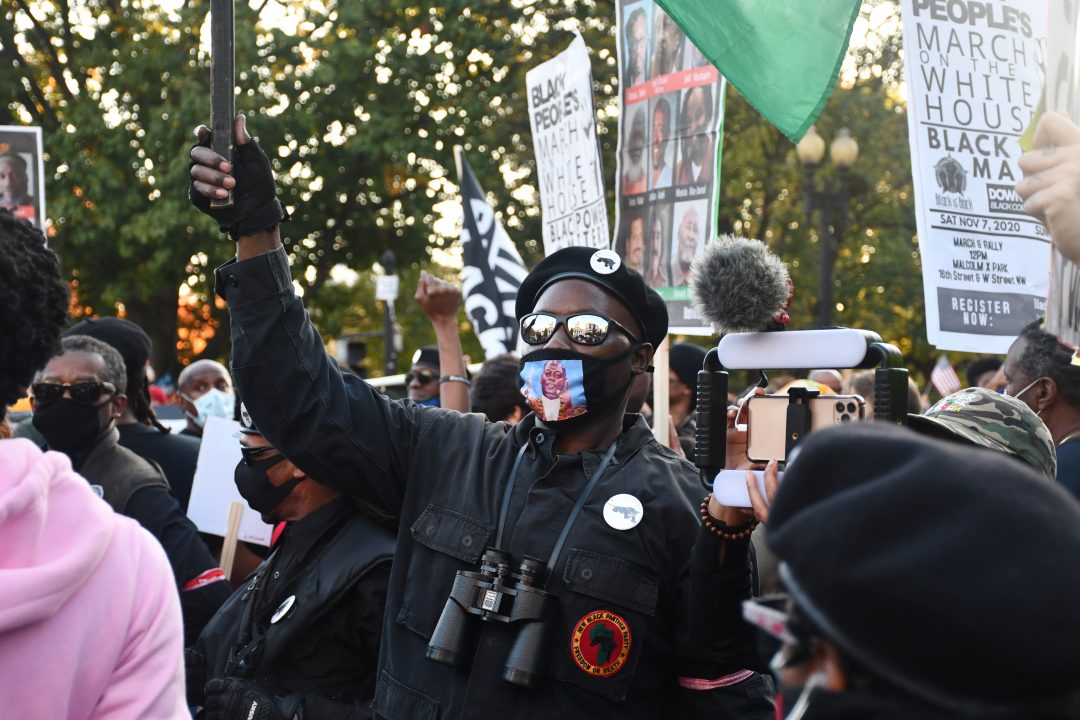 Their mission and aims remain true now while Biden and Harris are projected to enter the White House in January upon Inauguration Day even though Trump is soon to end his term as the 45th President of the United States.

Although the celebrations were peaceful, the nearly 10-feet black chain fence that separated the public from Lafayette Square and the White House had been shaken on a few occasions throughout the later hours of that evening.

Beyond that initial fence, however, another one stands just a few hundred feet away, which had been added as an additional safety precaution in the event that the first fence would fail.

Around that same time, Biden issued his victory speech in his hometown and campaign headquarters located in Wilmington, Delaware at 8 p.m.

The year of 2020 has marked many electoral milestones, especially for Harris by becoming the first woman, first Black and first South Asian vice president-elect.

Biden also broke barriers, receiving the highest total number of votes in the history of any presidential race, only ahead of Trump who came in second for the all-time record during this contentious election cycle as well. 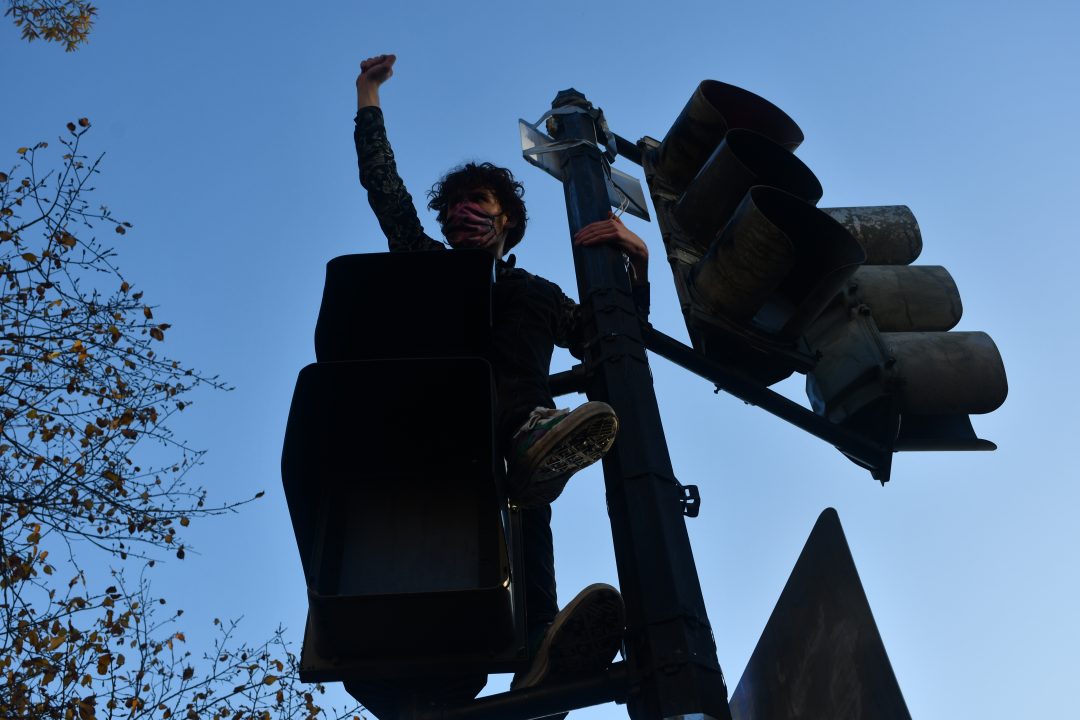 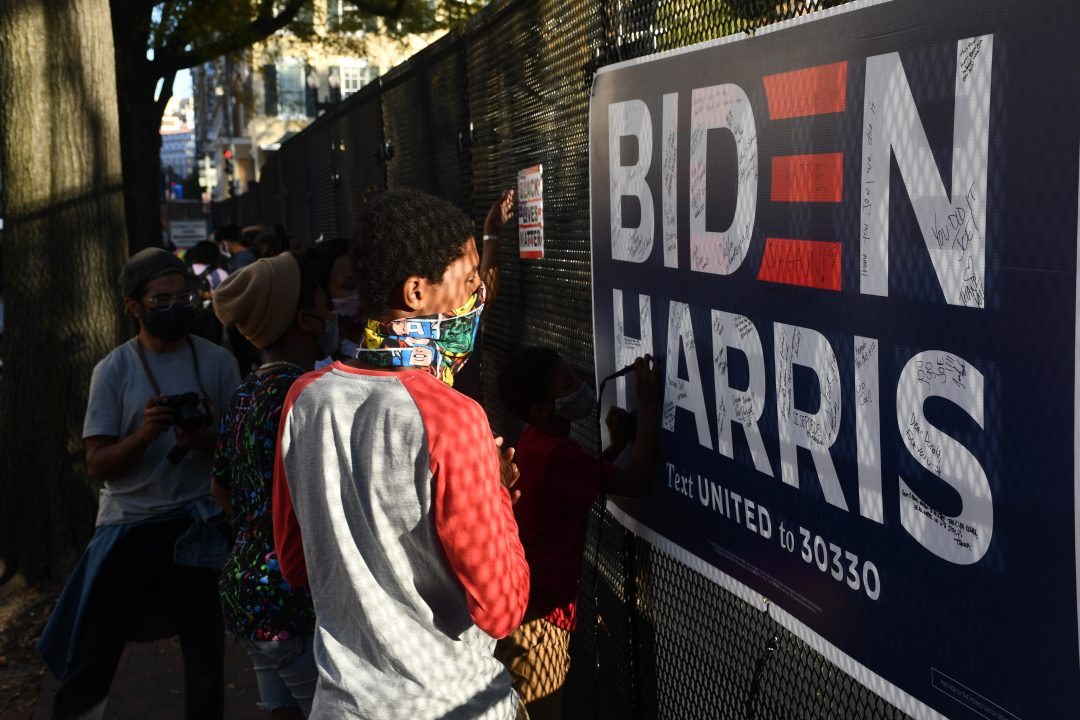 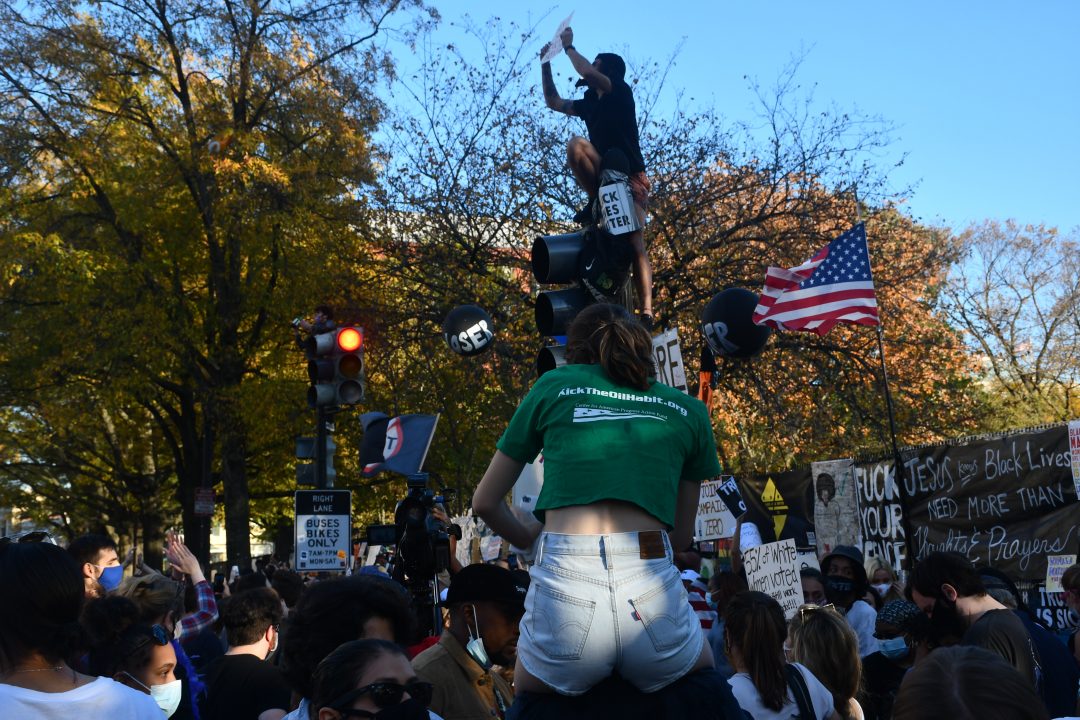 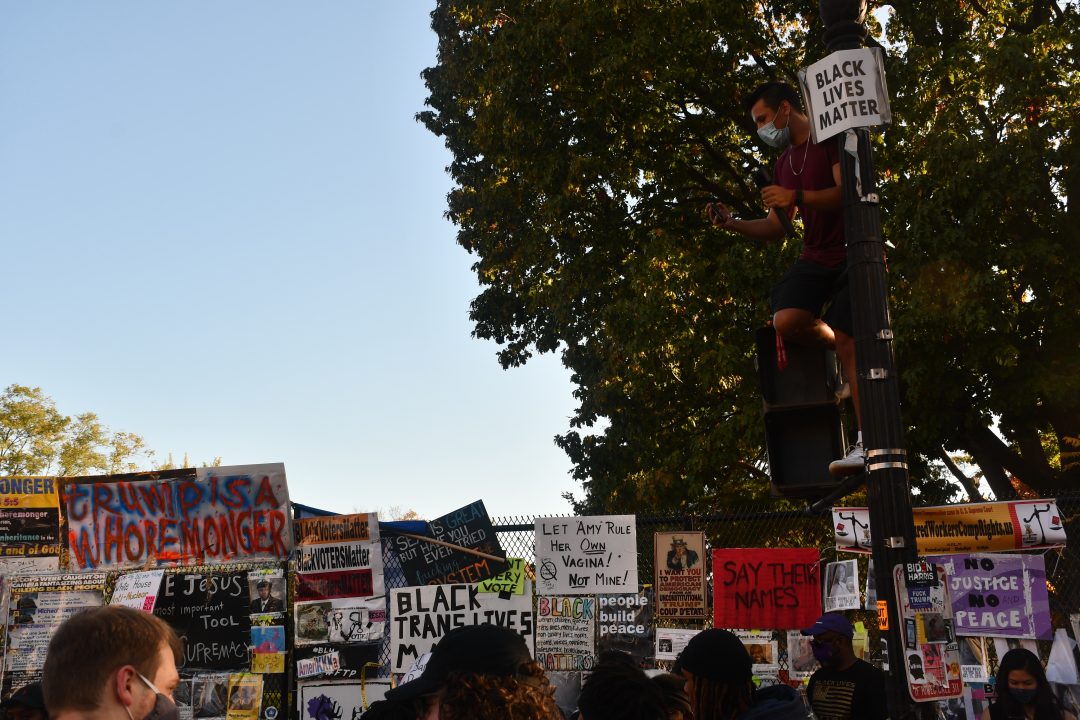 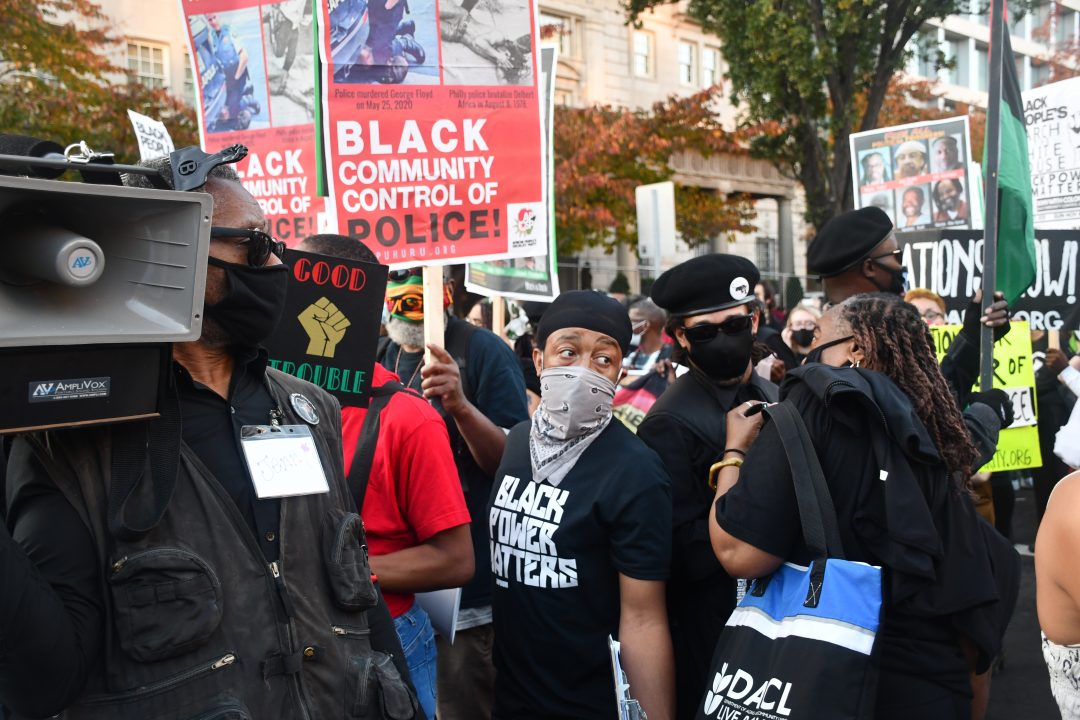 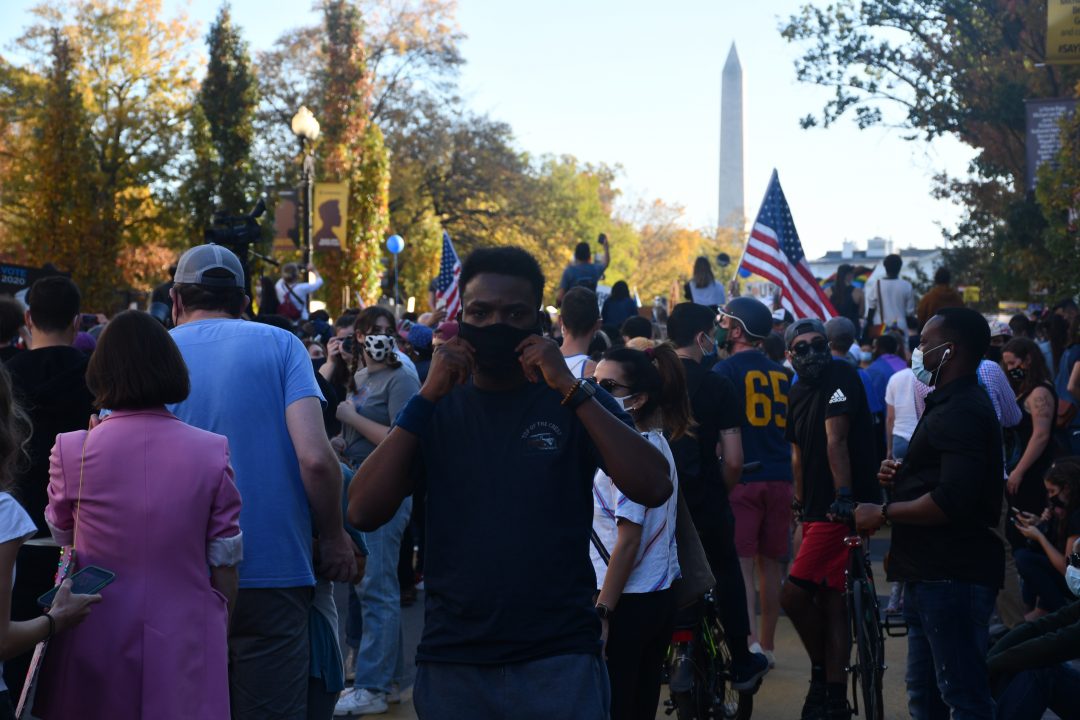