Home » Seneca County Board of Supervisors » 2022 Election: GOP candidates for governor face off in debate at Kodak Center

2022 Election: GOP candidates for governor face off in debate at Kodak Center

The four GOP candidates for governor faced off for their first debate with a live crowd at the Kodak Center on Tuesday night.

Tonight, the four Republican candidates looking to snag the nomination for governor faced off at the Kodak Center in Rochester Tuesday night. https://t.co/983envafNF

Candidates were first asked about their qualifications for governor.

Astorino highlighted his track record of getting elected twice in Westchester County as a conservative while Guiliani talked about his work in the Trump administration. Zeldin mentioned his four terms in Congress and Wilson framed himself as an outsider candidate applying his business skills to politics.

The debate is the second to last one to be held for the GOP candidates before the primary on Tuesday, June 28.

Congressman Lee Zeldin is considered the frontrunner for the GOP nomination. He came under fire during the debate for voting for former Governor Andrew Cuomo’s budget.

At the end of Tuesday’s debate, the four candidates were asked if they’d endorse the winner of the Republican primary. All of them said yes.

Hochul at least 20% ahead of all GOP candidtes for governor

A total of 1,002 Democratic voters were sampled statewide. Governor Hochul leads the pack with 54% of those surveyed saying they’d vote for her if the election were held today.

Democratic candidate Tom Suozzi trails behind at 18%, Jumaane Williams comes in at 11%, with 17% of Democrats surveyed saying they’re undecided. 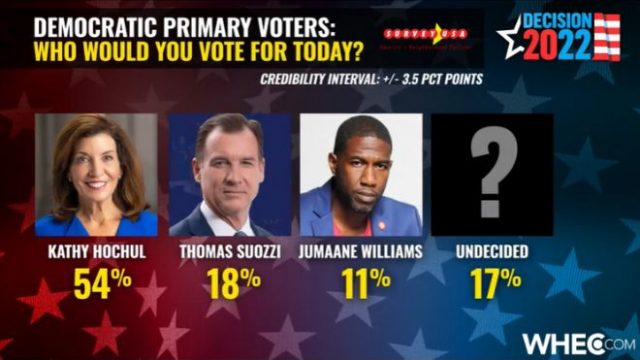 More: Siena Poll: 92% of New Yorkers say crime is a serious problem, 60% worried about being a crime victim

For Republicans, 31% said they were undecided, which is more voters than supporting any one GOP candidate. Frontrunner Zeldin came it at 25%, Guliani at 23%, Willson at 13% and Astorino at 8%. 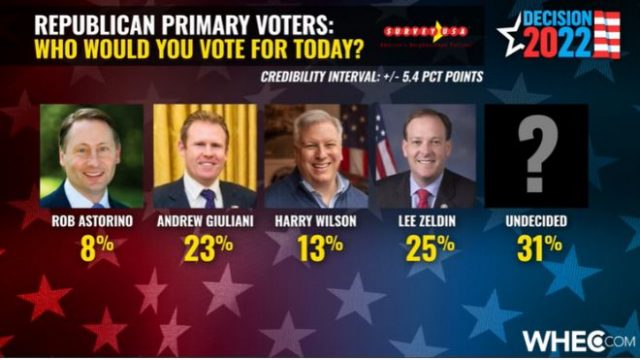 Hochul has at least a 20% lead on all Republican candidates for governor.

Check back for more coverage ahead of New York’s primary elections on Tuesday, June 28.