Siena Poll: 92% of New Yorkers say crime is a serious problem, 60% worried about being a crime victim

A majority of New Yorkers think crime is a big problem.

In fact, 60% of them in the latest Siena College poll said they were worried about being a victim of crime.

Siena College pollster Steven Greenberg said a number of measures are supported by voters, as concerns about crime rise across the state.

By 76-14%, voters say a new law requiring a permit to get a semi-automatic rifle – including  being at least 21, passing a background check and taking a safety course – will be good for New York. By a  similar 79-15% margin, voters want to see the Supreme Court uphold New York’s decades-old law requiring a  license to carry a concealed handgun.

“More than three-quarters of voters think the new law – requiring a permit to obtain a semi-automatic rifle going  forward – will be good for New York, including at least 65% of every demographic group. It’s worth noting that  67% of Republicans and 73% of gun owners (about one-fifth of all voters) think the law will be good,” Greenberg explained. “Likewise, more than three-quarters of voters want the Supreme Court to uphold New York’s decades-old law requiring a license to carry a concealed handgun, including 72% of gun owners and 79% of Republicans (even more than the 77% of independents). By a smaller, 58-24% margin, voters say outlawing body or armored vests except for law enforcement will be good for the state. Two-thirds of Democrats support the ban, as do 53% of independents, 50% of Republicans, and 54% of gun owners.” 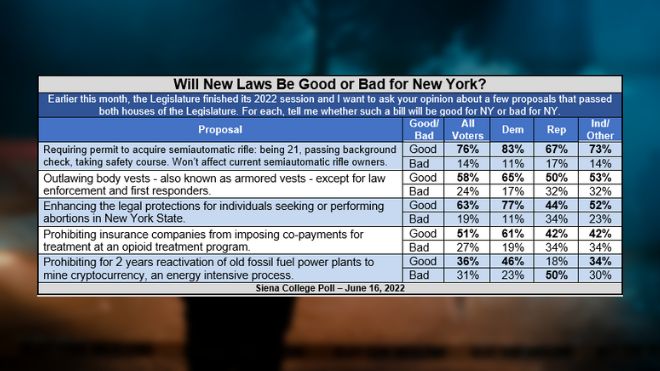 RELATED: Read the entire report from Siena on its most-recent poll on crime, guns, and abortion