Advance child tax credit payments were an integral part of the American Rescue Plan, which was approved by Congress and signed into law by President Joe Biden in March. The direct aid relief bill also sent $1,400 stimulus checks to most Americans. However, the future of the child tax credit, which was expanded to $3,600 per year faces uncertainty.

Lawmakers are wrestling with the idea of expanding it through 2022. Some existing proposals would continue the monthly payments of $250 or $300 per child until 2025. That said, there’s major hesitation among lawmakers, who raised concerns about funding the measure without raising taxes.

There’s been plenty of evidence of the advance child tax credit payments helping families. However, a new analysis raises questions about the whether extending the CTC will mean fewer people working.

Is the child tax credit hurting the labor market?

The expanded CTC has already left its mark on the economy, according to experts. Bruce Meyer, an economist and expert on poverty and social safety net programs at the University of Chicago recently told CBS that as many as 1.5 million parents could leave the workforce because of the payments.

But why? If parents are only receiving a few hundred dollars per month for each eligible child – could that be enough to prompt some to leave? If they are low wage workers – the answer is yes.

Democratic Sen. Joe Manchin, of West Virginia has suggested that a work requirement be tied to the tax credit. The CTC was expanded as part of the American Rescue Plan – bolstering its annual value from $2,000 to $3,600 per child. Half of that value was handed out in monthly payments by the IRS.

“The proposed expansion would get rid of the strong work incentives under the prior CTC; it would essentially eliminate a tax credit that encouraged work and replace it with something that discourages work,” Meyer told CBS MoneyWatch. “In the end, those at the bottom may not be better off.”

That said, the impact of the child tax credit payments has been significant.

How much has the average family benefited from the child tax credit payments?

The average family has received more than $5,000, according to a recent analysis of payments made by the IRS to CTC eligible families. Sarah Anderson, who recently spoke with Policy Watch, said that during the summer and fall months – the payments were a big help.

“It kept our family afloat, honestly,” said Anderson, whose husband works as an accountant. “It didn’t replace my income, but it’s been enough. I panicked on how to pay for back-to-school clothes.”

Some families have reported challenges getting access to the funds. However, that has largely been due to the IRS backlog of tax returns, refunds, stimulus payments, and child tax credit payments. All told, the IRS is digging out of that hole and expected to have all payments rendered by the end of the year.

Don’t worry though: Any payments that are missed can be claimed on tax returns in 2021.

By Friday the next round of child tax credit payments will be deposited into bank accounts. The official date for the payment is Friday, October 15. The deadline to opt out passed, but officials with the IRS say payments will hit bank accounts by the weekend.

Some banking institutions may release funds early. This has been a common trend across the U.S. as banks of all shapes and sizes carry individual policies on releasing money paid out by the IRS.

The next round of payments will be November 15. The deadline to unenroll is November 1. It will be the second-to-last payment for the advance child tax credit in 2021. The remainder can be claimed on 2021 tax returns filed in 2022.

Why are people opting out of the advance child tax credit payment?

The biggest reason families are opting out is due to income changes. Millions of Americans were jobless in 2020. That meant million qualified for child tax credit benefits that have since expired due to increased income. Because of this some families could owe big bucks in 2022 when tax returns are completed. To avoid it all, families have opted out, and will claim the entire tax credit in the spring if they qualify.

Will child tax credit payments get extended into 2022?

Democrats control the process. They have the numbers to get the measure across the finish line, but some moderate Democrats do not want to see such hefty spending. There is some expectation that the advance child tax credit payments will be included in one of the two remaining major bills that Congress is debating right now. Passage would take place by the end of the year. 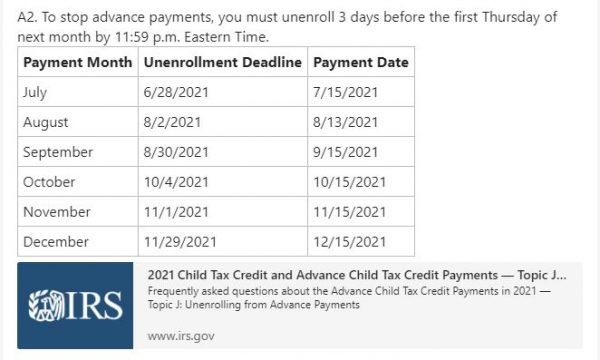