Jordan Montgomery does the job again as Yankees top Rangers, 7-1 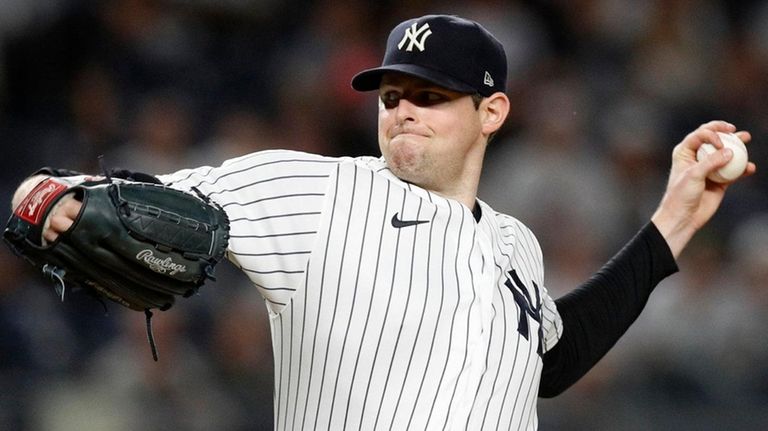 Giancarlo Stanton launched one of the hardest-hit home runs seen in the Majors this season, Joey Gallo homered against his former team and Aaron Judge launched a massive three-run shot as the Yankees muscled up for a 7-1 victory over the Rangers on Tuesday evening at Yankee Stadium.

It was the third time that Stanton, Gallo and Judge have homered in the same game, all coming within the past two weeks. The power display helped the Bombers keep pace in the American League Wild Card chase, staying 1 1/2 games behind the Red Sox and a half-game behind the Blue Jays.

“Any time we can get hot, it’s good for the team, good for the offense,” Stanton said. “It’s what we need to do, and hopefully one through nine can follow suit. We’ve got a task at hand, and we’ve got some important series coming up.”

Stanton’s 31st home run of the year was a 118.5 mph bullet that pelted the back row of the left-field grandstand, chasing Texas starter Dane Dunning in the third inning. Only the Padres’ Manny Machado (119.6 mph) and Franchy Cordero of the Red Sox (118.6 mph) have hit harder homers this year.

“You feel bad for the fans sometimes,” Judge said, with a laugh. “It just shows what this team can do. If you leave something over the middle to some of our big guys, they’re going to do damage. It’s just always fun to see that, especially when all the guys are kind of clicking.”

Gallo cracked his 38th homer of the season (and 13th as a Yankee) off Kolby Allard in the sixth inning. Judge put the game out of reach in the seventh, crushing an Allard cutter for an opposite-field three-run shot, his 36th homer of the year.

“Judge allowed us to pull away and put that game away in a lot of ways,” said Yankees manager Aaron Boone. “Stanton, I had a front-row seat to watch that thing leave in an absolute hurry. Joey’s was a majestic, high, left-handed home run into the second deck. I liked them all.”

Stanton also knocked in the game’s first run with a first-inning groundout, supporting Jordan Montgomery, who held Texas to a run on four hits over 5 2/3 innings.

Montgomery walked one and struck out six, allowing one run or fewer for the eighth time in his last 10 starts. The left-hander credited his changeup for keeping Texas off balance, believing the Rangers were hunting his curveball.