Just days before a grand jury assembles in Seneca County to start collecting testimonies that can eventually lead to criminal charges, a FingerLakes1.com investigation has revealed that the Cayuga Nation of New York has never received any federal funding through law enforcement or tribal court public law contracts, according to the U.S. Department of Interior’s Bureau of Indian Affairs.

After the initial Freedom of Information Act requests were filed through the federal agency in early February, Rebecca Smith, a tribal relations specialist at the Eastern Regional Office, explained that their office had “no records” for either request, resulting in two denial letters that were dated from Feb. 24, 2021.

Smith elaborated that the “Eastern Region does not have a Public Law 93-638 Contract with the Cayuga Nation of New York for a Law Enforcement program.”

Similarly, the exact same answer applied, but only to acknowledge that there isn’t a “Public Law 93-638 Contract with the Cayuga Nation of New York for a Tribal Court program,” either. 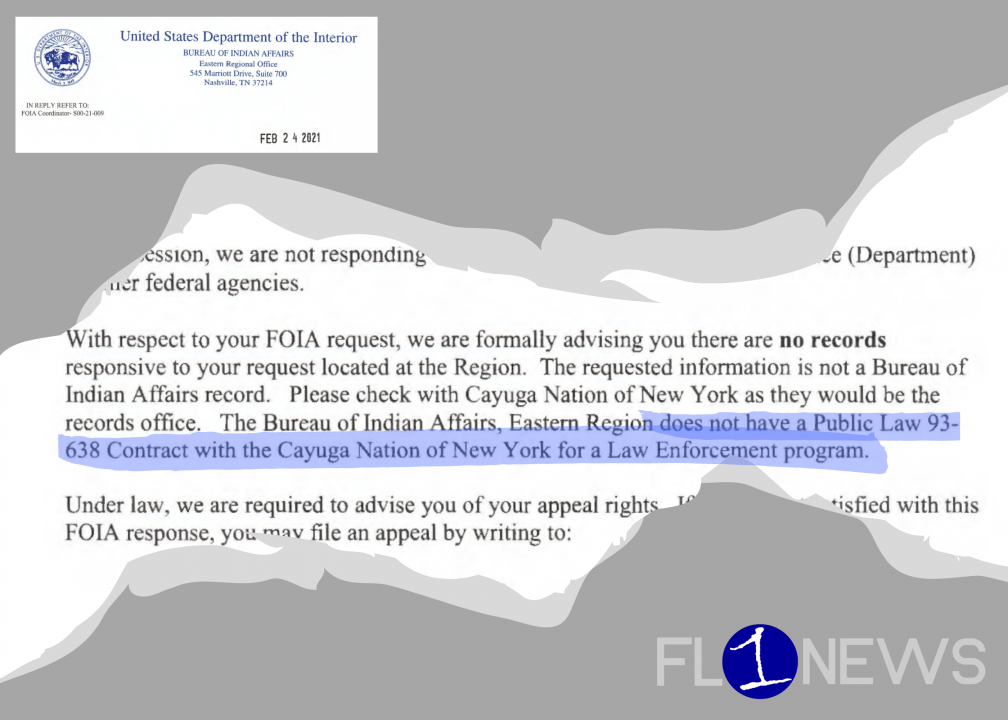 This graphic was created based on a denial letter that FingerLakes1.com received from the Bureau of Indian Affairs’ Eastern Regional Office on Feb. 24, 2021.

Public Law 93-638 is a service that’s entrenched in the Indian Self-Determination and Education Assistance Act of 1975 and 25 U.S. Code.

Public law contracts allow federally-recognized Nations to access funding through the U.S. Department of Interior and Bureau of Indian Affairs, which are then allocated to cover services that the United States government would offer its own citizens and communities — but only for reservations.

Education, transportation and infrastructure, natural resource extraction or development, law enforcement agencies and judicial systems, are all considered possible projects that the federal government may allocate taxpayer dollars toward — just to name a few.

The Nation, however, has only two current contracts with the United States through the BIA over the last five years — after filing a second FOIA request through the agency.

One of which is a transportation contract, and wouldn’t allow for any federal funding to be allocated from that designated project to the Cayuga Nation Police Department, which purportedly arrested Indigenous peoples last February, or the Justice Center that’s actively seeking to evict its own Nation-members from 14 residential properties in Seneca County.

The transportation contract had been awarded to the Nation in 2012 and has remained “dormant” since then, according to Smith.

The only other contract is called the Consolidated Tribal Government Program, or CTGP.

Essentially, this contract acts as a way to condense multiple contracts into a singular agreement in an effort “to promote Indian self determination and improve the quality of life in Tribal communities by providing greater flexibility in planning programs and meeting the needs of communities.”

“The simplified contracting procedures enhance program accountability by reducing paperwork and reporting requirements, and reduce Tribal administrative costs to allow for increased services under these contracts,” according to the BIA.

Although the actual contents of the CTGP remain unclear until a 1,00o-pages worth of records are fully retrieved from both contracts to FingerLakes1.com, Smith already confirmed that law enforcement and tribal court funding wouldn’t be covered by this other contract either.

Despite not possessing any contracts, the Nation’s police force and court system can still operate without any federal funding whatsoever.

He weighed in on the role of PL 93-638 contracts in Indian Country.

“Tribes are sovereign and have the inherent authority to create public safety programs which would include law enforcement, detention, and courts, in the absence of a self-determination contract or self-governance compact,” Conrad told FingerLakes1.com.

In accordance with the Office of Justice Services, the BIA “can provide technical assistance and training to tribes wishing to create such programs.”

“There is not any federal management or oversight of tribal programs created absent a contract or compact however the BIA OJS will, upon request, conduct program reviews and court assessments,” Conrad later continued.

He also explained that tribal law enforcement officers of programs that are created in the absence of a contract or compact are eligible to obtain credentials through the BIA OJS Special Law Enforcement Commissions, which are also known as SLECs.

However, those SLEC officers “must have a properly adjudicated background investigation as well as the minimum training and certifications required of the BIA-OJS,” according to Conrad.

This assistance program is also authorized through the aforementioned PL 93-638 contracts and 25 U.S. Code.

Since its inception, the BIA has allocated $197,486,133 for law enforcement service programs among 70 projects across the continental United States, according to GovTribe.

Federally-recognized Nation governments that are “exercising Federal criminal law enforcement authority over crimes under the Major Crimes Act (18 U.S.C. 1153) and other Federal statutes on their reservations and operating a Law Enforcement Services program” are eligible to apply for funding that may be directed toward “salaries and related expenses of criminal investigators, uniformed officers, detention officers, radio dispatchers, and administrative support.”

The Cayuga Nation of New York wasn’t named as one of those projects. Their neighbors and Keepers of the Western Door, the Seneca Nation of Indians, did, however, receive funding in the past.

In the absence of obtaining federal funds, the Cayuga Nation can supplement the costs of self-financing its entire police department and court system through the profits that are accrued by Nation-owned businesses like Lakeside Entertainment, the Class II gaming facility that’s located in the Village of Union Springs.

The chain of Lakeside Trading store locations that are scattered throughout Seneca and Cayuga counties, which are owned by Cayuga Nation Enterprises, could also serve as another possible revenue source and stream for the Nation to cover those unreported costs.

However, the specifics surrounding how the Cayuga Nation financially supports its own police department’s operations and civil court are still in question after FingerLakes1.com attempted to reach-out to Lee Alcott, the legal counsel of Clint Halftown, the Nation’s BIA federal representative — who hasn’t responded yet.

Yet, the Cayuga Nation doesn’t shy away from receiving federal monies — not only for contracted programs, but grants, too.

The Nation has been a fairly consistent recipient of the U.S. Department of Housing and Urban Development’s Indian Housing Block Grant Program since 2009 — accumulating dollar obligations in the amount of $5,872,372, which accounts for 67-percent of the Nation’s entire federal allocations.

This year alone, the Cayuga Nation has been allocated $180,000 through the IHBG following a recent announcement from U.S. Senators Chuck Schumer and Kirsten Gillibrand.

Still, a point of contention in the longstanding Cayuga Nation conflict comes from the highest court in the land: the Supreme Court of the United States.

In 2005, the City of Sherrill v. Oneida Nation of New York legal battle resulted in an 8-1 majority ruling delivered by the late Justice Ruth Bader Ginsburg, who determined that the standards of federal Indian law and federal equity precluded upon the Nation’s attempt to reassert sovereignty over previously owned lands.

Ginsburg’s majority opinion expressed the reality that regulatory authority over the land in question had been exercised by New York State and local municipalities for 200-years, considering the “distinctly non-Indian character of central New York and its inhabitants” as a part of their justification.

When the Oneida Nation sold portions of their reservation, they “relinquished governmental reins and could not regain them through open-market purchases from current titleholders,” according to the Court’s opinion.

Sixteen-years later, the Sherrill decision is still playing a prominent role in the region, as it pertains to the factionalizing Cayuga Nation leadership dispute and contested claims for sovereignty immunities, especially for defining tribal policing jurisdictions.

Some Indigenous legal experts like Gabriel Galanda, the managing lawyer at Galanda Broadman, argue that the Cayuga Nation Police Department is illegitimate and doesn’t possess any jurisdictional claim over fee lands even within a disestablished reservation because of 25 U.S. Code 232, a 1948 statute that grants New York jurisdiction “over offenses committed by or against Indians on Indian reservations within the State of New York to the same extent as the courts of the State have jurisdiction over offenses committed elsewhere.”

More recently, however, the Nation’s land-into-trust application was denied last August in a decision authored by Sweeney, the BIA’s former Assistant Secretary for Indian Affairs.

When asked about whether that 2005 Supreme Court ruling “still stands in the eyes of the U.S. Department of Interior,” Conrad stated that the agency “respectfully decline to comment.”

In the aforementioned FOIA denial letters, Smith also advised FingerLakes1.com to “please check” with the Cayuga Nation to inquire for any of the policing and court-related documents that were requested as a part of the original letters — since they’re the actual custodians of such records.

Shortly after, FingerLakes1.com asked the Cayuga Nation’s national headquarters on Mar. 26 for various Cayuga Nation Police Department documents including a department police manual, annual police reports and arrest logs from a violent brawl that ensued in Seneca Falls on Feb. 29, 2020.

There hasn’t been any determination or response from Cayuga Nation officials about whether those records will be released to the newsroom at this time.