IN-DEPTH: Cayuga Nation will attempt to take its own tenants to court this week over back rent in Seneca Falls

“They dropped the papers off at the end of the road, they’re not allowed up into the driveways on our properties.”

Along Bayard St. Ext., the Cayuga Nation Police Department arrived at the property of Warren John, a proud Cayuga, who resides in the town of Seneca Falls.

His sister, Wanda John, a Cayuga herself, wasn’t home at that time, but the officers still placed a Manila envelope inside the mailbox at the end of their driveway.

“They dropped the papers off at the end of the road, they’re not allowed up into the driveways on our properties,” John told FingerLakes1.com. 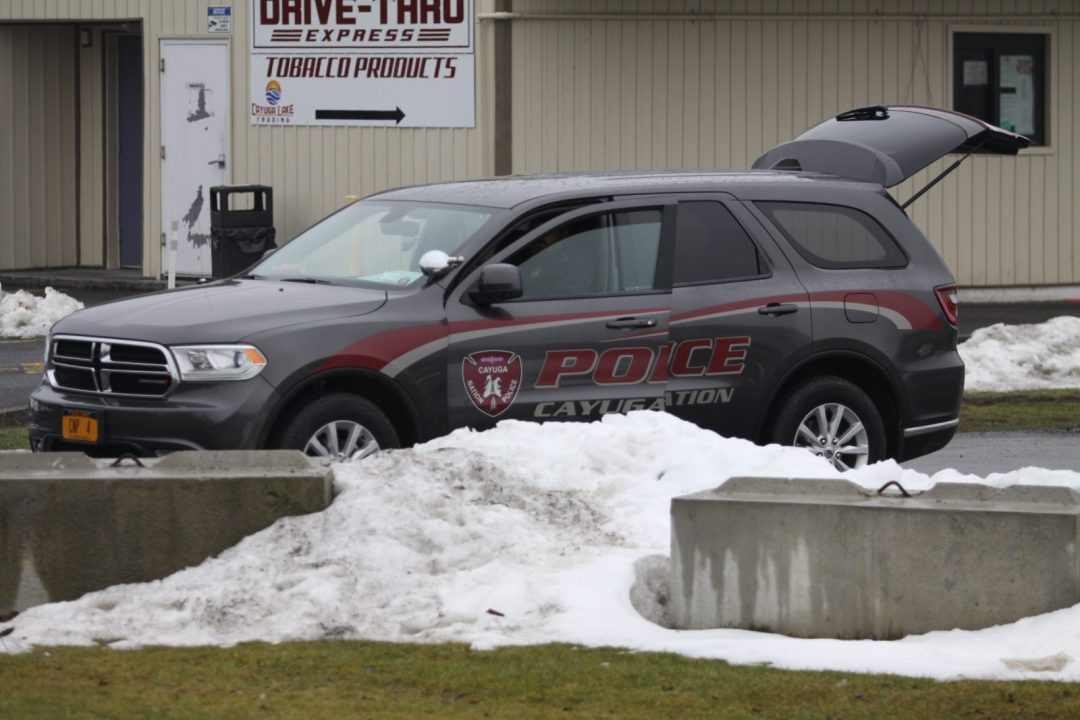 A parked Cayuga Nation police vehicle is stationed nearby the Justice Center, which is located at the Nation’s headquarters building along State Route 89 in Seneca Falls. Photo Courtesy: Greg Cotterill.

Inside the envelope contained two pages for a court petition, stating that they’re being sued for unpaid rent in the sum of $16,300.

A few weeks ago, they’ve been officially served, or so it seems.

Their property is just one of the 14 residences that have been subject to a $600,000 lawsuit, which is being conducted through the Cayuga Nation Civil Court.

The Nation-owned fee land properties, which aren’t a part of any incorporated reservation, had been and recently ruled against transferring their land into trust by the U.S. Department of Interior last summer.

That decision is at the very heart of a contentious legal schism between traditional Cayugas and the Halftown council, which has morphed from demolishing Nation-owned properties into suing and ultimately evicting delinquent rent-paying tenants.

“It’s a recognized federal reservation? I didn’t know that happened.”

Scanning the documents with her own eyes, John read the front page over the phone, which had been drafted and dated for Jan. 12, 2021.

“Please be advised the petition filed with this Court has been made returnable before the Honorable Joseph E. Fahey, justice of the Cayuga Nation Civil Court at the following date and time, Feb. 23, 2021, at 1 p.m. at 2540 State Route 89, Seneca Falls,” John said.

Underneath the Cayuga Nation crest and tribal court header, the “Justice Center” appears in burgundy font and listed at 2540 State Route 89 — the same location where the purported Cayuga Nation Police Department is stationed.

“Now, I have a problem with that, because we don’t recognize these courts because his court is not in the language, not in Gayogohó:no language. It’s in English, state crap,” she argued.

With non-Indigenous judges assuming roles in Halftown’s court, John insists that “he is not transparent, not accountable for his actions.”

In 2018, the Auburn Citizen interviewed Cayuga Nation Police Department Superintendent Mark Lincoln, who openly admitted that the details about hiring a prosecutor, defense attorney and probation officer were “very cloudy” and hangs in the balance whether the Bureau of Indian Affairs actually approves their federal land-into-trust application, which didn’t happen.

Last August, Assistant Secretary of Indian Affairs Tara Sweeney, a Trump appointee, finally ruled on that decision after waiting for 15-years in pure anticipation, footnoting FingerLakes1.com’s reporting in the process.

Basically six months later, John believes that Halftown is “confused on administrative procedure” after filing a legal suit against his own fellow Nation members.

“In these papers he handed out to everybody, he used the word: sovereignty. It’s a recognized federal reservation? I didn’t know that happened because his application relating to trust was denied,” she explained.

Lee Alcott, a partner at Barclay Damon, who also represents Halftown, explained in a recent media request to FingerLakes1.com that “the parcels are all within the Nation’s reservation, which has never been disestablished” and the properties are solely occupied by Cayuga Nation members.

A year ago, he destroyed their longhouse, which is where the clan mothers and condoled chiefs would meet to conduct their own traditional court system — a separate entity from Halftown’s one.

At one point, John joined Halftown on a phone call and asked whether he recognized the Grand Council, which is the traditional governing body of the Cayuga Nation of New York.

“He said no, he goes: that Grand Council is a joke,” she recalled.

Now, a year and a day after that destruction, he’s calling for a scheduled day in court, his own actually — and John believes it’s all just about “head games” and brings back troubling memories that are filled with pure trauma.

“I think it’s kind of like head games because it’s so close to February 22, when he destroyed everything, and more or less kind of walked away from that with a slap on his hand. Seneca County stuck up for him,” she said.

Although the Nation’s court had been established in 2018, John insists that “this will be the first-time” that its court system hears a civil case, claiming that “it’s targeted towards the community here that opposes him.”

“This is not Haudenosaunee justice or governance. It’s built on a reign of terror.”

Although Alcott mentioned in a press statement that the Cayuga Nation will not seek to evict residents yet, the current legal suit could be a precursor to eviction proceedings, according to Joe Heath.

Heath, who has served as the general counsel for the Haudenosaunee Confederacy for decades, insisted that Halftown’s actions are not in alignment with the Nation’s traditions.

Throughout his several years serving the Nations in a legal capacity, he learned that “none of these roles are defined for the last 1,000 years under traditional Haudenosaunee practice” and no governments have “a separate core,” especially when it comes to creating their own judicial branches.

Weighing on the current legal issues at hand, Heath insists that the entire process is not premised in any “traditional dispute resolution.”

“It’s the clan mothers who are tasked with the responsibility, preserving the land and protecting it for the future generations,” Heath explained.

Whenever land ownership issues arise, clan mothers and condoled chiefs would enter the longhouse and eventually try to resolve the conflict.

In the event of someone dying, there’s a 10-day mourning period and then “a dead feast” — a time when family members attempt to deal with divvying up the land assets.

“Everybody can say what they want in there, and then eventually, if necessary, the council will make a decision as to who will use that house going forward,” he explained.

Although a consensus is made, not everyone may actually agree on any particular resolution or outcome — but at least “they have a stake in the process, where they feel at least we were heard,” Heath shared. “This is the way things are supposed to work.”

In stark contrast, “here, we don’t know anything about their court,” he claimed.

And Heath asked some basic questions about Halftown’s civil court: what kind of notice is there and how are the Cayugas informed about the relevant laws at hand?

In the end, he’s ultimately worried that the court system might serve as an extension of Halftown’s authority, which in turn can further erode at the human rights of the Cayugas — just like this same-day last year on Feb. 22, 2020.

“I have seen it abused in other situations and it’s an attempt to consolidate power and to intimidate citizens,” Heath said.

“I fear it’s only going to get worse before it gets better.”

There are unofficial reports that an eminent confrontation may emerge from the court proceedings that are set to occur at 1 p.m. on Tuesday, Feb. 23.

Some who reside on the Nation-owned properties reported that they’ve already seen Cayuga Nation Police officers returning to the Seneca County area this past weekend ahead of tomorrow’s court date.

In a recent conversation with Gabriel Galanda, the managing lawyer of Galanda Broadman, he believes that “it’s only going to get worse before it gets better.”

After finding out that the properties were funded by the U.S. Department of Housing and Urban Development’s Indian Housing Block Grant program, Galanda argues that its even more of a legitimate reason for why the United States “has a moral obligation to make sure that these properties and the people living there are protected” and that “human rights violations do not ensue.”

Federal and state intervention is needed now more than ever ahead of tomorrow’s scheduled start to the Nation’s court proceedings.

Following last year’s destruction and demolition of residential and commercial properties owned by the Cayuga Nation, Galanda is adamantly concerned about what may actually happen this upcoming Tuesday.

“Now there’s a threat towards residential properties funded by the federal government. Local government can do what it needs to do as a matter of police power to, for example, erect a perimeter and protect those buildings from being assaulted, damaged or heaven forbid demolished,” Galanda told FingerLakes1.com. 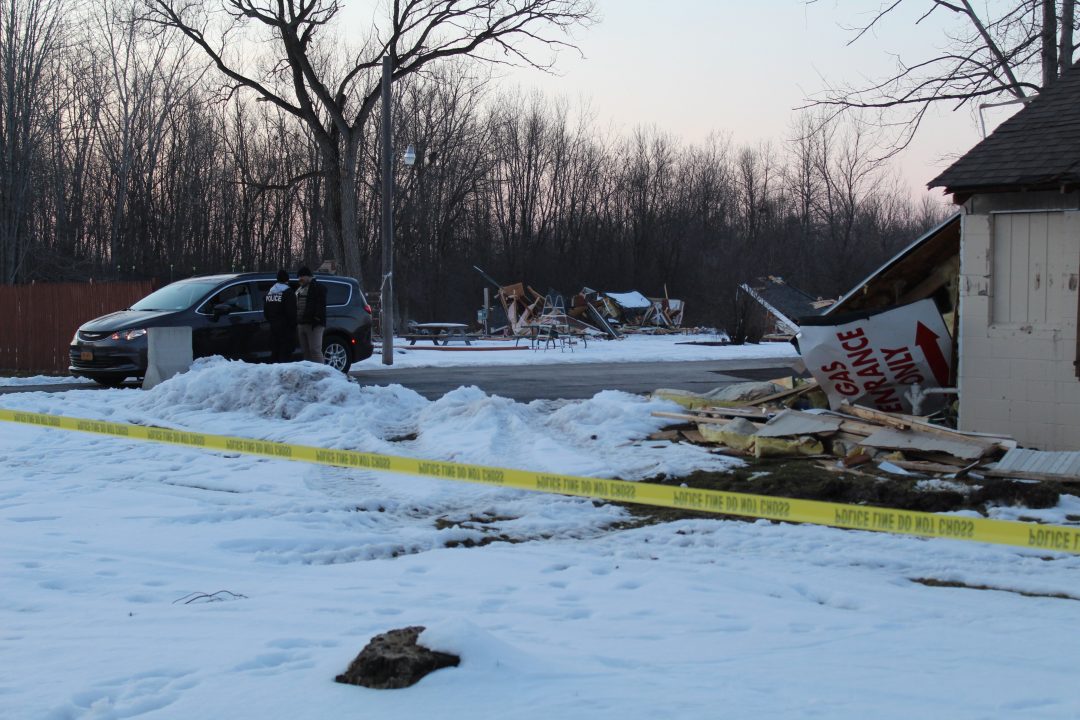 FingerLakes1.com still hasn’t heard back from Kennedy’s office after informing him about current situation with the Cayuga Nation in Seneca Falls ahead of tomorrow.

In the meantime, however, the United States is “underwriting the Halftown faction’s activities by contracting with the Cayuga Nation to fund its tribal government,” according to Galanda.

With Galanda claiming that their purported police department has been debunked as a falsehood following the recent land-into-trust denial decision by former Assistant Secretary of Indian Affairs Tara Sweeney, this issue of serving court petitions comes under critical scrutiny in his mind.

“We already know that the Cayuga Nation tribal police have no jurisdiction criminally to serve an eviction order on the people living in these homes on these lands,” he mentioned.

However, it’s still “an open question” about whether the Cayuga Nation Civil Court can even assert jurisdiction to evict residents within those 14 properties. There might be some exception, but Galanda is fairly doubtful that’s the case.

Since the properties are non-trust lands, “generally speaking, state and local land use and regulatory laws apply, and that could include an eviction moratorium,” according to Galanda.

If residents were to eventually forced off the land following the legal suit in the middle of the coronavirus pandemic amid a statewide eviction moratorium, that outcome may be considered “unlawful” and yet “another reason why this should not even be happening at this time.”

Even if the Nation had acquired the jurisdiction authority to issue a court order, it’s still unclear what changes arise from that decision.

“If the Cayuga court assumes jurisdiction and meets out some order against the individuals living there, it’s hard to say what in reality is going to change. There’s a very real possibility that nothing will change because there’s nobody with jurisdiction to ultimately carry out or enforce the order,” Galanda suggested.

In the meantime, however, Galanda insists that the United States should “consider rescinding its recognition of the Cayuga Nation for purposes of federal funding.”

“If those funds are suspended, and recognition of the Cayuga Nation is suspended by way of those funds, I assure you that there will be a change in behavior by the Halftown faction,” Galanda ended.