A heartfelt and peaceful meeting of Cayuga Nation members on Thursday at the Seneca Falls Community Center ended in chaos and a chase to Varick. It happened when unmarked Cayuga Nation Police vehicles arrived outside in the parking lot and then sped off.

Moments later, a handful of Cayuga Nation men and allies jumped into vehicles, driving-off and following them to protect a Cayuga Nation-owned property on County Road 124 in Varick where a Unity Council affiliated family resides.

In a press statement issued by Barclay Damon Partner Lee Alcott earlier Thursday afternoon titled “Cayuga Nation Federally Recognized Leadership Tells Protesters: ‘Make Your Protest Peaceful,’” he asked for peace to ensue at the meeting, even though he appeared doubtful.

“We have learned that the Unity Council, supported by those who caused the melee on our reservation on February 29, is hosting another event today. While we hope this protest will be conducted in a peaceful fashion, we have every reason to believe it will not,” Alcott wrote.

Seneca County Board of Supervisors Chairman Bob Hayssen arrived at the ‘Varick house’ after hearing about the situation. Hayssen spoke with the mobilizing Cayuga Nation traditionalists who defended and fortified the residence under the veil of darkness at night, parking vehicles to barricade driveways that lead into the property.

But before the chase, a meeting hosted by members of the traditional Cayuga Nation including Bear Clan Sachem Chief Samuel George served as a public platform and physical space that was removed from State Route 89 in order to promote sentiments of peace and hope.

Sachem Chief Sam George recalled the history of the Cayuga Nation, citing the Two Row Wampum Treaty as an intrinsic tradition of the Haudenosaunee way of life, which has been absent during this emotionally tolling and violent leadership dispute. “But what it means is that we will travel down this world this this, through this life together side by side,” George said. “You cannot come into our canoe and tell us what to do and we don’t go into your ship and tell you what to do.”

Keeping in line with Great Law of Peace, Stephen Henhawk, a former teacher at the schoolhouse followed him, claiming that the Cayuga Nation people have historically been the target of eradication efforts through colonization, even today with how Clint Halftown has erased the Nation’s cultural teachings with the destruction of a schoolhouse in Seneca Falls. 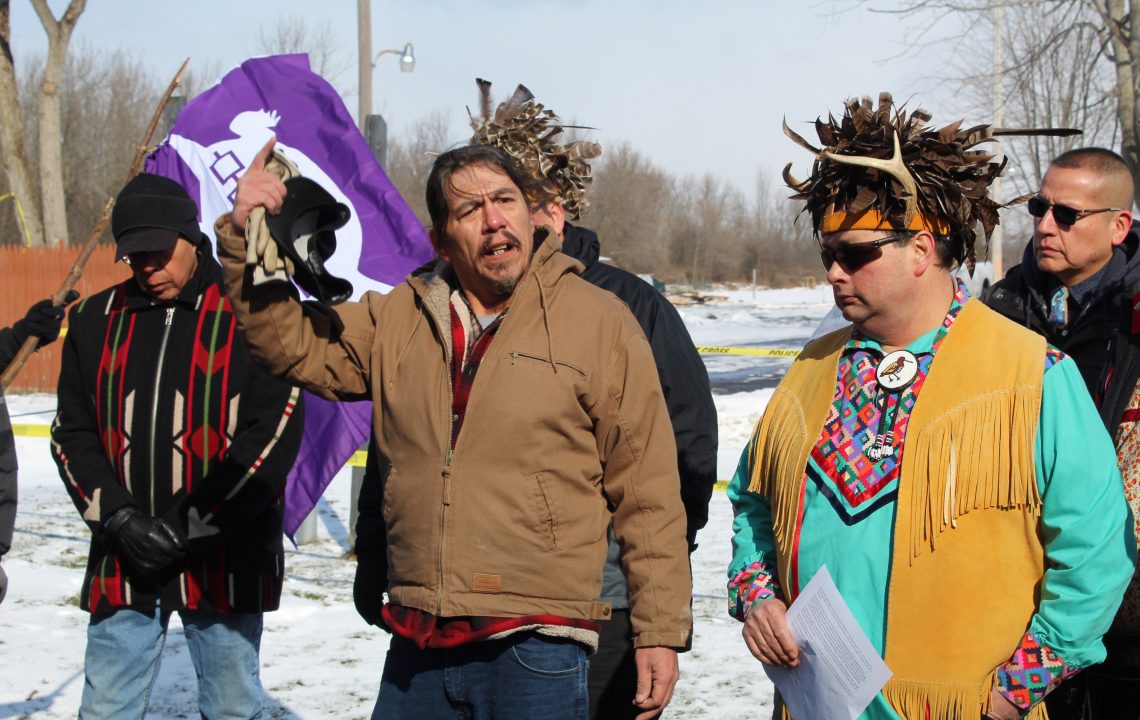 Stephen Henhawk speaks about the destruction of their homelands by the Cayuga Nation Police after reciting the Thanksgiving Address at a press conference in Seneca Falls on Saturday, February 29. Credit: Gabriel Pietrorazio, FingerLakes1.com.

“What had happened to our people is a continuing process of eradication efforts that were put forth by the government starting in 1779,” Henhawk stated.

“The final stages of colonization is when your people try to colonize you. That’s where we are right now. Our own people is trying to finish off the colonization effort,” he continued.

In an effort to remain sovereign and resist colonization, the traditional Cayuga people seek to protect their language and culture.

With only teens of fluent native speakers left and the total destruction of the schoolhouse, Henhawk’s “highly aggressive” traditional instructions have been put on hold.

After a long lineage of colonization tracing back for more than 200 years, Henhawk asserts that the Cayuga Nation will not be defeated and shall only continue to survive, especially with the rise of a stronger next generation.

For Henhawk, this latest chapter in the Cayuga Nation conflict has been costly, like war.

“They smashed the longhouse down and they left half of it up for a week, so these people could drive by there and look at it at night. They put lights on it, so that it would be a spectacle for everybody to drive by,” Henhawk said.

Someone who can attest to the experiences of war is Philip George, an Oneida and Mohawk member who double majored in International Relations and Religion Studies at the Maxwell School of Citizenship and Public Affairs and the College of Arts and Sciences at Syracuse University. Philip George, a member of the Oneida and Mohawk Nations and U.S. Army veteran, reflects on his tours while serving in Afghanistan. Credit: Gabriel Pietrorazio, FingerLakes1.com.

As a U.S. Army veteran, George served overseas with two tours in Afghanistan and shared his experiences from abroad during the public participation section of the meeting.

At the age of 12-years-old, George moved to the Oneida Nation reservation but considered that he “had to live two different lives.”

Once he became more aware of culture while living on the reservation, George proudly carried his teachings into battle throughout his ventures in Afghanistan.

Pointing to the Iroquois flag that hung to his right, George explained that he carried the purple and white colors inside his cargo pocket throughout both tours.

To this today, George has kept his Iroquois flag inside a lockbox at his house, still coated with dust from Afghanistan on it.

“I carry this flag in my left cargo pocket and I told my squad member if I died, I’m not going home with a flag of America over my coffin. I’m going with that on my coffin because I saw exactly what they’re to those people,” George recalled.

George asked the audience when will Native Americans begin to rise up against abuses of power and injustices. Calling-out his legacy which has been solely illustrated through this situation, George uttered the name of Clint Halftown for the very first time at this meeting.

“So, when it comes to this stuff over here, you’re going to leave a legacy Clint Halftown. That is your legacy right now. A community tried to build up, you could have come to them and you could have said let’s work something out. You could have when a community works together, you come together in peace, you come together in peace. That is what this represents. All of our nation’s every single one of them. The Iroquois Confederacy represents peace. That is why I brought it to Afghanistan with me, because I believed in that. I still believe it to this day. I grew up I’m just tired and I’m tired and I’m tired of my people suffering over this thing,” he said.

Charles Bowman, a Fayette resident who was detained by Cayuga Nation Police officers amid the violent brawl on February 29, also shared some brief comments during the meeting, focusing on the future and looking beyond the past. “And now what’s going to happen next is they’re going to go house to house. They’re going to tear it down and they’re going to kick these people out of their houses at gunpoint. It’s the same thing that happened in Oneida in the 90s. It’s nothing different. This is exactly where Clint is getting his model from,” Bowman said.

“They’re going to come in at gunpoint at these people’s houses with kids and every one of those houses. They will come in at gunpoint. There is no doubt. Clint tries to play “no I won’t” and Cayuga County, if you’re listening: same things gonna happen to you if he’s got stuff over there. This guy is not playing around. He’s not nice at all,” he continued.

In his closing remarks, Bowman called upon both those in attendance and watching on Facebook Live to contact governmental agents and public servant alike, including Bureau of Indian Affairs officials as well as senators and congressional representatives to correct this spiraling issue.

Wolf an advocate and supporter of the traditional Cayuga Nation peoples and their allies concluded the meeting.

“I’m Seminole Creek and I’m Irish and Scottish and in both my cultures, we’ve learned that friends and family mean something. You don’t s–t on it as Clint’s done to his people, my friends,” he shouted.

In a final call-to-action, Wolf asked for non-Native Americans to join their cause to support their neighbors in the community in any way that they possibly can.

“So, if you really want to support these people, if you really want to support the people that are your neighbors that are part of this community, then demand that the people that you put in the places that you voted them to do their f—–g job. If you want to support these people do that. The people need help. They need donations. They have kids. They have to sit in fear every single night wondering if these people are going to see here and come on to their homes and trying tide and drag them out. Because they say, oh, that’s Cayuga owned property. We can do whatever we want with it. We don’t care if you have kids, women, children. We don’t care. I’m not asking you to go over these people’s house. I’m not asking you to sit up all night with a shotgun in your lap so they can get sleep. We have those of us that are willing to do that but be a community member. Learn what the hell the word community means and act like it. If all you’ve got is negative intentions, go sit down. Mind your own business. If you have good intentions, come forth and show that you have donations reach out, we have spots for that. If you want to help in other matters, reach out,” he concluded.