After a Haudenosaunee Confederacy Grand Council session that took place on Sunday, March 1, a decision had been made to send 30 to 40 Onondaga Nation men to Seneca Falls in an effort to protect Cayuga families, according to John Kane, the host of “Let’s Talk Native.”

“The vast majority of people who are not Cayuga would love to support and help resolve the situation, and including some of the people who may be on their way now,” Kane told FingerLakes1.com in an exclusive on “Inside the FLX.” “The ultimate goal that most people have is to help. I just don’t know if sending a bunch of people on the heels of some of those violent videos out there is really a good idea.”

Aside from the Onondaga, calls were made out to certain Mohawk communities that are scattered throughout New York and even across the other side of Grand River in Canada, which has attracted the attention of the Kahnawake Warrior Society.

Authorized by the Mohawk Nation Council of Chiefs at Kahnawake, the council granted permission to form the Kahnawake Warrior Society in 1972, which sought to serve as a “defensive vanguard” as a national defense and public security force in the Kahnawake territory and even beyond.

Guided by the traditional teachings of the Kanonhsonni’kéha, or “the way of the Longhouse” while upholding the Kajanere’kówa, members of the warrior society are honor bound, focused on protecting and preserving the Mohawk and fellow sovereign Nations from tyranny and extinction.

Beyond their teachings, however, the warrior society is expected to uphold and enact “any political determinations made by the Confederacy’s Grand Council, individual National Councils, or territorial Longhouse Councils,” according to their website.

Louis Karonjaktajeh Hall, a foundational figure of the warrior society authored the Warrior’s Handbook, a pamphlet that condemned passivity that was exhibited by Iroquois leaders. Instead he advocated for the use of force whenever collective rights were at risk, which led to the formation of an active militia.

Karonjaktajeh even designed the symbolic Kahnawake Mohawk Warrior flag, which is popular in Canada whenever the flag wavers overhead during the blockading of railways, highways and even ports in support of the Wet’suwet’en First Nation’s struggle in stopping the construction of the Coastal GasLink natural gas pipeline.

The warrior society also serves as the envoys of peace in international disputes and disturbances, including the escalating intertribal conflict between two Cayuga Nation factions.

Just hours after the Saturday showdown went viral on social media, Paul Delaronde, a founding member of the first Kahnawake Warrior Society, called upon men from all across the Six Nations to “grow some” and “get out there” in a Facebook video posted by his son, Skaionwatison Delaronde.

For Delaronde, the Cayuga peoples’ struggle is a collective one and hopes that other men from the Haudenosaunee shall acknowledge the significance of mobilizing in Seneca Falls after 12 Nation-owned properties were demolished overnight on Saturday, February 22. 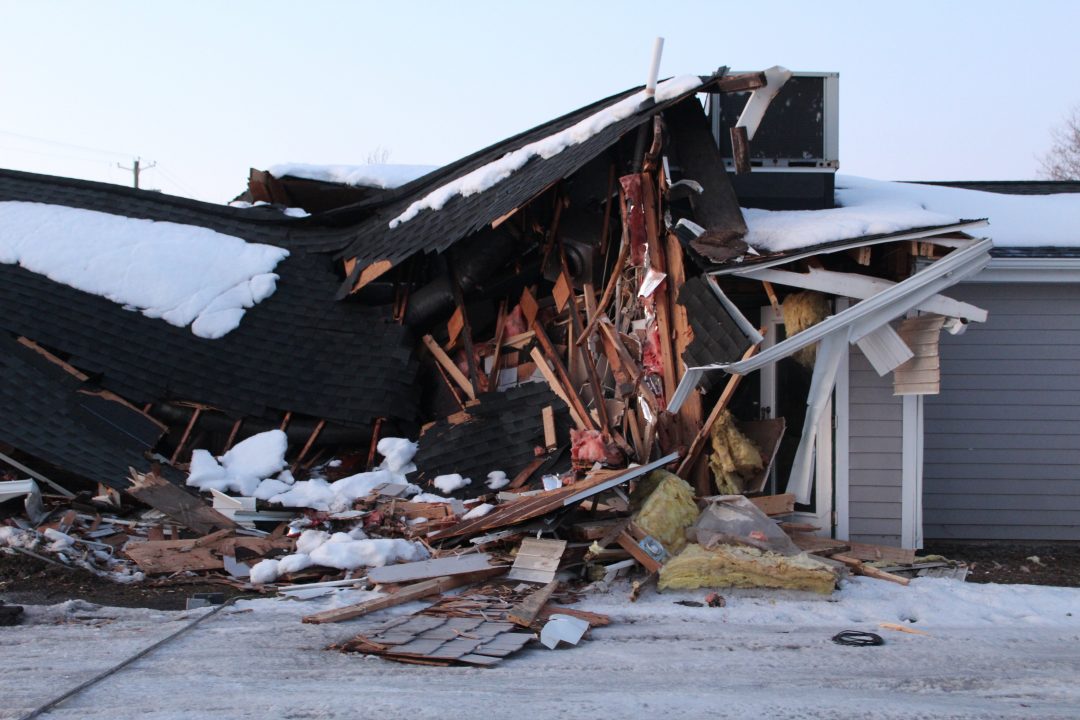 The destruction of twelve Cayuga Nation-owned properties in February 2020 stoked a far-reaching outcry among the Haudenosaunee peoples to react after the sudden, unexpected demolition of cabins, businesses, a day care and longhouse. Credit: Gabriel Pietrorazio, FingerLakes1.com.

“Don’t say it’s a Cayuga problem. No, anywhere there’s land and our people involved, it is all our problem,” Delaronde emphasized.

Reflecting on his past as a proud Kahnawake member, Delaronde wishes going back 30-years to regain his youth in an effort to stand by his fellow warriors, some of whom have already arrived and settled down on Cayuga soil, standing watch for the possibility of retaliation stemming from the Cayuga Nation Police Department.

“I mean, I wish I could go back 30-years and I would go down there, but I’m not a kid no more and I wouldn’t be much help over there,” he admitted.

His son, Skaionwatison, however, has taken his place for this journey after trekking from Mohawk territory across the Grand River — all away down to Seneca Falls — in the matter of a day.

In a Facebook Live video that aired on Monday, March 2, Delaronde called for men to come drive down to the Cayuga homelands, encouraging a visit to see the situation for themselves — just like how his father once did.

With an unknown number of Kahnawake Warrior Society members already on the ground, acting as a defensive and protective force against the Halftown faction, the call still strongly rings throughout the Six Nations.

“You all preach the good talk. Well, actions speak a lot louder and we all know that,” Delaronde said.