Tyler Dyson’s longest start of the season was also his finest. The fifth-round draft pick out of Florida went four innings of one-hit baseball to keep the Black Bears off the board and take some pressure off the Doubledays offense. While West Virginia starter Grant Ford blanked Auburn for the first two innings of the game, the Doubledays attacked first with a two-spot in the third inning and then tacked on an insurance run in the fourth. 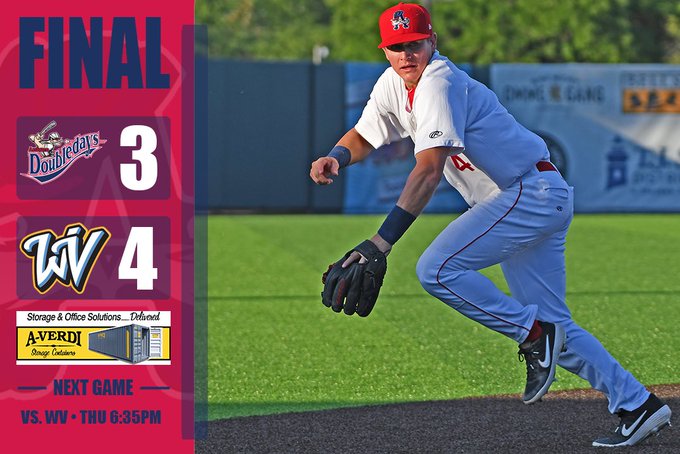 With runners at the corners and two outs, J.T. Arruda jumped on a 2-0 pitch and lined a single up the middle to score Landerson Pena. Onix Vega reloaded the bases with a knock of his own, and Jake Alu made it a 2-0 ballgame with a flyball single to center.

The Doubledays hit back-to-back singles to open up the fourth inning and loaded the bases on a fielding error from Brendt Citta. Ricardo Mendez jumped on a 1-0 pitch and reached on Citta’s miscue, allowing Perez to drive the ball deep enough to score Jack Dunn from third base on a sacrifice fly.

With Auburn now up 3-0, Tyler Yankosky entered the game in the fifth but quickly ran into trouble. Kyle Wilkie led off the inning with a single and ended up on second base after a passed ball. He advanced to third on a single by William Matthiessen and came around to score on a wild pitch. The Crosscutters brought in another run on a groundout to bring the game within one run.

Yankosky got thrown right back into the fire in the sixth inning after allowing a leadoff triple to Citta. Cory Wood singled to tie the game, and after a two-out walk, Yankosky was pulled in favor of Jordan Bocko. A wild pitch gave the Black Bears the lead, and a walk — coupled with another wild pitch — threatened to tack on some addition insurance runs. Bocko, however, was able to strike out Ethan Paul to end the inning.

Bocko settled down and blanked West Virginia the following inning and Trey Turner followed with a three-up three-down eighth, but the Doubledays offense was unable to muster anything else against the Black Bears’ pitching. West Virginia held Auburn to just two hits over the game’s final five innings while striking out six batters.

The Doubledays will be back in action Tuesday at 6:35 PM for the series finale against the Black Bears.