Cayuga County Sheriff Brian Schenck says the purpose of the event was to guide the youngsters toward making safe and healthy choices, and to show them some of what the Sheriff’s Department does each day.

Camp Y-Owasco staffers, led by Director Melissa Cartner, guided attendees from station to station. The kids were introduced to an anti-bullying initiative known as Teamwork, Honesty, Respect, Empathy, Awareness, Discipline, or T.H.R.E.A.D, by Nick Smith from Nick’s Ride 4 Friends, an agency that fights against drug addiction. Sergeant Myers from the Sheriff’s Department demonstrated a robot used by the Department’s Tactical Team. 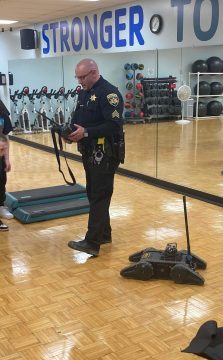 After the formal presentations, the kids had time to be kids, watching a movie while enjoying some popcorn or pizza and taking part in a number of other activities. The YMCA plans to hold another similar event in the fall.