I’ve stopped in at Naked Dove just about every Friday for the last ten years or so, and have had many pleasant conversations with co-founder Dave Schlosser, so I decided it was time do it with the microphone.

The business was very different when Naked Dove opened as the first craft brewery in Ontario County and the 44th in the state of New York. Breweries weren’t yet allowed to serve pints. Customers drank flights of small pours of several beers. Many were just learning about the whole craft beer thing and breweries took on a classroom atmosphere. Many times, you would be served by an owner or brewer and could ask questions and learn about the beers. Microbreweries weren’t like bars and the brewpub hadn’t really been invented yet, so you might get a bag of chips with your tasting.

Naked Dove has grown slowly and deliberately, lining up bar and restaurant accounts at a time when many breweries relied heavily or solely on their tasting rooms for income. A few years ago, Naked Dove began canning their beers for sale in places like Wegmans.

We talked about Dave’s brewing philosophy, which is to make the classic styles and make them well. He comes from both a home and corporate brewing background, working at Genesee, Rohrbach and Custom Brewcrafters, which in its heyday, made beers under contract for a lot of places that served beer, but lacked the resources or expertise to brew their own. Naked Dove won gold medals for its 45 Fathoms Porter, which I believe has been on tap since day one, as well as for its The Goat bock beer and a silver for a personal favorite, the Russian Imperial stout. The Dove also recently launched series of Kolsch beers and another of different versions of the ever popular IPA.

The tasting room carries ciders and other choices for the non-beer drinker (I’ve heard there are such people) and snack foods including Muranda cheese. There’s also a line of Naked Dove merchanside. The tasting room is undergoing some renovations to create more space and outdoor seating will expand this summer, if we ever have one. The back room is also used for events, like the popular Nachtober Fest. The servers are always friendly and knowledgeable and the beer is fantastic.

Canandaigua probably has more good beer choices in a small geographic area than anywhere in the state. If you haven’t yet, add Naked Dove to your list of must visits. 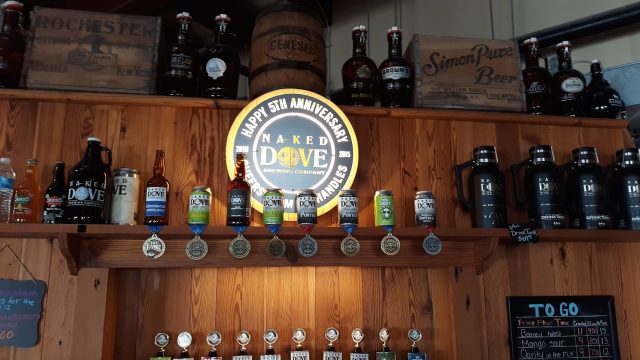