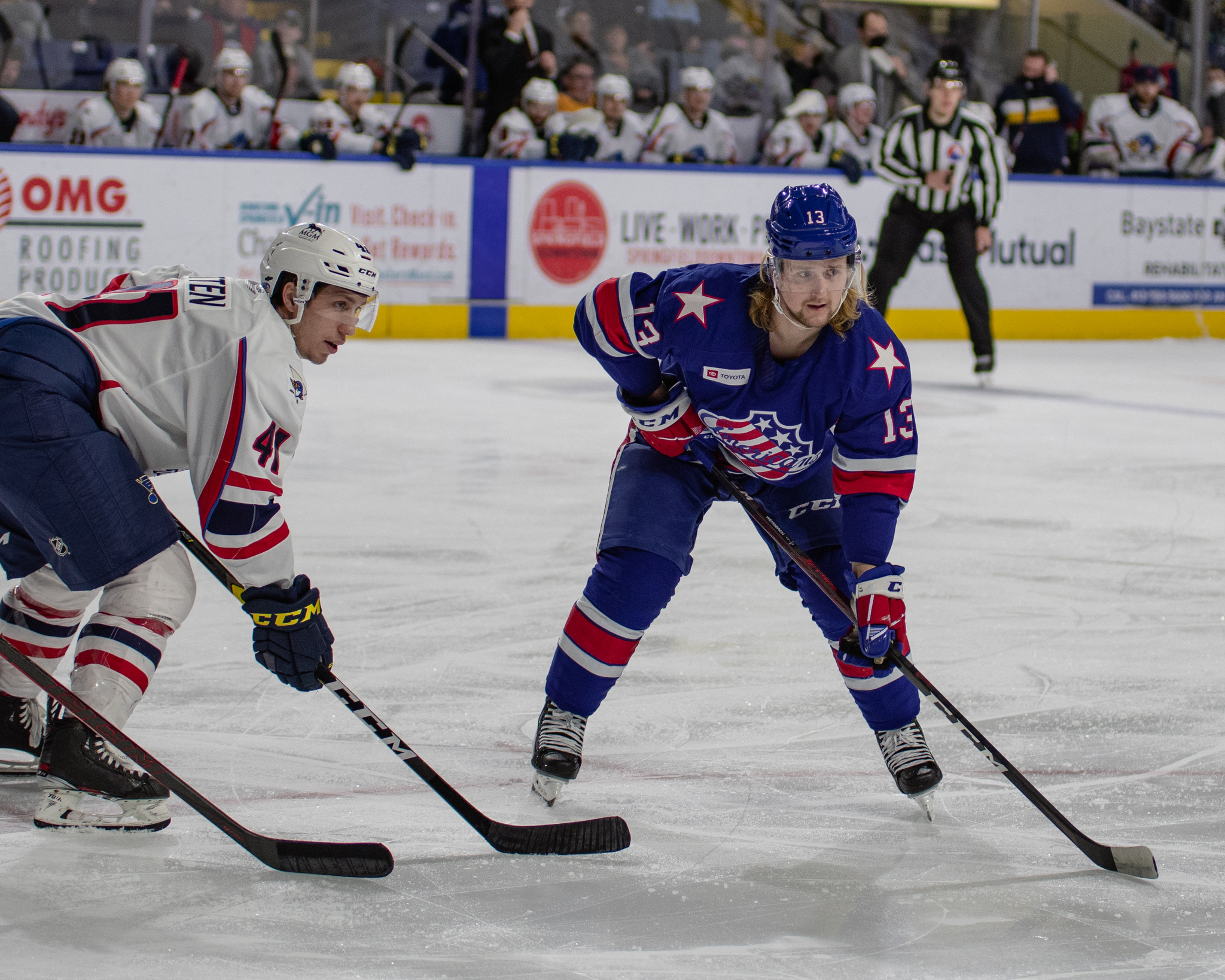 The Rochester Americans (16-9-0-0) led 3-2 after the second period but were unable to fend off a late game comeback by the Springfield Thunderbirds (17-7-2-1), who scored three unanswered goals in the first five minutes of the third period to come away with a 5-3 win in a New Year’s Day matinee Saturday at MassMutual Center.

The Amerks, who came into the matchup with an 8-2-0-0 mark in their last 10 games, saw their three-game win streak come to an end. The loss drops Rochester to 2-2-1-0 in its last five meetings in Springfield over the last five seasons.

Forward JJ Peterka, who was assigned by the Buffalo Sabres along with Brandon Biro, Arttu Ruotsalainen and Oskari Laaksonen prior to the game, factored in on all three Rochester goals by producing a game-high three points (1+2). Biro netted a pair of assists to record his third two-point effort over his last five games dating back to Dec. 15. Linus Weissbach and Mason Jobst both scored their fifth and third goals of the season, respectively, to complete the scoring.

Goaltender Michael Houser (4-2-0) appeared in his eighth game of the season for Rochester, and despite making 26 saves, suffered his second loss of the slate.

Forwards Sam Anas (1+1), Will Bitten (1+1) Matthew Peca (2+0) and Steven Santini (0+2) all chipped in two points to help the Thunderbirds improve to 3-0-0-1 in their last four games and earn their league-leading 11th home win. Keean Washkurak rounded out the scoring as he tallied his eighth of the campaign in the first period.

Rookie netminder Joel Hofer picked up his eighth win of the season, which is tied for third among all first-year goaltenders, as he made 30 saves. Since going 0-3-1 from Nov. 26 to Dec.17, the 22-year-old has recorded three straight victories in his last three appearances.

Prior to the end of the second period, the Amerks were whistled for a hooking infraction with just 11 seconds remaining while holding a 3-2 cushion.

Springfield tied the contest in the first minute of the third before adding two more just 44 seconds apart to grab a 5-3 lead with 15:13 left in regulation.

With a face-off to the left of Houser, the Amerks lost the draw before Mackenzie MacEachern centered a pass to Bitten from the corner to give the Thunderbirds their second lead of the contest. On the ensuing shift, Santini flicked a shot from atop the point towards the Rochester netminder. As the shot made its way through traffic, Bitten flagged it down before Peca shoveled it into the net to give Springfield a 5-3 advantage.

Rochester pressed in the final 15 minutes to pull within one, and despite outshooting the Thunderbirds 14-7 in the frame, and pulling Houser for the final four-plus minutes, Springfield would not budge.

In the first period, after gathering the loose puck inside the Amerks end of the ice, David Drake, who made his Rochester debut earlier in the week, hit Biro near the center-ice logo with an outlet pass. As Biro scooped up the puck, he backhanded it into the offensive zone for Peterka and Weissbach. As Peterka drew the attention of the defenseman, he pushed the puck to Weissbach to open the scoring just 4:31 into the contest.

Springfield, however, responded with a pair of tallies 53 seconds apart to take a 2-1 lead as Washkurak redirected in a point shot and Anas capitalized on a turnover inside the Rochester zone.

The Amerks countered back with two unanswered goals of their own to take a 3-2 lead into the first intermission.

On the tying marker at the 10:59 mark of the stanza, Butrus Ghafari, one of the many Amerks newcomers up from the ECHL, sprung Peterka going one-on-one with a Thunderbirds defender. As Peterka reached the top of the circles and the puck just to his right, the rookie forward dove and backhanded a shot under the cross-bar as he was falling to the ice for his fifth of the campaign.

The primary assist from Ghafari marked his first AHL point after making his debut earlier this week against Providence.

Less than five minutes later while Rochester was on the power-play, Peterka was hammered into the boards, prompting a delayed call. While on the delayed infraction, Laaksonen slid a pass to Jobst just inside the left point. With his head up, Jobst centered a pass to Mersch but the puck glanced off his skate and went to Peterka at the far circle. Much like his first assist, Peterka drew all the attention of the Thunderbirds and sent a cross-crease pass back to Jobst to complete the scoring in the period.

With the power-play goal, Rochester has scored 25 goals on the man-advantage this season, which is second most to Springfield. Equally as impressive, the Amerks have gone 18-for-53 (33.9%) over their last 14 games dating back to Nov. 17 and maintain the top power-play unit in the AHL with a league-best 27.8% conversion rate.

Mersch, meanwhile, has totaled 28 points (16+12) and seven multi-point outings over his last 22 games to become just the second player in the AHL and first Amerk this season to reach the 30-point mark.

The Amerks close out their two-game New England road swing on Sunday, Jan. 2 when they take on the Hartford Wolf Pack at XL Center. The puck will drop at 3 p.m.