“For conspicuous bravery and coolness displayed while shooting hostile Indians”

Captain Winfield S. Edgerly, commander of the Army’s G Troop 7th Cavalry Regiment at the Battle of Wounded Knee, sat down at his officer desk inside Fort Riley, Kansas, to write Medal of Honor recommendations on March 18, 1891.

First Sergeant Frederick Ernest Toy, a 25-year-old Buffalo native, was one of them.

The troop commander was thoroughly impressed with Toy’s performance on the blood-stained battlefield of the Pine Ridge Reservation in South Dakota, touting his quick-wit and sharpshooting skills as enduring acts of heroism in the service of his country. 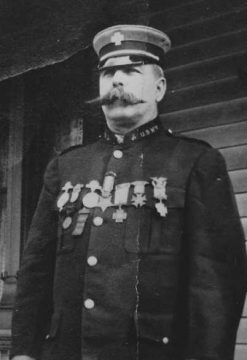 Frederick Ernest Toy, a decorated Army veteran, earned the Medal of Honor for his service at Wounded Knee. (Courtesy of Ancestry.com)

A speedily processed recommendation letter worked its way up the military chain of command, eventually reaching the U.S. Army headquarters in the nation’s capital.

The Assistant Adjutant General promptly wrote in response to Edgerly’s letter, claiming: “The circumstances of this service are not so specifically stated as to justify action.”

But a persistent captain wouldn’t stop there, sending a second letter just a month later, coupled with an even more scrupulous explanation of Toy’s accolades.

“The fight was unexpected and I saw the sergeant deliberately aim at and hit two Indians who had run into the ravine; his coolness and bravery exciting my admiration at the time,” Edgerly double-downed. “I don’t believe in conferring medals indiscriminately, and for ordinary bravery; if I did, I would recommend about forty men of my troop for their splendid conduct on the 29th & 30th of December, 1890, but I believe that 1st Sergeant Toy deserves the honor for which I recommended him.”

Edgerly eventually got his wish granted on May 12 when Major General John M. Schofield approved the appeal alongside Acting Secretary of War Lewis A. Grant.

Toy, the eldest of four siblings and son of Prussian immigrants, was given the Medal of Honor for his involvement at the Battle of Wounded Knee, now dubbed the Wounded Knee Massacre.

He reenlisted six-times during the span of two decades, serving in the Spanish-American War and even World War I after becoming a transport quartermaster with a captain’s commission while stationed in Brest, France.

Even after a decorated career of military service, Toy picked up the moniker “Major” in his civilian life while living in Youngstown and serving as a lieutenant of the New York Central Railroad Police Department.

In 1932, Toy was even promoted from master sergeant to captain on the retired list by an act of Congress.

The Niagara Falls Gazette characterized Toy as “a gallant soldier and a widely popular and highly respected citizen” in an obituary-stylized article just a few days after his death at the age of 68 in Youngstown, New York, on Aug. 5, 1933.

“In his demise he leaves behind a most creditable record which will mark his memory years to come,” the article ended.

“I felt a little offended by this… Back home, our people are upset.”

Venturing far from his homeland — he came only to see a plaque honoring Toy’s military service during the Wounded Knee campaign — a violent conflict causing the deaths of as many as 300 Lakota peoples.

“My great-grandfather survived Wounded Knee. I feel a little offended by this,” Bear Cross admitted. “I’m not here to destroy anything, but I’m here to disagree. Back home, our people are upset.”

He asked: “Why would you give somebody a piece of medal for gunning down unarmed men, women and children, and placing them in a mass grave?”

The Remove the Stain Act seeks to “revoke and tell the truth” about “a deplorable act,” as Chase Iron Eyes, an attorney for the Lakota People’s Law Project, added.

The reintroduced bill now sitting before Congress would “revoke Medal of Honor from soldiers who slaughtered hundreds of Lakota men, women, and children at the Wounded Knee massacre.”

In September, the House of Representatives passed the 2022 National Defense Authorization Act, which included an amendment for the Remove the Stain Act. Act. But the bill was apparently omitted from the stalling version that passed the Senate earlier this month in mid-December.

Senator Elizabeth Warren, D-Ma., joined by other Democrats recently sent a letter to President Joe Biden, insisting for him to invoke his executive privilege powers to personally revoke the medals all by himself without requiring any consensus in Washington.

“I don’t know Sergeant Frederick Toy’s descendants, but if he was my grandfather, I would not want to take any dignity or credit for what happened there,” Iron Eyes said on the windy Monday morning Niagara Falls.

“We acknowledge it is time to make modest but key steps to help set things right.”

Edward Feigenbaum II, a great-grandson of Toy, inherited his medal. He still proudly displays the military decoration at his residence alongside Erlinda, his wife, once writing, “his legacy will always be revered.”

But the rest of his family isn’t in total agreement either.

It’s a reality shared between Barnes and her three sisters: Johanna Wilkinson, Rebecca Mansir and Sarah Clapham, all of whom recently reconnected when FingerLakes1.com reached out, asking about their accomplished relative.

“As great-granddaughters of Frederick Toy, it’s impossible for us to comment on his life. Four or five generations apart, he’s not of our times nor are we of his,” Barnes told FingerLakes1.com. “We do, however, agree with the efforts to retract the Medals of Honor, to move the memorial in Niagara Falls, and to have fresh conversations about these and other connected issues.” 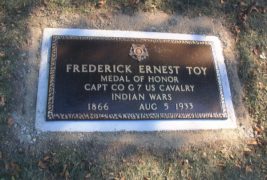 The human remains of Frederick E. Toy are buried at the Riverdale Cemetery in Lewiston, New York. (Courtesy of Ancestry.com)

Barnes remembers when her father, John Barnes, a social studies and English teacher at the Holland Patent Central School, took her on trips throughout Upstate New York.

Following in her father’s footsteps, she became a fanatic of history, too, earning a Master’s of Arts in American history from the University of Maine in 2000.

As a lifelong American Legion member who invaded Omaha Beach as a private with the 29th Infantry Division during D-Day, she admires her father’s wartime service.

Still, she remains conscientious of the changing times, acknowledging her great-grandfather’s fatal contribution during a massacre at Wounded Knee.

“We cherish family and country — knowing all our families and our country have been through struggles and accomplishments,” she later added. “We acknowledge it is time to make modest but key steps to help set things right.”

Paul Winnie, an enrolled member of the Tonawanda Seneca Nation who has been pressuring to remove the plaque, says the family’s response is “very heartwarming” by bringing the community “one step closer to reconciliation.”

“That’ll help the Niagara Falls Veterans Memorial Commission ease that decision to get the job done,” Winnie told FingerLakes1.com upon learning about the remarks.

Winnie hopes the City of Niagara Falls will create a public spectacle that invites “full disclosure and healing” if the memorial commission agrees to remove the plaque.

Even though some of Toy’s descendants have agreed to support rescinding the prestigious Medal of Honor he was awarded 130-years-ago; the fight is far from over.