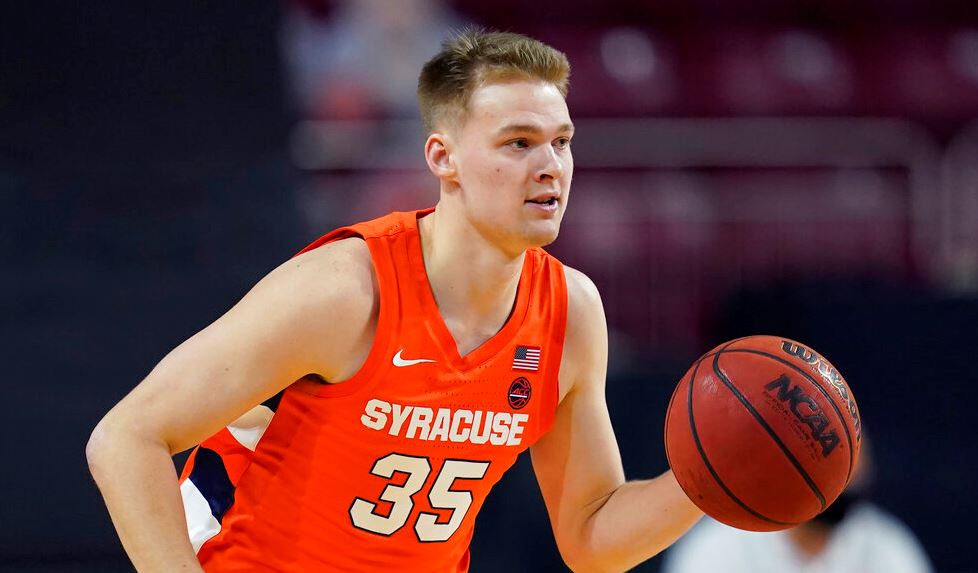 The Syracuse men’s basketball program is on a COVID-19 pause after most of the starting lineup tested positive last week, Buddy Boeheim said in a radio appearance on Monday morning. Speaking with Gomez and Friends on TK99, the senior guard explained that his older brother, Jimmy Boeheim, as well as Cole Swider were among the initial SU players to test positive after the team lost to Georgetown on Dec. 11.

Then he and Joseph Girard also tested positive late last week, leading to a break in team activities and, in turn, the postponement of matchups against Lehigh and Cornell.

“We were practicing last week, the whole week, even with Jimmy and Cole out at first and then guys started to test positive more and more throughout the week,” Boeheim said. “We had 12, 13 guys and said, ‘Alright, we’re going to keep going and if more people end up positive, we’re going to have to cancel the game.’ And then last week around Thursday, I think me and Joe both found out we had it. Then we kind of had to cancel both games. And Cornell’s obviously going through a surge right now with their campus, and knew it was probably unlikely.”

SU Athletics previously announced that Syracuse’s games were postponed, though a team spokesperson declined to specify why and whether the team was still practicing. Boeheim said that individuals who’ve tested positive, like himself, are isolating and recovering while negative testers are allowed to go to the Carmelo K. Anthony Center for individual workouts.

Personally, Boeheim, said he’s been able to work out in his bedroom at the family home. He described his symptoms as “much milder” than the ones he experienced around this time last year.

“Just tired,” Boeheim said. “A headache here or there, but nothing crazy. No loss of taste or smell, which was my biggest concern. Feeling good so far.”

Boeheim, who had to isolate in the guest room during Christmas last year, said he’ll be cleared to come into close contact with others again on Thursday. Until then, his mother, Juli Boeheim, is bringing his meals to the door. Boeheim said he spends most of his down time streaming shows, most recently Money Heist.


The plan, Boeheim said, is for practice to resume on Dec. 23, six days before the Orange (5-5, 1-0) starts its Atlantic Coast Conference schedule in full with a home game against Georgia Tech. SU is exploring the possibility of scheduling another game for Dec. 26 or 27.

“We talked about that a little, just seeing if we can get a game in,” Boeheim said. “If it’s the 26th or 27th, whatever it may be. But you never know with that. It’s a long shot, but we’re going to see if any teams are available. As of now, no, but it’s definitely a possibility.”

When the team does return to the court, Syracuse will look to rebound from consecutive losses and tighten up its second-half defense. Boeheim thought the group’s practices last week were beneficial, even if the unit was shorthanded.

“I think when we all get back later in the week, we’ll have some really good practices,” Boeheim said. “And we need that before conference play because you don’t get that much time in between games during that time.”