Amerks close out road trip with win over Hershey 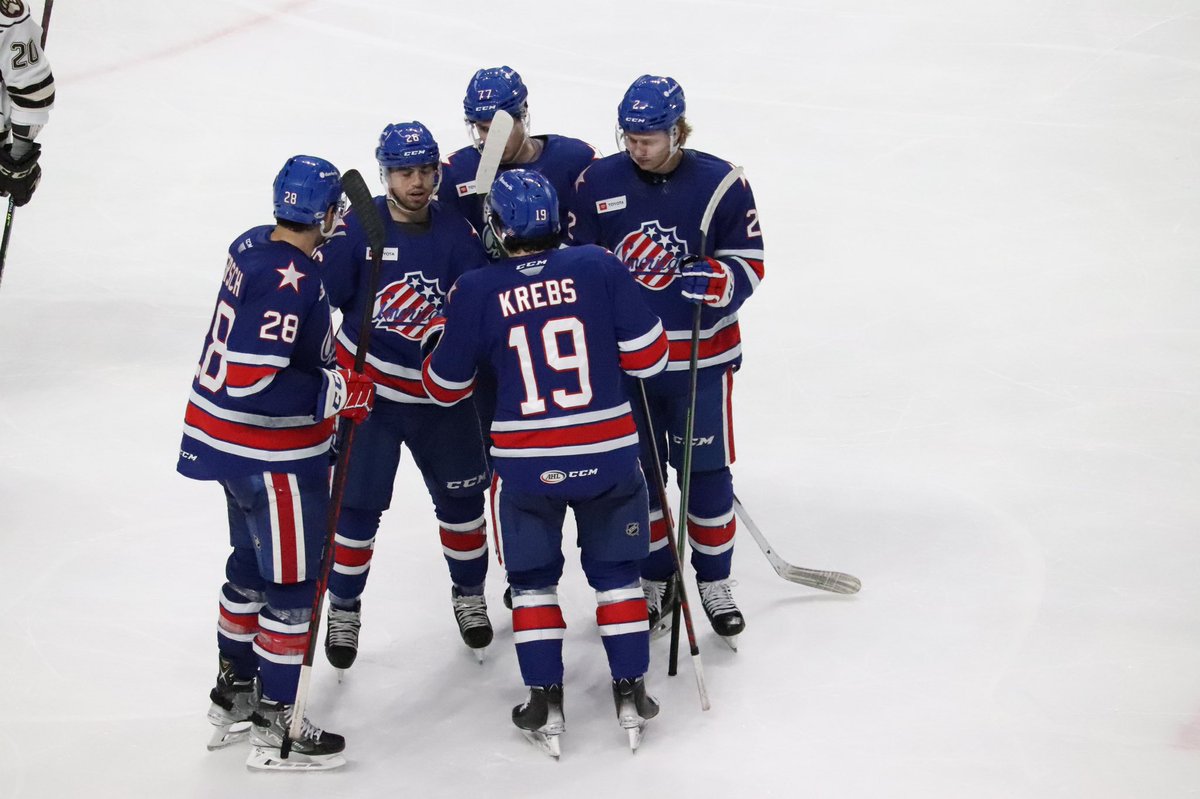 Trailing 3-1 in the opening minute of the third period, the Rochester Americans (15-8-0-0) scored three straight unanswered goals in less than 10 minutes, including a pair from rookie forward Peyton Krebs, to earn a 4-3 come-from-behind win over the Hershey Bears (12-8-2-1) in the final meeting of the season between the two teams Sunday at Giant Center.

It was the second straight night the Amerks rallied in the third period to come away with a win following last night’s 4-3 shootout victory over the Lehigh Valley Phantoms.

With tonight’s win, the Amerks have collected at least one point in six of their last 11 games against Hershey, going 5-5-1-0 dating back to the start of the 2016-17 campaign. Additionally, Rochester is 8-3-0-0 over its last 11 games dating back to Nov. 19 while they stifled the Bears’ three-game win streak to set them at a 6-5-0-0 mark over that same stretch.

In each of the of the 12 previous matchups, the winning club has posted three or more goals. After the conclusion of the 462nd all-time regular-season meeting between the American Hockey League’s two senior-most franchises, Rochester is 193-216-53 in its lifetime against Hershey, which includes a 5-2-1-0 mark in the last five years.

Rochester forward Peyton Krebs notched his first multi-goal game in the AHL with two goals on the night, including the game-winner with 2:51 remaining in regulation, while captain Michael Mesch (0+2) recorded his seventh multi-point effort of the season with two assists to take over the team’s scoring lead. Forward Ryan MacInnis (1+0) notched the first marker of the night with his fifth of the season, while defenseman Ethan Prow (1+0) scored his third tally of the season. Forwards Brendan Warren (0+2), Sean Malone (0+1) and JJ Peterka (0+1) and defenseman Oskari Laaksonen (0+1) all added assists on the night.

While appearing in his 300th pro game, goaltender Michael Houser (3-1-0) made his fifth start and sixth appearance in an Amerks sweater this season, stopping 30 of 33 shots he faced to help lift him to his third win on the year.

Hershey forwards Ryan Dmowski (1+1) and Garret Pilon (1+1) both recorded multi-point efforts with a goal and an assist each, while defenseman Ryan Nardella (1+0) tallied his third goal of the season with his second period marker. Forwards Axel Jonsson-Fjallby (0+1) and defensemen Michal Kempny (0+1) and Dylan McIlrath (0+1) all added helpers during the contest.

Netminder Ryan Bednard (0-1-0) made his first start in the AHL since May 2, 2021 when he was with the Syracuse Crunch. Bednard took the loss in his first game with Hershey, making 30 saves on 34 shots.

As the Amerks held the Bears scoreless in the first period, it was MacInnis who would get Rochester on the board just 3:20 into the contest. MacInnis converted from the left side of the crease with assists from Malone and Mersch to set the score at 1-0.

The remainder of the first frame would then go silent with Rochester registering 12 shots on goal and Hershey just six.

Just as Rochester held Hershey scoreless in the first, the Bears would return the favor to the Amerks in the second period.

With a wide-open net 3:56 into the middle stanza, Dmowski would notch his third of the season for the bears. As Houser moved to the right of the net, the left side remained wide open for Dmowski to tie knot the matchup at 1-1.

At the 15:00 mark, Nardella would help Hershey take its first lead of the contest. Sitting atop the right face-off dot, Nardella would rip a shot through traffic to give Hershey a 2-1 lead heading into the final frame.

When the third period got underway, it would take just 56 seconds for Hershey to find a two-goal cushion. Pilon would fire a wrister over the stick-side of Houser to put the Bears up 3-1.

After a tripping penalty was called on Hershey 5:30 into the final frame, the AHL’s top power-play unit would capitalize on its third and final power-play opportunity on the night.

Receiving a pass from the far point, Krebs was placed at the top of the left face-off circle, from where he’d sneak a shot through the short side of Bednard to bring the Amerks within one goal at the 7:12 mark. All but one of Krebs’ four goals this season have been scored on the man-advantage.

With 7:51 to go in the final frame, the Amerks would tie up the game at three apiece. As Prow trailed the play, the defenseman joined the rush at the last second. Setting himself up in the shooting lane, Prow received a nifty pass from Mersch and deposited a well-placed shot over the glove hand of Bednard for this third of the season.

Less than five minutes later, Krebs would find his second goal of the game to seal the deal for Rochester. As Warren was trying to gather the puck off the boards, he’d shovel a pass back to Krebs, who would take it to the net. After his initial shot was stopped, Krebs quickly gathered his own rebound and made good on the second opportunity to give Rochester the 4-3 lead with 2:51 to play.

Hershey pulled Bednard for the final minutes of regulation looking for the equalizer, but Houser and the Amerks were able to hold on to complete the season sweep over Hershey.

The Amerks return home for the first time in ten days this Wednesday, Dec. 22 as they take on the Wilkes-Barre Scranton Penguins in their final game before their official holiday break. The 7:05 p.m. faceoff will be the second and final between the two clubs this season and will be carried live on The Sports Leader 95.7FM/950 AM The Fan Rochester as well as AHLTV.