Home » Seneca County Board of Supervisors » Amerks down Comets in overtime

Amerks down Comets in overtime 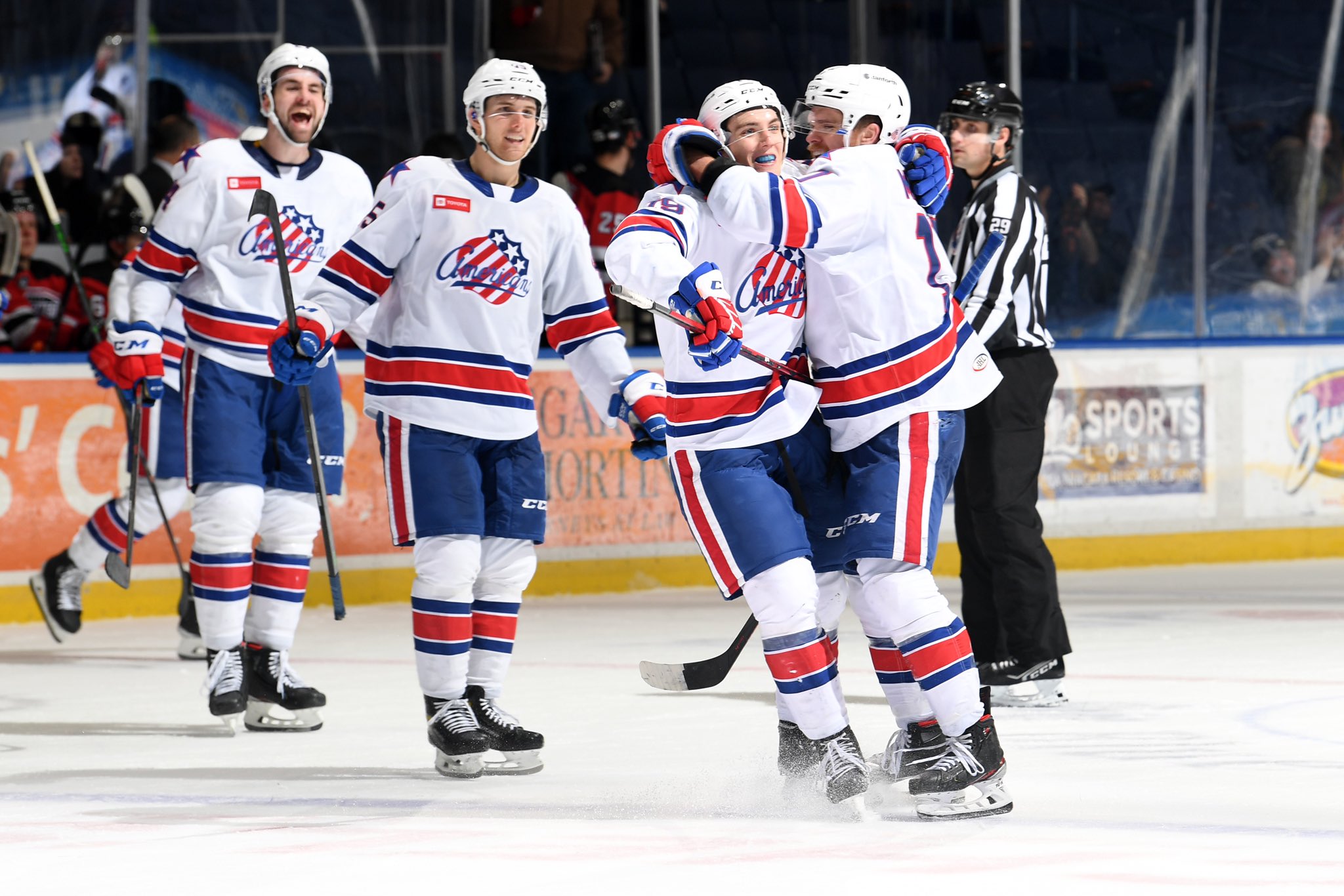 Peyton Krebs capped a three-point night by scoring the game-winning goal in the final minute of overtime to lift the Rochester Americans (12-6-0-0) to a 4-3 win over the first-place Utica Comets (16-1-2-0) Wednesday night at The Blue Cross Arena.

Sean Malone also finished with three points, including the game-tying goal, as the Amerks rallied from 2-0 and 3-2 deficits to push their win streak to four straight games. The Amerks have won four straight and five of their last six games, which includes handing Utica its only regulation loss of the season in the previous get-together between the two teams. The Comets, who prior to that opened the season with an AHL record 13 straight wins, currently have points in 18 of their first 19 games as the new primary affiliate of the New Jersey Devils.

Along with Krebs and Malone’s multi-point performances, Mattias Samuelsson also earned his second two-point outing as he netted his first goal of the season before adding an assist. Michael Mersch scored his 11th marker of the season to open the scoring early in the third period while Oskari Laaksonen, Ryan MacInnis and JJ Peterka all recorded an assist in the overtime win. Arttu Ruotsalainen made his season debut with Rochester and recorded team-high seven shots.

Goaltender Mat Robson, who was recalled from the Cincinnati Cyclones (ECHL) earlier in the week, made his Amerks debut. The netminder stopped 32 of the 35 shots he faced in his first AHL game since March 11, 2020, as a member of the Iowa Wild.

Utica, which suffered its second consecutive overtime loss, was led by defenseman Reilly Walsh as he produced a pair of assists while Chase De Leo, Fabian Zetterlund and Marian Studenic all lit the lamp.

Nico Daws (8-1-0) started in the goal and made 17 saves before being leaving the contest due to an injury midway through the third period. Akira Schmid (8-0-2) stopped seven of the nine shots he faced in just over 17 minutes of relief but took the overtime defeat.

Trailing 3-2 midway through the final frame, Rochester drew its first penalty of the night as Josh Teves was tripped in the offensive zone.

The Amerks wasted little time as Malone collected Laaksonen’s centering pass in-between the face-off dots. The West Seneca native gathered the puck before neatly backhanding it under the crossbar to even the score at three at the 11:43 mark.

As the game required overtime, Rochester again drew another penalty in the offensive zone in the final two minutes of the extra session as a result of a double minor high-sticking infraction.

On the ensuing man-advantage, Peterka had the puck atop the left face-off dot before sliding it to Malone stationed at the point. As Malone drifted to his left, he placed a perfect one-time feed to Krebs in the near circle and Krebs blasted it past the glove of Schmid to give the Amerks the 4-3 overtime victory.

By way of two power-play goals tonight, the Amerks have scored at least one marker on the man-advantage in seven straight contests, which also includes going 9-for-16 (56.3%) over the last three games.

While Rochester closed out the scoring with two unanswered tallies, the Comets began the matchup with a goal in the first and second period to build a 2-0 lead at the 8:58 mark.

Rochester responded nearly five minutes after the Comets doubled their lead to avoid the shutout as Malone handled an outlet-pass from Krebs just inside the Comets blueline. As he drew the attention of the defenders, he slid a pass towards a vacant spot of the ice, where Samuelsson rifled a slapshot to get the Amerks on the board with just over six minutes left in the second stanza.

Following the intermission break, the Amerks tied the score at two as Mersch tucked in his 11th marker of the season just 23 seconds into the final period of regulation, tying him for most on the team with Jack Quinn.

Brendan Warren carried the puck into the offensive zone before attempting to leave it for MacInnis below the left face-off circle. As the puck glanced off the skate of MacInnis, Samulesson jumped into the play and sent a cross-crease pass to Mersch, who tapped the offering into the empty net.

With his two points tonight, Samulesson has eight points (1+7) over his last nine games while Mersch has totaled 18 points (11+7) and five multi-point outings over his last 16 tilts.

After the Comets regained their lead at the 4:47 mark, Malone tied the game to send it into overtime before Krebs sealed the win with his second tally of the campaign.

The Amerks close out the week by welcoming the Laval Rocket back to Rochester on Friday, Dec. 10 for a North Division showdown at The Blue Cross Arena. The 7:05 p.m. matchup will be the third game this season between the two clubs and the first of three in the Flower City. All the action will be carried live on The Sports Leaders 95.7 FM/950 AM ESPN Rochester as well as AHLTV.