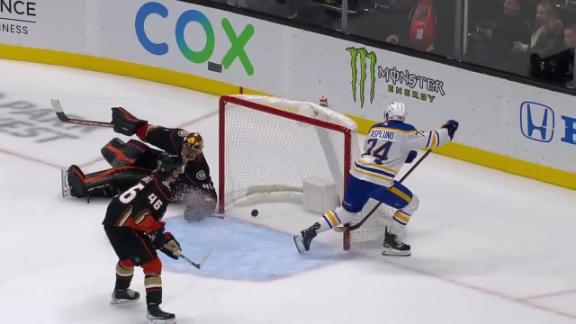 The Buffalo Sabres saw an early lead slip away, but a pair of goals from Rasmus Asplund, including the game winner with 43.2 seconds left in overtime, lifted the club to a 4-3 victory over the Anaheim Ducks at Honda Center on Thursday.

The Sabres led 3-0 in the second period and had the lead evaporate as Anaheim chipped away and controlled play. However, the Sabres persevered to win the first game of their four-game West Coast road trip and improve to 5-1-1 on the season.

Craig Anderson was sensational between the pipes for Buffalo, making 34 saves.

Zemgus Girgensons and Arttu Ruotsalainen also scored for Buffalo. Victor Olofsson recorded the primary assist on both of Asplund’s goals.

Troy Terry extended his point streak to six games (3+5) with a goal for Anaheim. Adam Henrique and
Simon Benoit also scored for the Ducks. Benoit’s goal was the first of his NHL career. Anthony Stolarz stopped 25 of 29 shots.

Buffalo’s power play finished 1-for-2, while the penalty kill was successful on the Ducks’ only chance on the man advantage.