The Waterloo Central School District has some work to do.

A report released by New York State Comptroller Tom DiNapoli’s office outlined upwards of six reserve funds, which had as much as $20.4 million in them. The reserves represent more than 50 percent of the district’s 2018-19 general fund appropriations, according to auditors.

Officials with the Comptroller’s Office said the primary objective of the audit was to determine whether the Board of Education and District adequately managed the District’s financial condition.

Auditors found that District officials did the following over the audited period:

According to the Comptroller’s Office the Waterloo Central School District should: 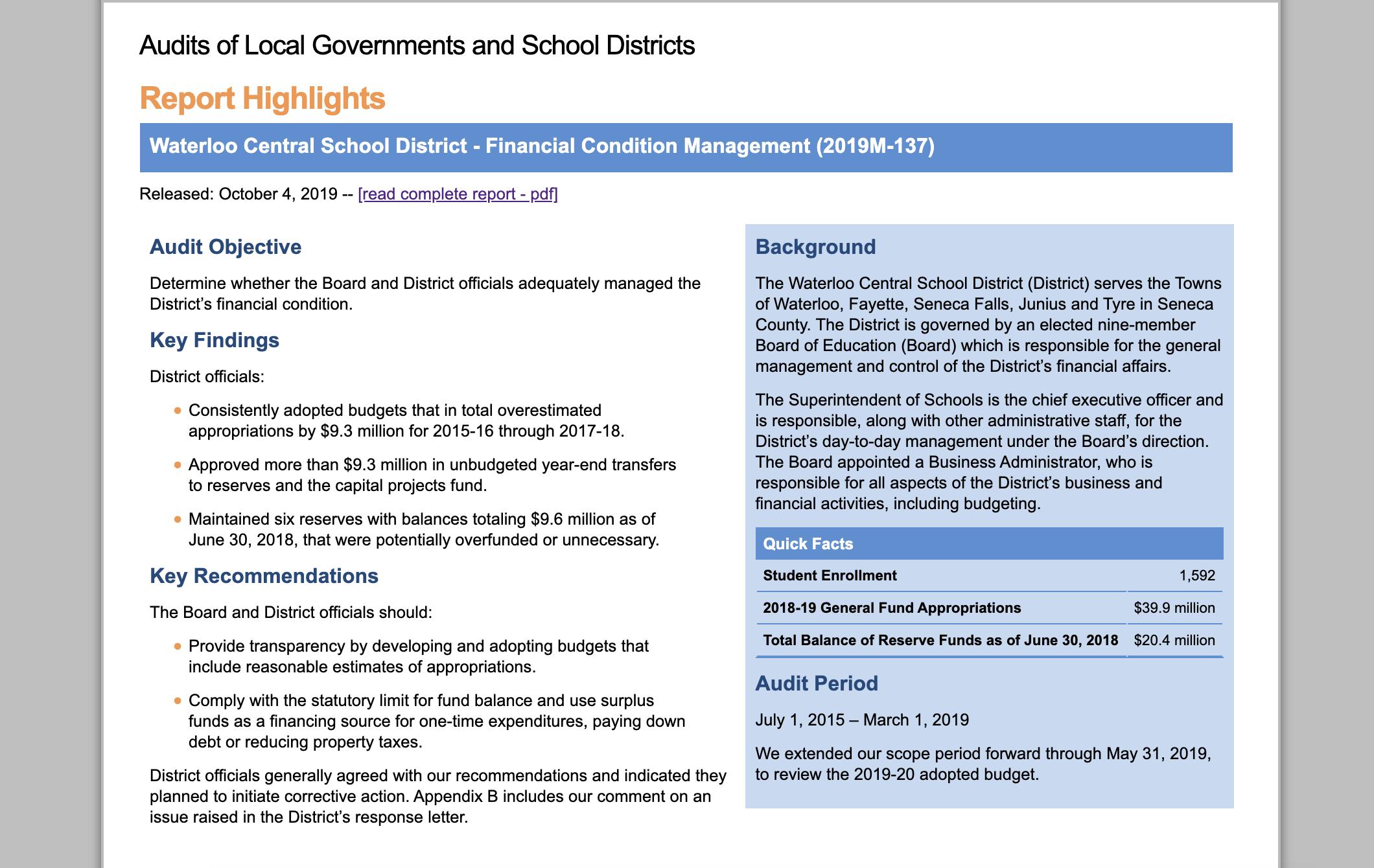 The Comptroller’s Office noted that district officials ‘generally agreed’ with the recommendations and indicated that they plan to initiate corrective action.

Auditors said that while general accounting and budgeting practices were solid historically, things changed in the last four years – during the audit period.

“The Board and District officials need to improve budgeting practices to ensure that budgets are realistic and avoid generating excessive surpluses. We compared appropriations and estimated revenues with actual operating results for 2015-16 through 2017-18. We found that overall District officials budgeted reasonably in most years for revenues; however, appropriations were overestimated by $9.3 million (8.9 percent) during this period,” the audit report explains.

As result of the operating surpluses – district officials made unbudgeted year-end transfers to reserves of $3.4 million; and one to the capital project fund of $5.9 million to keep the unrestricted fund balance under the four percent statutory limit.

Things weren’t rectified in the most-recent adopted budget, according to auditors.

“We reviewed the 2018-19 appropriations and compared them to historical trends and year-to-date operating results and found the District is continuing its historical pattern of overestimating appropriations, which will likely result in an operating surplus at the end of the current year and the additional accumulation of fund balance in excess of the District’s needs,” auditors said. “We also reviewed the approved 2019-20 budget and noted it included a tax levy decrease of 0.80 percent. However, we did note that while estimated revenues appear reasonable, District officials continued the past practice of overestimating appropriations, based upon historical trends, which is likely to result in another operating surplus.”

The Comptroller’s Office notes that overestimating appropriations and district officials’ decisions to make unbudgeted year-end transfers can result in higher-than-necessary tax levies for those living in the school district.

The Waterloo Central School District (District) serves the Towns of Waterloo, Fayette, Seneca Falls, Junius and Tyre in Seneca County. The District is governed by an elected nine-member Board of Education (Board) which is responsible for the general management and control of the District’s financial affairs.

The Superintendent of Schools, Teri Bavis, serves as chief executive officer and is responsible, along with other administrative staff for the District’s day-to-day management under the Board of Education’s direction. The district has a Board-appointed Business Administrator, who is responsible for all aspects of the District’s business and financial activities, including annual budgeting.

In a response letter to the audit Superintendent Bavis and Ellen Hughes of the Board of Education thanked auditors for their professionalism while in the district; and noted that an action plan was reviewed by the Board on September 4th. That action plan was expected to be passed at a session later in the month.

“WCSD’s Board of Education always seeks to balance its ongoing commitment to be fiscally responsible stewards of our stakeholders’ tax dollars, while simultaneously continuing to provide a strong educational program for our students,” Bavis wrote. “Concurrently, the district must abide by evolving financial constraints from state and federal laws, regulations, mandates, and requirements.”

Bavis noted that the Board of Education spends ‘many months’ developing sound budgets and fiscal practices that balance the priorities of the school district community.

Based on the Comptroller’s recommendations, Bavis says the district will do the following:

1 – Continue to provide transparent budgets that include reasonable estimates for appropriations.

2 – Continue to comply with the statutory limit of unrestricted balance funds, appropriately using surplus funds for one-time expenditures, and using reserves to pay off debt when possible.

3 – Ensure that the Board continues responsible monitoring of the district’s overall spending. The Board of Education and Board’s Finance Committee will focus this effort, according to the District’s official response.

4 – The Board of Education and the Board Finance Committee will use the debt service fund to support the debt service payments based on a written plan, spanning the next 10 years. The letter says the use of this debt service will minimize the impact to the tax cap calculation and maximize the long-term financial health of the district.

Responding to this action item – the Comptroller’s Office noted that there was no legal requirement to restrict these funds. “These funds are available for operations and should be added to unrestricted fund balance in the general fund,” the Comptroller’s response reads. “Current debt service funds should not be used to support unrelated payments on future bond issues.”

5 – The district will continue to develop, adopt, and update comprehensive, multi-year strategies to guide the budget development process. Bavis notes that the Board and District is currently int he process of developing a 10-year plan for funding capital projects and incorporating the use of the debt service fund to finance the projects. “This will provide us with the opportunity of a zero impact to the community when undertaking capital project work,” Bavis’ letter concludes.

Host of Inside the FLX and Sunday Conversation available on Spotify, Apple Podcasts, YouTube, Tune-In, and Anchor. Send story ideas, questions, and comments to josh@fingerlakes1.com.