As scattered thunderstorms came through parts of our area yesterday, it created localized wind damage and isolated brief flash flooding.

Here is some wind damage from @BroadcastBybee in Sennett.

Thanks Allison for helping us out!

Flooding on South Street in Auburn, NY on Tuesday afternoon… 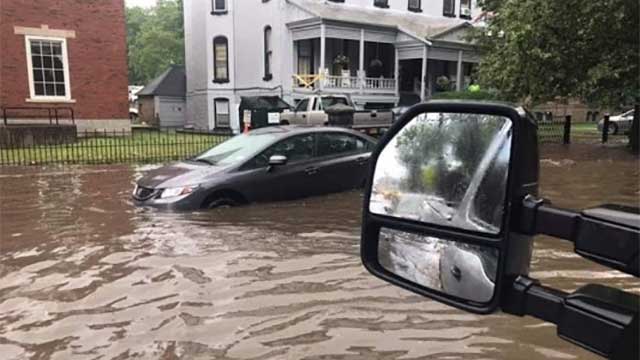 NYSEG crews working on a transformer outside Ward O’Hara Ag Museum. The storm sent a tree crashing onto the center field fence at the Little League field at Emerson Park pic.twitter.com/cz8LOrGyMz

Some rainfall reports from our @news_8 Weather Watchers. BIG difference in rainfall, as expected! Most rain fell in 15-30 minutes this afternoon. #ROC pic.twitter.com/rBELAnlEcO

A strong thunderstorm with frequent lightning, heavy rain and winds gusting past 40 mph moving across southern Onondaga and northern Cortland county over the next hour @NewsChannel9 pic.twitter.com/k3LHixRMJU

Storms with some lightning & the heaviest rain is moving into Wayne County. Walworth seeing the worst now, heading toward Newark. @news_8 pic.twitter.com/vUh6VSkkZE

For a good 45 minutes downtown Auburn was basically a lazy river ride. Some of the worst flooding I’ve ever seen here. pic.twitter.com/ylfNohAdTM

The sky is opening up north of #ROC right now! @News_8 pic.twitter.com/4dw70KMfmv

Showers and thunderstorms have begun to pop up this afternoon. If you’re headed out and about, expect to dodge some rain (heavy at times) into this evening. Highest likelihood for storms is along and south of the Thruway. #WxOnThe1s pic.twitter.com/vhj3XmPCjV