Proposed galvanizing mill in Romulus touted as environmentally benign, but many questions loom

While plans to build a $365 million garbage incinerator on a site at the former Seneca Army Depot were derailed by a state law enacted in May, a local businessman has been quietly preparing to build a 48,600-square-foot steel galvanizing mill less than one mile away.

That developer, Earl Martin, asserts that his facility would have a comparatively modest environmental footprint and produce virtually no hazardous waste.

Martin intends to dip fabricated steel — shaped for agricultural uses such as cow stalls — into molten zinc, coating it for protection against rust and corrosion.

So far, the coalition of public officials and environmental activists that mobilized to defeat what would have been the state’s largest trash incinerator is taking a wary, wait-and-see stance on the galvanizing facility.

“It is disappointing that the public still does not have specifics of the complete project and all of its impacts,” said Mary Anne Kowalski, research director of Seneca Lake Guardian, which spearheaded the anti-incinerator movement. “SLG will be seeking more information.”

Peter Gamba of the Committee to Protect the Finger Lakes said: “I can’t support it because I don’t think they addressed the risks fully. We need to understand the 15-year plan for waste (disposal).”

The hot-dip galvanizing process has been widely used nationwide for more than a century. It has a long record of yielding hazardous waste byproducts, which for decades were often shipped to deep injection wells in Texas and Ohio.

But Martin says wants to eliminate rather than bury his mill’s waste by adding highly effective recycling features recently pioneered in Italy.

“The actual hot-dipping process is done … all over,” Martin said during a public presentation in Romulus on July 11. “What is not so common in the U.S. is some of the clean equipment that we’re putting in place, the purification equipment that would enable us to completely recycle all of our material as opposed to disposing of material.”

The galvanizing mill would be build on a 75-acre site within the former Seneca Army Depot as Phase 1 of a 10-year, three-stage $20 million project that would eventually comprise 221,600 square feet of manufacturing, warehouse and office space.

The site is located at the intersection of Fayette Road and West Romulus Road (County Road 135), about one mile west of the Romulus Central School. 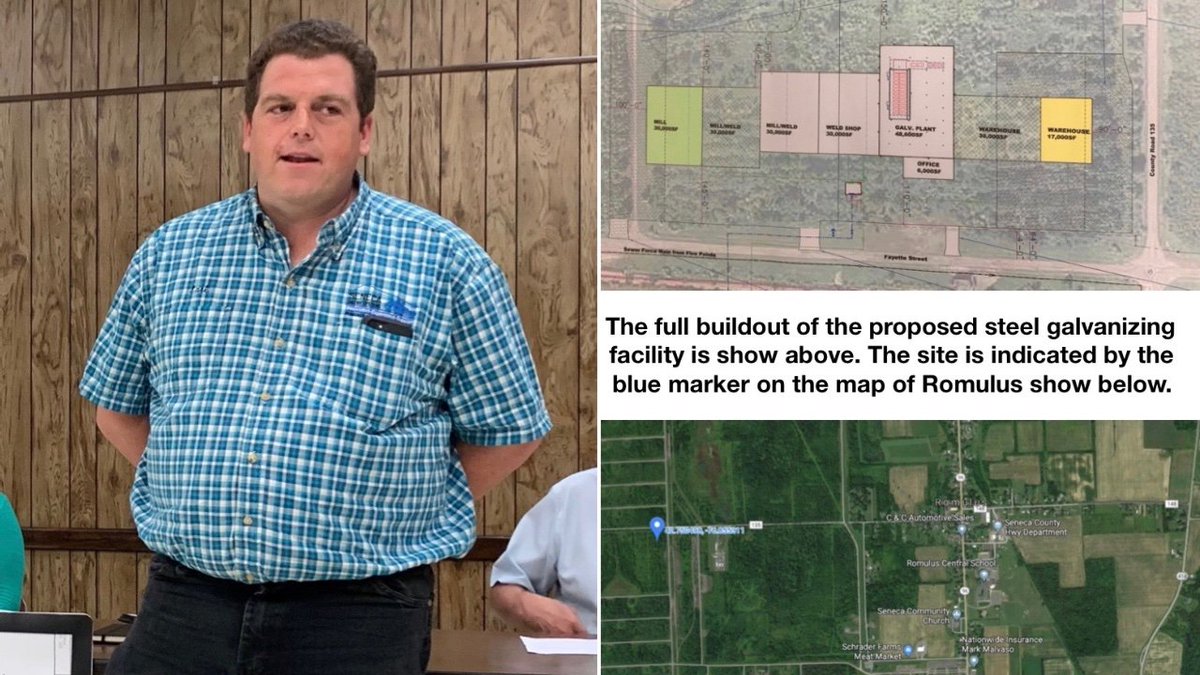 When completed, the facility would employ about 120 people, backers say.

Martin’s company, Seneca Dairy Systems LLC, is seeking a package of tax breaks for the project from the Seneca County Industrial Development Agency. In its IDA application, the company seeks sales tax exemptions valued at $1.36 million over 10-12 years and a mortgage recording tax exemption worth $90,000.

The IDA has scheduled a public hearing on the application for July 24 (6 p.m.) at the town’s Willard municipal building.

To introduce the project to the public, Martin brought a team of lawyers and consultants to the July 11 information session, which drew about 30 people.

Most of the audience seemed to accept the notion that the galvanizing mill represents a far less serious environmental threat than the incinerator, but a few expressed deep skepticism.

“I worked at a galvanizing mill for 30 years, and it’s not a very clean process,” said John S. Makai of Ovid, who worked for Bethlehem Steel in Lackawanna before the company, swamped with environmental woes, went bankrupt.

“You had to dispose of the wastewater that was put in the slag containers,” Makai added. “And now you go by that place and all you see is skull and bones and them telling you to stay out of there because it’s a restricted area of toxic waste.”

(In 1989, Bethlehem Steel produced a promotional video touting its galvanizing mill in Lackawanna. One year later, the U.S. Environmental Protection Agency reported that it found 104 hazardous waste dumps at the 2.5-square-mile site. In 2001, the company filed for bankruptcy protection.)

Martin responded that “back in those days” waste disposal practices were more relaxed, and deep well injection was cheap.

But as environmental concerns gradually mounted, injection costs soared, spurring innovation and cleaner practices, he added. For example, most mills have abandoned the use of sulphuric acid in their steel purification kettles, switching to a cleaner process that relies on hydrochloric acid instead.

Martin’s explanation was generally well received. But there were doubters.

“Big surprise that Mr. Martin’s presentation was flawless,” said Cameron Hosmer, president of Hosmer Winery in Ovid. “His team of lawyers and consultants did a superb job of presenting Side A of the story. The B side wasn’t there, which is fine, but also needs equal representation. I’m hopeful that our elected town officials will listen to all interested parties.”

Martin’s team included traffic and air quality experts, as well as two attorneys from the Phillips Lytle law firm: Kimberly Nason, a senior associate from Buffalo, and David Cook, a partner from Rochester.

She noted that the Seneca County IDA, which will award the project’s financial subsidy package, has also assumed the role of lead agency in handling compliance with the State Environmental Quality Review Act.

Nason provided a rough outline of the second and third stages of the project, noting that plans were still in flux for the exact mix of manufacturing and warehouse/office space that would be built.

Phase 2, launched four years after Phase 1, would include “at least two 30,000-square-foot mill and welding facilities and another 30,000 square feet that will be either mill and welding or warehouse, depending on needs.” Twenty-five new employees would be added.

Phase 3, started four years after Phase 2 is “operational,” would include another 77,000 square feet comprised of an unspecified mix of mill and welding, warehouse and office space. Total employment would reach 125.

Kowalski of SLG said no comprehensive environmental review of the project would be possible without more specific plans.

Martin explained that the proposed facility is the outgrowth of an expanding family business. He said he acquired his father’s Seneca Falls company, Green Mountain Welding, in 1999. It has since grown into new agricultural markets across the country and even dabbled in exports.

“In 2014-2015 we began to look for sites to expand our company,” he said. “That’s when I got to know Bob Aronson (executive director of the Seneca County IDA).

When portions of the former Seneca Army Depot property were offered in a competitive bid process, Martin acquired about about 5,800 acres of it 2016, Nason said. He reportedly paid $990,000.

Today Martin’s Seneca Iron Works in nearby Fayette reportedly employs 31 — jobs that are expected to be retained if the galvanizing mill is developed.

“Its product offerings for large scale dairy include ventilation systems and controls for regulating temperature inside barns and maintaining air quality, fans and evaporative cooling systems, stalls and beds designed for animal comfort…”

“We put a lot of emphasis on cow comfort, climate control,” he said. “Progressive dairies and animal rights — we have a package that addresses a lot of the concerns.”

In public filings, Seneca Dairy Systems has said its proposed operations would not require significant water withdrawals. No wastewater discharges are planned, and air emissions would be minimal, it said.

“The project is expected to qualify for an Air Registration Certificate subject to limited regulations, rather than a fully regulated state facility permit or a Title V (air) permit,” the company said in its formal response to a question.

Traffic has been another public concern. “Generally, the traffic generated by the delivery trucks would be spread out over the course of a day, in a manner that can easily be accommodated by the existing roadway network,” the company said.

While Martin has presented his project as environmentally benign, questions linger about modern galvanizing mills in other regions of the country.

For example,  Duke University researcher Kelsey Behrens provided an analysis of operations of a UK-controlled company with galvanizing plants in the Carolinas, Virginia, Georgia and Tennessee. In her 2012 report, “Taking Action Against Hot-Dip Galvanizing Pollution,” Behrens analyzed the waste produced and various methods of disposal.

Martin acknowledged that the vessels used for hot-dipping in Romulus may eventually need to be replaced. He said waste brokers were available to handle disposal of those used vats.

“Hydrogen chloride used in the pickling tank will be recycled through the use of an acid reclamation process,” the company said in filed documents. “Iron oxalate precipitated from acid reclamation will be landfilled. Zinc solids (dross) will be captured and removed from the zinc bath and recycled.”

For Seneca Dairy Systems, the issues of waste disposal and the lack of definitive plans for Phases 2 and 3 may emerge as factors that drive public reaction to the project.

But Martin has at least addressed the question of project ownership more directly than the developers who proposed the garbage incinerator.

According his IDA application, he will own an 80 percent stake and serve as managing member of the manufacturing facility partnership. Lee Zimmerman will hold the remaining 20 percent stake.

In contrast, the developers of the planned Romulus incinerator remained in the shadows, operating through a recently-formed limited liability company and an attorney who acted as their spokesman. Throughout the LLC’s two-year push to obtain operating and zoning permits, the attorney declined to provide full details of the partners’ stakes. State law allows them to remain hidden.

That incinerator LLC became involved in a zoning controversy in Romulus, developed an adversarial relationship with local officials and eventually sued them.

Those same Romulus officials — members of the Town Board and its Planning Board — will have to rule on Martin’s requests for zoning changes and a special use permit for the galvanizing mill.

Several of those Romulus officials were part of the coalition of winery and real estate interests and environmental activists who pushed the state Legislature to ban garbage incinerators in the Finger Lakes.

After the bill easily passed in both legislative chambers earlier this year, Gov. Andrew Cuomo signed it into law May 24. In a statement at the signing, he said it was “crucial” that the state protect the natural resources in the Finger Lakes.