The Geneva Area Chamber of Commerce reported its highest event attendance at its 2019 Annual Dinner Banquet on Thursday, Jan. 24. 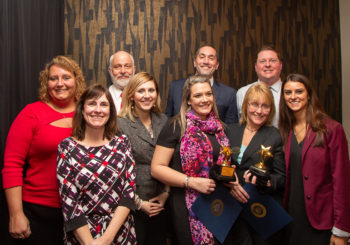 Held at Club 86 in Geneva, the event was attended by nearly 300 people, including Chamber members, local representatives and community partners. Guests enjoyed a buffet dinner of Club 86 favorites and the ShopLocal Silent Auction and LoveLocal Live Auction, the latter of which was led by professional auctioneer Carrie Hessney Doran, of Hessney Auction Co.

Those in attendance were also able to learn about Zotos International Inc., a subsidiary of Henkel Corporation. A manufacturer of hair care, hair color and hair texture products, Zotos has been named Business of the Year twice and was this year’s event sponsor.

The Chamber also awarded four honors at the annual event. The “Business of the Year” award was presented to CCN International, honoring its business growth and dedication to the region. The award was presented by State Assembly Minority Leader Brian Kolb and was accepted by CCN president, Richard Conoyer and principal, Anne Nenneau.

Two “Chamber Champion” awards were also given out to honor committee members that have gone above and beyond to show their support and involvement toward not only understanding, but participating in, Chamber programs and events.

The two individuals that received this honor were Karen Dean and Alexa Wessie, from Reliant Community Credit Union. The Chamber Champion awards were presented by GACoC board members Charlie Bartishevich, of Finger Lakes Partners Insurance, and Josh Miller, from Lyons National Bank. Both businesses are annual partners with the Chamber, supporting events throughout the year.

“The Geneva Area Chamber of Commerce has continued to grow, and that growth was evident at our 2019 Annual Dinner Banquet,” said Miranda Odell, Geneva Area Chamber of Commerce President. “We are extremely grateful for the generous support of our sponsors, members, partners and volunteers who came together to make the 2019 Annual Dinner the most successful dinner that the Chamber has hosted yet.”