New York Attorney General Letitia James today took action to prevent human trafficking and protect New Yorkers as summer travel and cross-border movement increases. Attorney General James provided hotel and tourism associations with cards that contain human trafficking information and hotline numbers and reminded the lodging facilities of their obligation to post the cards in visible locations to help victims. Traffickers rely on the hospitality industry for moving, controlling, and delivering victims of commercial sex or forced labor. In a letter to hotel and tourism associations, Attorney General James urges them to do their part to report, respond to, and prevent human trafficking.

“Human trafficking is unconscionable and hurts communities in New York and across the country,” said Attorney General James. “Today my office is reminding hotels, motels, and lodging facilities across the state of their obligation to prevent and report human trafficking. As summer travel increases and more people move around the state, it’s critical for hotels to do their part to stop human trafficking and support victims. Posting the national human trafficking hotline number and other critical information in visible locations can help save lives.”

Attorney General James sent her letter to 10 statewide hotel and tourism associations that have hundreds of members, including some of the biggest chains. New York law requires hotels and lodging facilities to post informational cards that contain only information concerning services for human trafficking victims and that prominently include the national human trafficking hotline telephone number. Informational cards must be made available in plain view in a conspicuous place and manner in the public restrooms, individual guest rooms, and near the public entrance or in another conspicuous location in clear view of the public and lodging employees where similar information is customarily displayed.

The below information cards were sent to the hotel and tourism associations. 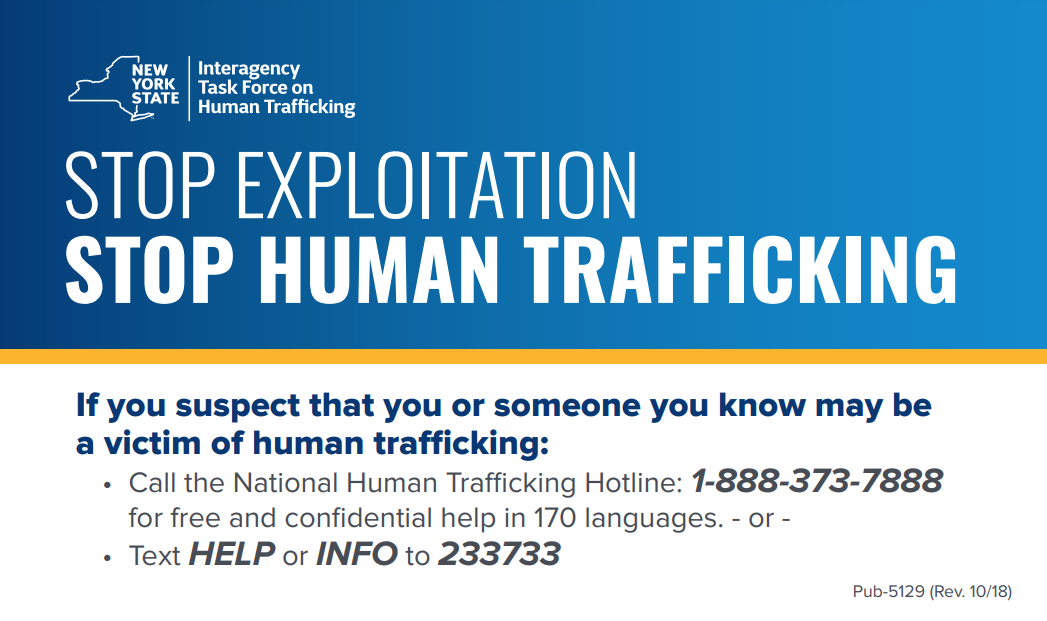 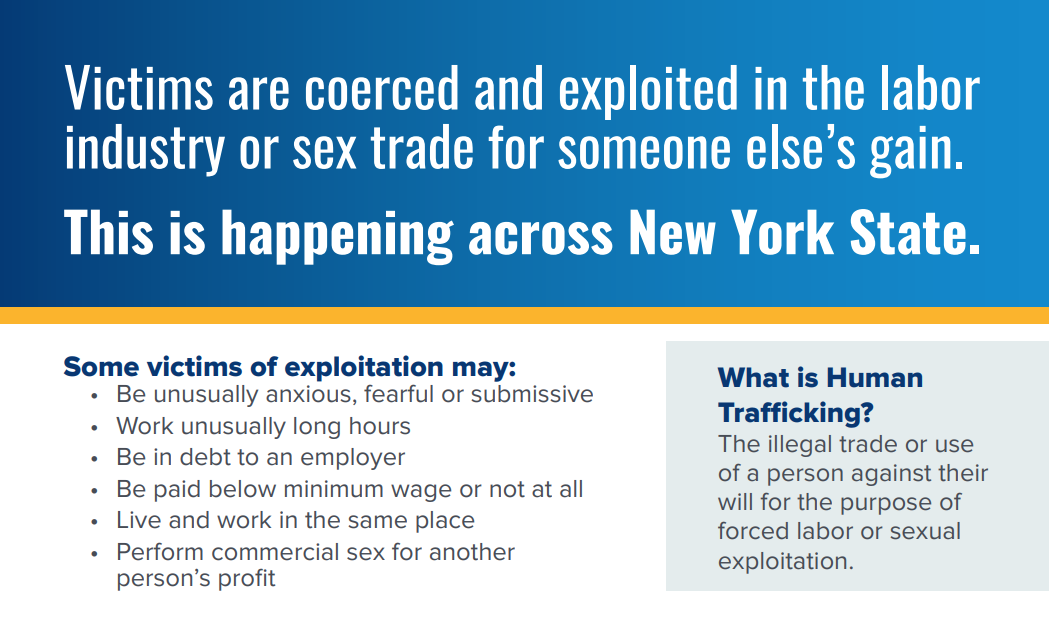 Some victims of exploitation may be unusually anxious, fearful, submissive, work unusually long hours, indebted to an employer, paid below minimum wage or not at all, live and work in the same place, or perform commercial sex for another person’s profit.

According to the most recent Federal Human Trafficking Report released last month, 57 percent of all human trafficking victims in 2021 were minors and 92 percent were sex trafficking cases. Additionally, the number of forced labor cases increased by 22 percent. New York remains among the top five states with the highest number of new sex trafficking cases, active sex trafficking cases, and cases involving minors. The study shows that victims were primarily recruited by fraudulent job offers and promises of visas and shelter. Most of the tactics mentioned in the report require passing through lodging facilities.

“Human trafficking is a horrific form of slavery that affects thousands of people across this country and hundreds in New York. Partnerships at the federal and state level, as well as with the private sector, are imperative for helping identify potential victims and holding traffickers accountable for their crimes,” said U.S. Senator Kirsten Gillibrand. “I am proud to lead bipartisan legislation, such as the Trafficking Survivors Relief Act and the Put Trafficking Victims First Act, that would provide New York state and law enforcement with tools to help victims break free and be free in life after trafficking. I want to thank Attorney General Letitia James for her continued efforts to create these collaborative efforts as we combat human trafficking from all angles and work to end this scourge of modern-day slavery.”

“Trafficking networks use hotels as prime locations to bring their victims,” said Assemblymember Amy Paulin. “Informational cards with hotline numbers can help victims access the help they need to escape their captors. I applaud the attorney general for bringing attention to this crisis as we enter the summer travel season.”

“We commend Attorney General James for taking this important step to educate New Yorkers about human trafficking and mandating its hotel industry to take this crime and human rights violation seriously,” said Taina Bien Aime, executive director, Coalition Against Trafficking in Women (CATW). “When 92 percent of detected trafficking cases involve the commercial sexual exploitation of women and girls, it’s essential that New York’s lodging facilities — sites where the abuse often occurs — take measures that can lead a victim of trafficking to safety and resources.”

“For survivors of human trafficking, access to reliable information can be a lifeline, particularly for those experiencing extreme isolation,” said Hon. Judy Harris Kluger, executive director, Sanctuary for Families. “Too often, traffickers are the single source of information and connection to the outside world — a deliberate effort that enhances their power and control over those they exploit. By reminding lodging facilities of their obligation to display placards with safety information and helpline numbers, Attorney General James is helping break down an invisible barrier that keeps trafficking victims tied to their exploiters. We applaud the attorney general for her actions and commitment to ending human trafficking in New York state.”

“When I was trafficked and brought to a hotel, there was no information that could help me and I wish there was,” said Shandra Woworuntu, founder, Mentar, and a trafficking survivor. “It is very important for hotels and businesses to step up and prevent human trafficking from happening in their spaces. The human trafficking identification information and the hotline number will give hope to the victims who read it. I thank Attorney General James for leading on this issue.”

“As an organization committed to the safety, wellbeing, and overall welfare of Black girls, we stand in support of Attorney General James’ call to action to protect New Yorkers from Human Trafficking,” said Toni Wilson, director of culture & narrative shift, Girls for Gender Equity. “We know that 60 percent of Black girls will experience sexual violence by the age of 18, and according to a recent sex trafficking study by National Black Women’s Justice Institute, 40 percent of trafficking victims are Black women and girls; the highest percentage of any race. Attorney General James taking action to protect New Yorkers from human trafficking is a direct action that will protect Black girls. Girls for Gender Equity thanks her for her diligent service, commitment to the young people of this city, and her efforts to prevent harm.”