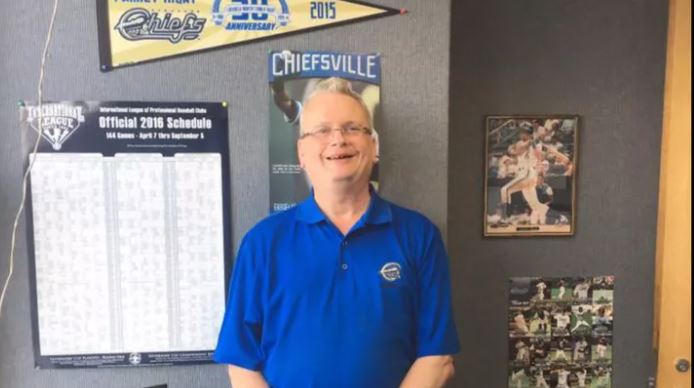 Chances are that if you have worked in sports media covering the Syracuse Crunch or the Syracuse Chiefs, now the Mets, you ran into Donald Johnston. Donnie Baseball, as he was referred to by reporters and those who worked with him, died Monday, January 3, 2022, after a long illness.

Donnie ran the press box at NBT Bank Stadium for decades. In the offseason, you would find him running the media eating area with the Syracuse Crunch. There was always a smile, a handshake, and a question…

“Do you need anything?”

That is how Donnie lived his life—helping others. When not working for the professional teams in Syracuse, you would often see Donnie at his alma mater of Paul V. Moore High School on Friday nights, keeping stats for the Central Square Red Hawks. The next day, he would travel to Altmar-Parish-Williamstown to keep stats for their games. Around those parts, he was lovingly referred to as “Donnie Stats.”

“We are all just shocked and saddened to hear about the loss of “Syracuse’s Donnie Baseball”.  “Donnie Stats” as he was known around CNY was not only a fixture here at the Chiefs/Mets,  but he was also our friend.  Donnie was adored by scouts, home and visiting managers, umpires as well as all the media that came to the stadium over the years.  Donnie was part of our family and he will be fondly remembered here at Historic NBT Bank Stadium.  People often wonder what makes NBT Bank Stadium “Historic” and the answer is people like Donnie Johnston.”

“I hope Donnie knew how much joy he brought to people. He was truly one of a kind. It never got old hearing Donnie pull out of thin air the exact number of days or hours or minutes or seconds to your birthday, or to the All-Star break, or to Opening Day the following year. Beyond any of the numbers, he was a truly sweet and empathetic man. He put a smile on the faces of broadcasters with the most basic of gestures, whether it was a welcome note or a cup of water, helping to break up the mundanity that can make up a minor-league baseball season. Sometimes I’d just walk out into the press box and sit and talk with Donnie about anything – baseball, politics or his love of his daughters. He had a way of making a connection with every person he met. Donnie was a special person.”

“I have never been more hydrated than the summers we worked together. Literally, he’d ask you seven times a game if I needed water. I couldn’t say no to the guy. He was so caring. He was so giving. I laugh every time I think about him because he was such a kind-hearted soul and it all flowed from wanting to do the right thing. I just think at the core, he was a really generous soul. I kind of feel like he kept going because he thought that’s why he was on the earth, to serve the team and serve the game.”

“I had the pleasure of working with Donnie for over 25 years and was always impressed with his positivity and love for Central New York sports. His determination to better himself despite the challenges thrown his way is something that has always inspired me. His mind for numbers was amazing and each goodbye was never just a see you next game it was always along the lines of I’ll see you in 3,254 minutes. The measure of his impact is reflected in the multiple long-term relationships he formed with staff members and CNY media.”