Home » Chance The Rapper » Amerks bounce back with win over Hartford

Amerks bounce back with win over Hartford 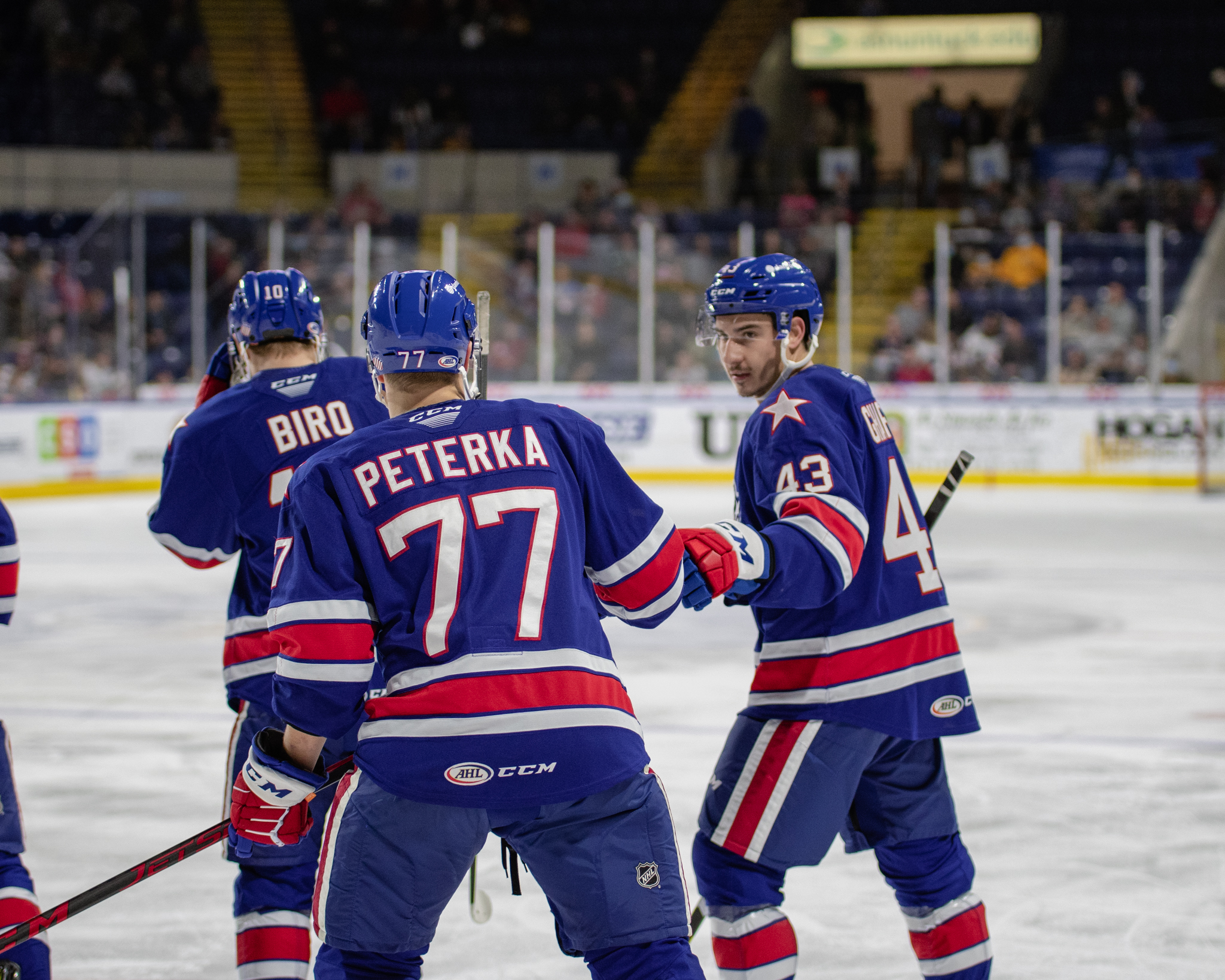 With the help of four different multi-point efforts, including a season-high three-point outing from Arttu Ruotsalainen, the Rochester Americans (17-9-0-0) erased a pair one-goal deficits before holding off a late push by the Hartford Wolf Pack (14-8-2-2) for a 4-3 victory Sunday evening at XL Center.

With the win, the Amerks have won 11 of the last 18 meetings with the Wolf Pack, including each of the last three get-togethers dating back to the 2019-20 campaign. In six of the last seven meetings between the two clubs, the visiting team has come away with the victory. Rochester has earned wins in four of the last six contests against Hartford while also recording at least one point in eight of the previous 10 tilts, going (6-2-0-2) over that span.

Along with Ruotsalainen’s season-high three points, Mason Jobst (0+2), JJ Peterka (1+1), who produced three points in Saturday’s contest against Springfield, and Ryan Scarfo (1+1) all chipped in a pair of points. Scarfo’s two-point performance is the second of his AHL career and first since Feb. 24, 2019, as member of the Wilkes-Barre/Scranton Penguins. Brandon Biro scored his fourth of the campaign. Since Nov. 27, he has logged 10 points (4+6) over his last 10 games. Wyatt Ege earned his first point as he was awarded the secondary helper on Ruotsalainen’s game-deciding goal midway through the third period.

Goaltender Michael Houser made his third straight start and second in the last two games. With a season-high 36 saves, the veteran netminder improved to 5-2-0 on the season.

Forwards Mike O’Leary (2+0) and Lauri Pajuniemi (1+0) both found the back of the net in the defeat for Hartford. Rookie netminder Adam Huska (2-5-2) stopped 22 of the 26 shots he faced but took the loss in the crease. In his last five appearances, Huska has gone winless (0-3-2) dating back to Nov. 19.

Early in the opening period of play, Michael Mersch sent a cross-crease feed to Ryan MacInnis along the backdoor. With a yawning net, MacInnis was unable to find light the lamp as his shot glanced off the goal post to keep the game scoreless. In an unfortunate series of events, however, Hartford went down the ice, and with a loose puck in front of Houser, Pajuniemi sent a backhanded shot past the right arm of the Rochester netminder to open the scoring at the 5:15 into the matchup.

Just over six minutes later, the Amerks forced a turnover inside their own zone before Jobst sent an outlet pass to Ruotsalainen along the benches in the neutral zone. Jobst continued skating through the center of the ice before gathering a return pass and tucked a shot onto Huska. The goaltender made the initial save, but Scarfo spotted the rebound and pushed the puck across the goal-line for his second of the slate to even the score at one.

After the intermission break, Hartford regained its one-goal lead as O’Leary netted his first of the season at the 3:33 mark of the middle frame from Austin Rueschhoff and Zach Giuttari.

The Amerks, however, responded with a pair of goals to take a 3-2 advantage into the final period of regulation.

On Rochester’s second goal of the afternoon, Ruotsalainen had the puck just inside the Wolf Pack zone and flung a seemingly innocent towards Huska. The netminder was unable to handle the rebound and Peterka scooped it up before tying the contest with 9:32 left in the frame.

Four minutes later, Biro poked the puck off a Hartford skater inside the Rochester zone to spring he and Peterka on a 2-on-1, odd-man rush. Peterka, much like he did in setting up Linus Weissbach’s tally in the first period Saturday against Springfield, skated down the left wing before centering a perfect pass to Biro. The Penn State University product steered the puck behind Huska, giving the Amerks their first lead of the contest and extending his point streak to three straight games.

Midway through the third stanza, Hartford was generating many offensive chances, but Ege banked the puck out of the Amerks zone to Jobst racing through the center of the ice. As Jobst initiated a give-and-go to enter the Hartford blueline, he carried the puck and wrapped around the goal crease. Despite the initial attempt being denied, Ruotsalainen snuck in the backdoor and fired it over the blocker of Huska to double the Rochester lead with 10:20 left in regulation.

The Wolf Pack, trailing 4-2, pulled within one when Tarmo Reunanen shot the puck atop the point with just over three minutes on the clock. Prior the puck reaching Houser, O’Leary flagged it into the net to make it a one-goal game.

Hartford pulled Huska for the final two minutes of play, and despite recording the game’s last five shots, Houser and company held on for the 4-3 victory to split the New England trek and grab their first win of the New Year.

The Amerks embark on a busy stretch of three games in four nights on Wednesday, Jan. 5 when they host the Syracuse Crunch in an intrastate showdown at The Blue Cross Arena. Game time is slated for a 7:05 p.m. start.