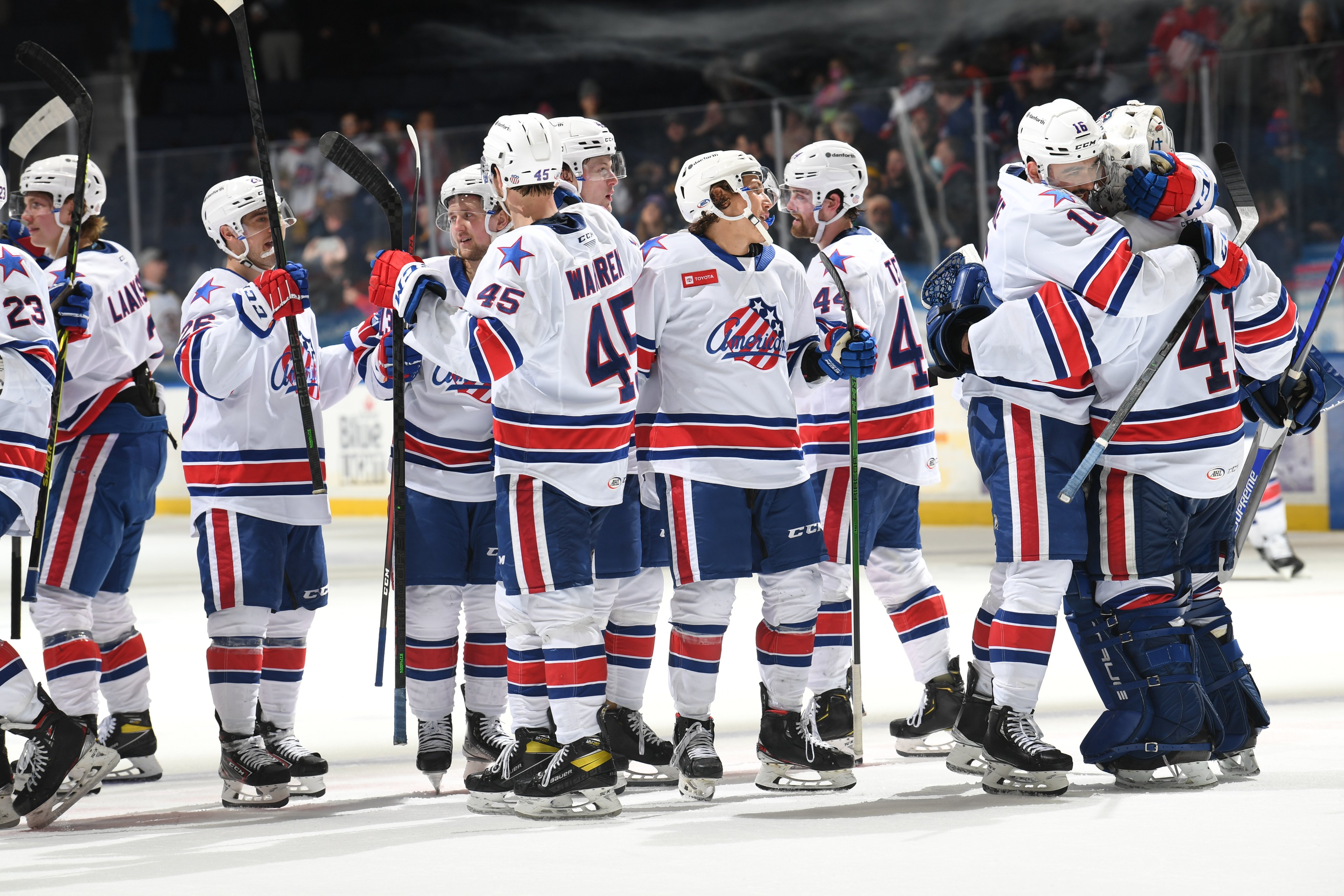 Following a 10-day layoff, the Rochester Americans (16-8-0-0) defeated the Providence Bruins (11-8-3-1) 5-3 on the strength of a season-high four-point effort (2+2) from veteran forward Michael Mersch Wednesday night at The Blue Cross Arena.

The win improves the Amerks to 8-2-0-0 in their last 10 games while also helping the club push its home win streak to five straight games in Rochester, the longest since the 2015-16 campaign. Additionally, the victory gives the Amerks a 3-8-2-0 record in the previous 13 meetings against Providence dating back to the 2007-08 slate.

Along with Mersch’s multi-point outing, Brandon Biro (1+1) and Ryan MacInnis (0+2) both produced a pair of points in Rochester’s first home game versus Providence since Oct. 30, 2019. Oskari Laakkonen and Ara Nazarian, who netted his first AHL goal in his Amerks debut, rounded out the scoring. Along with Nazarian, David Drake, Matthew Cairns and Jacob Pritchard all appeared in their first AHL contest.

Goaltender Michael Houser appeared in his seventh game of the season for Rochester, and after making 28 saves, he improved to 4-1-0.

Forwards Samuel Asselin, Chris Wagner and Oskar Steen all scored for Providence, which played its first game since Dec. 17. Netminder Kyle Keyser (4-6-1) drew the starting nod for the Bruins but was pulled late in the second period for Troy Grosenick (4-1-1). In 25 minutes of relief, Grosenick made four saves.

Neither team generated much offensively in the first six minutes of play before Rochester opened the scoring in the first period thanks to a redirection by Mersch at the 6:20 mark.

With the puck in the left corner, MacInnis sent a pass atop the left point to Drake, who was just inside the blueline. The defenseman fired a shot that was headed wide of the net, but just as he was coming across the goal crease, the Amerks team captain steered the puck past Keyser to break the scoreless game for his first of two on the night.

The primary assist from Drake was his first AHL point since April 13, 2018, as a member of the Lehigh Valley Phantoms.

Following the intermission break, Providence evened the score at one as Asselin netted his second of the slate moments after Rochester successfully killed off its third penalty of the contest.

The Amerks, though, drew their first power-play of the night with 15:23 left in the middle frame and just 21 seconds into the infraction, Laaksonen wired in a shot from the top of the zone to regain the lead.

After Laaksonen’s second tally of the campaign, Rochester pushed its cushion to 4-1 as Biro and Nazarian both scored 1:19 apart before the end of the frame.

On Biro’s powerplay-goal, Mersch tipped a Laaksonen outlet pass across the neutral zone to spring MacInnis and Biro on an odd-man rush towards Keyser. Biro received the puck after MacInnis awaited a diving Bruin before centering a feed to the second-year pro.

By earning his second helper of the night, MacInnis has five points (1+4) over his last three contests and 10 (3+7) over the last 10 outings dating back to Nov. 24.

With a pair of tallies on the man-advantage, Rochester’s sixth game of the campaign with two or more power-play goals, the club has scored a league-leading 24 goals on the power-play. Equally as impressive, the Amerks have gone 17-for-49 (34.7%) over their last 13 games dating back to Nov. 17.

To finish off the scoring in the period, Cairns dumped the puck around the boards before taking a hit along the boards near the red line. As the puck made its way into the trapezoid, it caromed off the netminder’s stick and directly to Scarfo. The forward pushed a pass to Nazarian, who finished off the play by tucking the puck inside the right post of Keyser at the 13:27 mark.

Providence, trailing 4-1 to begin the final period of regulation, netted a pair midway through the third frame to make it a one-goal game as Steen and Wagner both scored their ninth and fifth goals of the season, respectively.

The Bruins continued to look for the equalizer over the final 10 minutes, and after serving a roughing penalty in the late in frame, Mersch sealed the 5-3 victory as he plotted an empty netter.

The Amerks usher in the New Year on the road as they embark on a two-game swing through New England, beginning with a 2:00 p.m. matchup against the Springfield Thunderbirds on Jan. 1, 2022. Following the contest from the MassMutual Center, the Amerks close out the weekend with a 3:00 p.m. matinee at the XL Center against the Hartford Wolf Pack on Sunday, Jan. 2, 2022.