Home » Valentine's Day » Can student loan debt be canceled? Borrowers say debt will be carried for life if not forgiven

Can student loan debt be canceled? Borrowers say debt will be carried for life if not forgiven

Is it time to cancel student loan debt once and for all?

Student loans are a huge financial strain in the U.S. Not only for individual borrowers, but the economy overall. According to Investopia, there is $1.57 trillion in outstanding student loan debt in the U.S. with the average student loan borrower having $38,792.

Progressives have argued that canceling student loan debt will mean an unshackling of low-wage workers in the U.S. economy. Conservatives have said the opposite is true — and that canceling that much debt would cripple the economy.

RELATED: Navient gives up on student loans, will pass debt off to another company

FingerLakes1.com recently spoke with a 2014 graduate of Nazareth College, who paid approximately $30,000 per year until graduation. She didn’t want to be fully-identified, but was comfortable with her first name being shared.

“There’s so much stigma around debt in general,” Maria told FingerLakes1.com. “Student loan debt feels even more predatory now given how it’s been politicized.” She has family members who have scorned her present day for taking on so much debt to get a degree, but recalls those same people being the ones who reminded her repeatedly through the first 18 years of her life that college was ‘a necessity’.

“That’s the frustrating part,” Maria said of family and friends who have turned the politicization of student loan forgiveness into a football. “I graduated with a marketing degree, found a job that pays fairly well, but given that rent is twice as expensive as when I graduated from college paying it down has been impossible.”

Are student loans going to be canceled?

The short-term answer is ‘no’. But that could be changing. Progressive Democrats have called for sweeping, widespread measures to cancel student loans. But, canceling student debt isn’t even appropriate to many Democrats. The moderate branch of the party has argued feverishly against it. 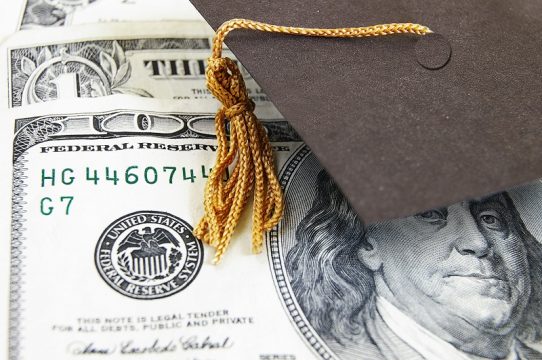 Student loan debt in the U.S. grows by the day.

Can student loans be forgiven if not canceled?

Yes. President Biden has already canceled $11.5 billion of student loans this year. The Education Department has also revamped student loan forgiveness programs so that more people in the public sector can qualify for it. Income-driven repayment plans are also expected to be expanded significantly.

But that’s where borrowers and recent graduates like Maria say the government needs to do more. “An income-driven repayment plan for student loans only works if you’re limiting the amount of interest that a bank can collect or attach to it,” she said. “I understand why people get so excited about that solution, because it doesn’t require as much work from the institutions — but at the end of the day — income-driven repayment plans have limitations.”

The numbers show she’s right. For example, if a person is not consistently on an upward trajectory with income — then an income-driven repayment plan could mean retaining a loan for years, or even decades before its paid off. It also assumes the person stays committed to that field — even if it’s not financially viable.

It also significantly extends the life of the loan, which supporters of student loan cancelation say is central to helping the economy. If graduates are saddled with a huge loan after graduating — and it takes a decade or more to pay it off — when will they make other major purchases?

Buying a house could be delayed, moving for a better job could be put off, and starting a family is inevitably paused.

RELATED: Here are 17 ideas for how to fix student loans and forgiveness

Does President Biden have the authority to cancel student loans?

President Joe Biden can cancel student debt. It happened earlier this year. However, the political capital it takes to cancel a vast amount of debt typically outweighs the perceived benefit. After all, a move by Democrats, or President Biden would be used as leverage in future elections.

However, this could be precisely why the White House takes action over the next several months. Democrats need a rallying point for the 2022 midterm elections. When he ran for office — canceling student loans was a proposal. Now arriving at the start of his second year in office — Biden needs a victory.

Canceling a large portion of student loans could be something to propel Democrats to victory in 2022 or 2024.

As for Maria, who has paid off approximately 25% of her student loans so far, the politics of student loan cancelation is irrelevant. “This is a real life problem for a lot of people. Not just those in their 20s, but now for people in their 30s and 40s too,” she continued. “Something has to be done. If not now, we’re going to have people carrying student loan debt until they retire or die because the promise of good paying jobs after graduation wasn’t really true.”