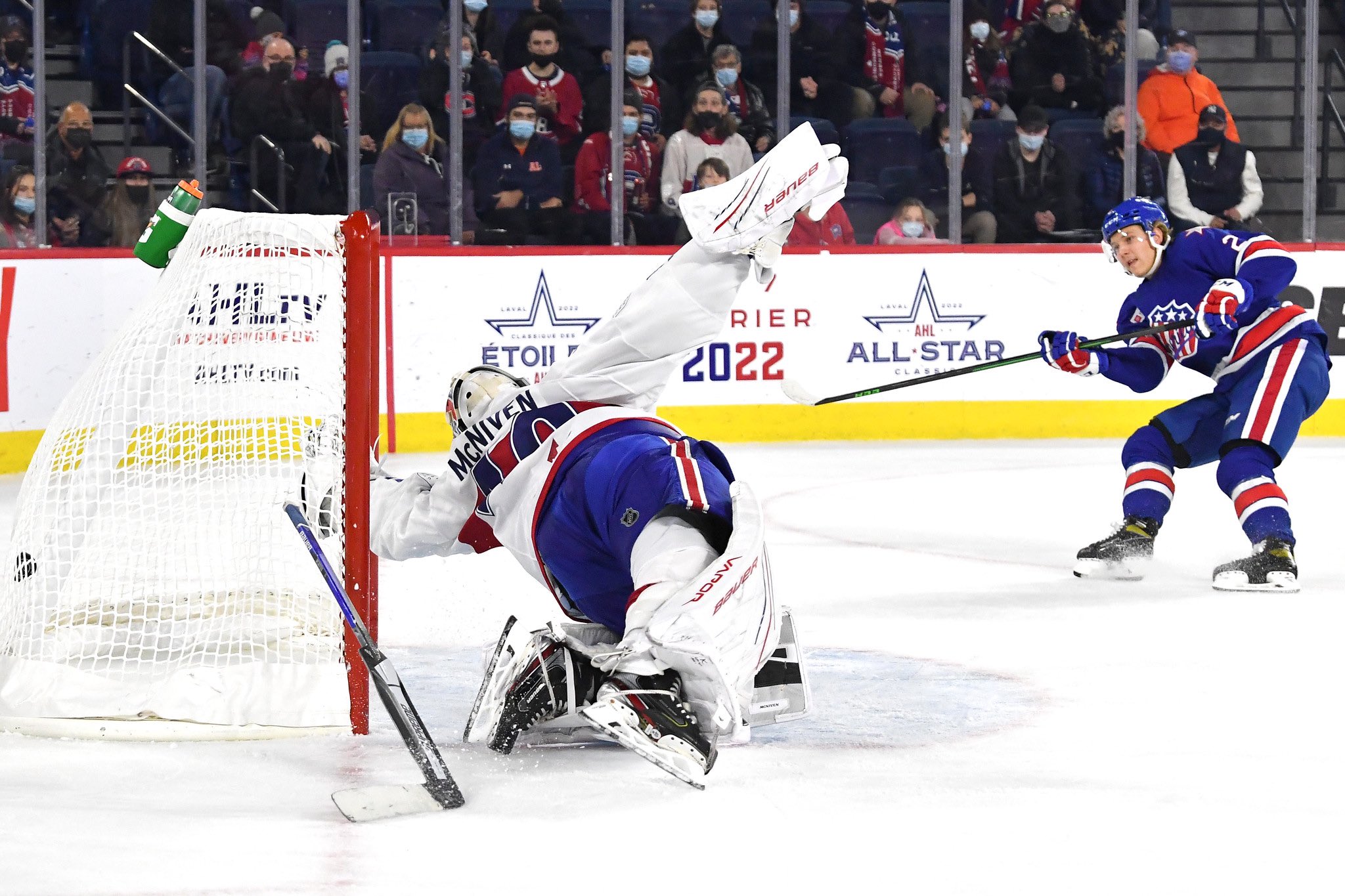 A wild back-and-forth affair that saw a combined six goals in the third period ended with Oskari Laaksonen delivering the game-winner with 1:13 remaining in overtime to cap a thrilling 6-5 win for the Rochester Americans (4-2-0-0) over the Laval Rocket (4-3-1-0) Saturday afternoon at Place Bell. With the win, the Amerks completed the two-game sweep over the Rocket and closed out their four-game road swing with six out of a possible eight points to move up the AHL’s North Division standings.

The win, Rochester’s second in as many nights versus Laval, improves the Amerks to 15-3-0-0 all-time against the Rocket, including 9-1-0-0 north of the border. The Amerks have also won 11 of the last 12 meetings dating back to the 2017-18 campaign and have scored three or more goals in 14 of the 18 contests, which includes nine of the 10 get-togethers in Laval.

Amerks captain Michael Mersch pushed his goal-scoring streak to four straight games and also added two assists while Jack Quinn notched his fourth straight multi-point effort with a goal and an assist to become the first AHL player to reach the 10-point mark this season. The rookie forward finished the month of October with 10 points (5+5) and currently leads the league in scoring through just six games.

JJ Peterka also finished with two assists, including the primary helper on Laaksonen’s overtime game-winner, and Ryan MacInnis also posted two assists in the win, his first multi-point game Feb. 26, 2020 as a member of Cleveland Monsters. Linus Weissbach scored his third marker of the campaign and Matej Pekar and Jimmy Schuldt both picked up their first goals of the season, respectively.

Goaltender Ukko-Pekka Luukkonen (2-2-0) evened his record on the season as he made 33 saves while making his fourth appearance of year.

Former Amerk Jean-Sebastien Dea (1+1), Ryan Poehling (1+1), Terrance Amorosa (0+2), Alex Belzile (0+2), and Jesse Ylönen (2+0) all produced a pair of points for Laval, who suffered its second straight home defeat after starting the season with a 3-0-0-0 mark on home ice. Michael Pezzetta completed the scoring on the afternoon as he tallied his third of the slate. Goaltender Michael McNiven (1-1-1) made his third appearance of the season and he finished with 20 saves in the overtime loss.

After seeing the Rocket score a pair of goals 50 seconds apart from Ylönen and Dea late in regulation to force overtime, the Amerks started the extra session with three grade-A shots but were denied by McNiven.

Peterka was one of the three skaters along with Quinn and Mason Jobst who were stopped, but as the extra frame reached the final 90 seconds, the rookie forward skated with the puck down the left side of the ice, drawing the attention of the Rocket defenders. As Peterka reached the left side of the crease, he hit Laaksonen in-between the face-off circles and the Finnish defenseman wired the puck into the net past a diving McNiven to give the Amerks a 6-5 victory.

After the Amerks carried the 1-0 goal lead thanks to Quinn’s fifth of the season, Laval flipped the deficit into a one-goal advantage of its own as they scored a pair of tallies 2:20 apart near the midway point of the second period.

On the first Rocket marker, Xavier Ouellet sent a cross-ice backdoor pass to Poehling. The former first rounder displayed patience as he faked a shot to Luukkonen’s right before dishing in a backhanded feed past the left arm of the Finnish netminder.

Just two minutes later, Laval kept the Amerks inside their own zone before Ylönen gathered the puck at the left circle and weaved his way in-between the face-off dots. While being surrounded by Rochester skaters, the second-year forward tucked a shot under the crossbar at the 10:34 mark to give Laval its first lead of the contest.

The Amerks, despite being held to one shot in the first 11 minutes of the second period, forced Laval into an icing and capitalized on the ensuing face-off when Mersch scooped up a loose puck below the goal-line and stepped in front of the crease. As the four-time 20 goal scorer turned towards the net, he slipped the puck between the pads of McNiven to even the game at two.

Mersch’s fifth goal of the season from Quinn and MacInnis gives him nine points (5+4) and three multi-point outings, which includes two three-point games, to move into second in the league in scoring in the last four games.

Laval scored 1:59 into the third period to take a 3-2 lead before Weissbach, Pekar and Schuldt all scored 4:04 apart to give Rochester a two-goal advantage.

The Amerks seemingly had all the momentum, but after a late interference penalty, along with the Rocket pulling McNiven for two-man advantage, Laval brought the score to 5-4 with 5:18 left in regulation.

Less than a minute later after Ylönen’s second tally of the contest, Dea received a backdoor feed from Belzile and tied the game to force the first overtime period for the two teams this season.

During the extra frame, Rochester outshot the Rocket 3-1 before Laaksonen sealed the 6-5 victory to give the Amerks eight straight wins against Laval and a perfect 4-0-0-0 all-time record in games decided beyond regulation.

The Amerks return home to The Blue Cross Arena for a brief two-game homestand beginning on Wednesday, Nov. 3 in a rematch against the Belleville Senators. The 7:05 p.m. matchup will be the second of eight scheduled meetings between the two teams this season and will be carried live on The Sports Leader 95.7 FM/950 AM ESPN Rochester as well as AHLTV.