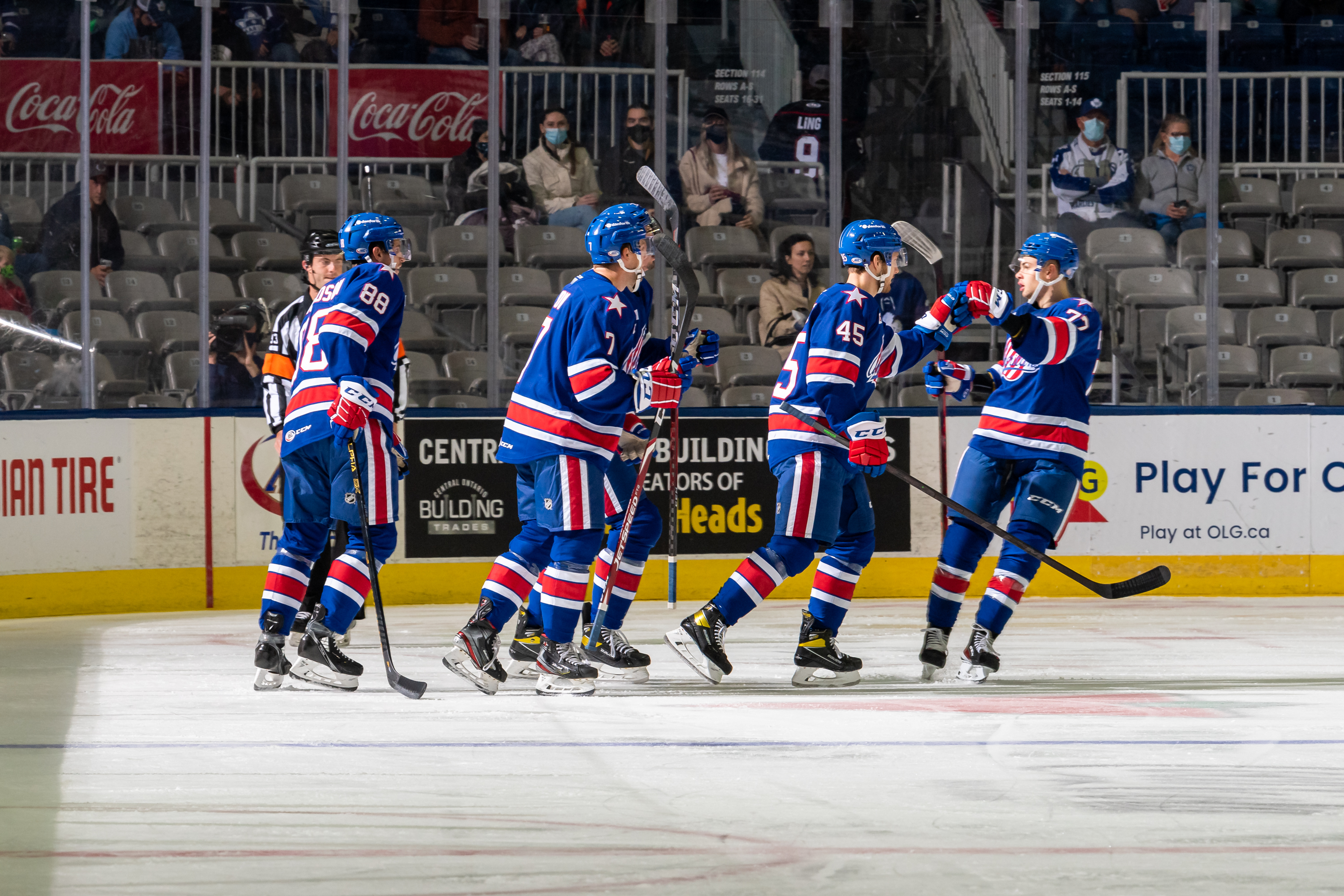 The Rochester Americans (2-1-0-0) erupted for four first-period goals and saw five different Amerks forwards recorded multi-point efforts, including three-point outings from Michael Mersch (1+2) and Mark Jankowski (0+3), as the team began its four-game Canadian road swing with a convincing 7-3 win over the Toronto Marlies Saturday afternoon at Coca-Cola Coliseum. The win was the Amerks second in as many games and the first time Rochester has faced a Canadian team since the 2019-20 season.

The victory, Rochester’s first in Canada since March 24, 2019, improves the club to a 10-3-1-0 record in the last 14 meetings against the Marlies, which includes a near-perfect 5-1-0-0 mark in 2018-19. Over the last 29 games in the head-to-head series with Toronto, the Amerks have scored two or more goals in 23 contests, which includes 10 games where they have produced five or more tallies.

In addition to Mersch and Jankowski’s multi-point outing, Jack Quinn continued his hot start to the year, scoring twice in the opening period, including the eventual game-winner. The rookie forward has opened the season with at least one goal in each of his first three games while already doubling his total from last season. After combining for five points (3+2) in two games, he closes out the weekend leading all AHL rookies in goals (4) and points (6).

Linus Weissbach scored the first two goals of his pro career and JJ Peterka (0+2) added a pair of helpers for the second straight night. He, too, finished with five points (1+4) on the weekend and now sits one point back of Quinn as the Amerks now currently have the league’s top two scoring rookies.

Ryan MacInnis and Brendan Warren completed the scoring on the night with their first goals of the season. Defenseman Jimmy Schuldt earned his first point as an Amerk on Quinn’s first-period marker while Matej Pekar and Brandon Davidson were also credited with an assist during the contest.

Goaltender Aaron Dell made his Amerk debut and earned his first win of the season as he stopped 27 of the 30 shots he faced.

Toronto forward Brett Seney registered a pair of goals for the second time in three games this season while Kirill Semyonov scored his first career AHL marker. Rookie goaltender Erik Källgren (1-2-0) made his third start of the slate for the Marlies but was replaced after allowing four goals in 13 minutes into the first period by Andrew D’Agostini (0-0-0). D’Agostini made his season debut in relief, making 18 saves.

In the first period, the two clubs combined for six goals with three coming in the opening 5:28 before the Amerks took a 4-1 advantage into the break.

Quinn got things going early for Rochester, scoring just 83 seconds into the frame as he banged in his own rebound after Peterka centered a pass atop the goal crease. Following Quinn’s third tally of the campaign, Warren intercepted a clearing attempt by Kallgren before he flicked the puck into the net for his first of the season at the 3:30 mark.

Toronto cut into the 2-0 deficit as Seney added his first of the night with 14:28 left in the period, but MacInnis and Quinn countered back to push the Amerks lead to 4-1.

The Marlies made the score a one-goal game as Seney and Semyonov both tacked on goals in the second half of the first and middle periods, respectively, but Weissbach restored Rochester’s lead as he roofed his first professional tally at the 18:19 of the second stanza.

On the marker, Jankowski carried the puck into the Marlies zone, and as he fell to the ice, Weissbach scooped it up and picked the top right corner of the net for his first professional goal.

Rochester didn’t relent during the final period of regulation despite holding a 5-3 advantage as Mersch and Weissbach rounded out the scoring to kick off the first game a four-game Canadian road swing.

The Amerks continue the road trip on Wednesday Oct. 27 against the Belleville Senators at CAA Arena. The 7:00 p.m. matchup will be the first contest between the two clubs since Rochester completed a two-game sweep on March 6 and March 7, 2020. All the action will be carried live on The Sports Leader 95.7 FM/950 AM ESPN Rochester as well as AHLTV.