It’s been 72 days since the arraignment of Charles Bowman, a Fayette resident for misdemeanor charges in connection to the Cayuga Nation, but he’s yet to receive any evidence for the alleged crimes that were levied against him.

Oral arguments were supposed to start yesterday on Wednesday, Sept. 22, inside the Seneca Falls Town Court, until the proceedings had been suddenly halted that same morning. Bowman’s court date had to be rescheduled because a Seneca County District Attorney’s office employee allegedly contracted COVID-19, according to a court clerk. 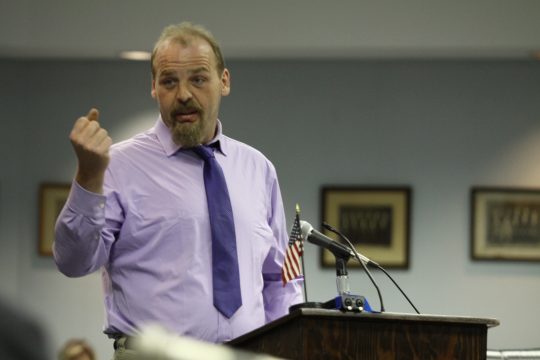 Charles Bowman speaks before the Seneca County Board of Supervisors shortly after the incidents in February 2020. (Photo: Greg Cotterill, Finger Lakes Daily News)

He and John Alder Stevens, his Ithaca-based criminal defense attorney, only found out a few hours in advance of their 12:30 p.m. court date — just in time before Bowman would’ve paid $365 for his lawyer’s short trip to Seneca Falls.

Neither of them will be returning to the courthouse until nearly two months later: Wednesday, Nov. 17.

“The excuses of COVID maybe true for today’s court date but that dose not excuse his complete disregard to follow the law,” Bowman told FingerLakes1.com. “He still has not turned over evidence. It is well past the 45 days he has to do so.”

New York State recently amended its legal statutes regarding the process of discovery motion during the bail reform era, which clearly states defendants have a right to obtain any evidence from a discovery motion within 15 days of their arraignment. Prosecutors may be granted an extension of 30 days to process voluminous records like grand jury transcripts, which already happened in the case of Seneca County District Attorney Mark Sinkiewicz, according to Bowman. Discovery should be finished 45 days after an arraignment, but there is a short list of exceptions, too.

Sinkiewicz: If Bowman “had a Native American name, we wouldn’t even be talking about it,” recorded conversation with Seneca County DA surfaces

Bowman believes he’ll “never get a fair trial” in the county and plans to attend the Seneca County Board of Supervisors upcoming meeting on Tuesday, Oct. 12, pleading to have Dave Ettman, the county attorney, write a letter to the state’s Attorney General, asking for them to assign a prosecutor from outside of the county.