Previously known as home to Arthur Dove, a prominent and influential artist during the American modernist movement, The Dove Block’s first floor is being restored to become an art gallery and community space for downtown Geneva.

Joe Hayes, Hobart ‘18, is the managing director of The Dove Block Project. He works with the board members of The Dove Project to make their visions a reality. Specifically, Hayes has focused on maintaining a schedule for the project to follow so that it can open to the public in the near future.

The Dove Block was purchased by Corbett Inc. last winter. Previous information has been released about what each floor of the Dove Block will be dedicated to, but since the building will be open to the public before next summer, Hayes elaborated on the intent for each floor in a conversation with Fingerlakes1.com. As for progress, Architect Jessica Vaughn (founder and principal of Urchitecture Studio), has recently provided the first round of drawings for the space to The Dove Block Project.


The Dove Block Project’s art gallery is on track to open to the public, but an official date has not been set yet for a number of reasons. There are, however, a wide range of possible dates to pick from according to Hayes along with events hosted before construction is completed.

Despite The Dove Block not having any important dates announced just yet, that does not mean there is nothing happening down on the corner of Castle and Exchange Street. The Dove Block Project is currently planning events to host hopefully by the end of this summer and leading into the fall.

Additionally, The Dove Block Project has coordinated with Corbett Inc. to have a collection of prints and recreations of Arthur Dove’s works along the entirety of a wall on the third floor which is intended as an event space. Vice President of The Dove Block Project, Jim Spates, Professor Rachael DeLue, and intern Ryan Willcox are currently working on recreating this wall through contacting the museums currently in possession of Dove’s works by using a source photo provided by The Smithsonian Museum.

Moreover, the first floor also has the intention of being a welcoming community space for downtown Geneva, and a place for people of all ages to have an opportunity to gain a positive experience from The Dove Block. 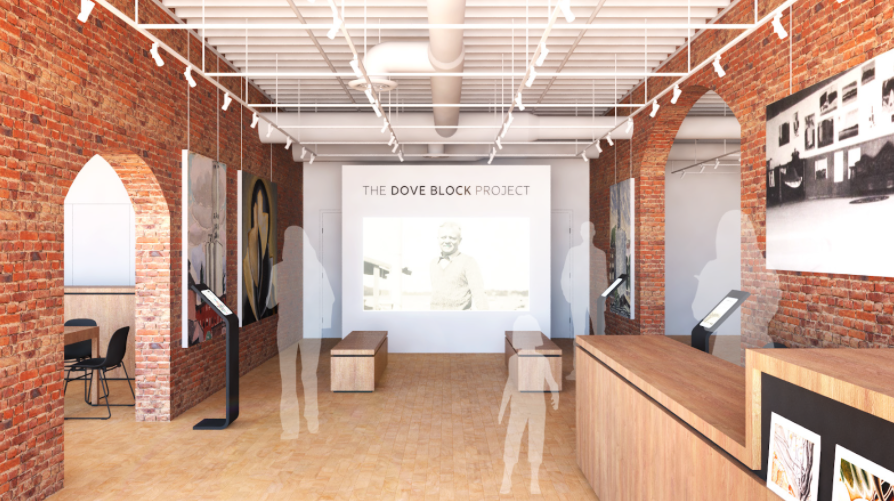 Hayes stated that many events are in the works of being figured out for the Geneva community to participate in. Not only will The Dove Block be a spot to view recreations of Dove’s works on the third floor, but it will also be a space for local artists to have their own art be featured in their gallery downstairs.

The Dove Block Project is planning to work with local and different vendors because the Project is committed to showcasing a large variety of the creativity found within the Finger Lakes region.

“Ideally, we plan for aspects of the Finger Lakes region to be incorporated in this one space,” said Hayes.

Additionally, the space will be versatile for all ages. Both children and adults will be able to experience The Dove Block in different ways. Adults, on one hand, will have access to potential wine tastings and art shows. Children that participate in the Girls and Boys club will ideally have access to art classes hosted inside The Dove Block this coming fall and winter seasons.

Abigail Leyson is a Stamford, Connecticut native and a senior at Hobart and William Smith Colleges. She’s covering events in the Finger Lakes from Geneva. Have an idea for a story? Send it to [email protected].