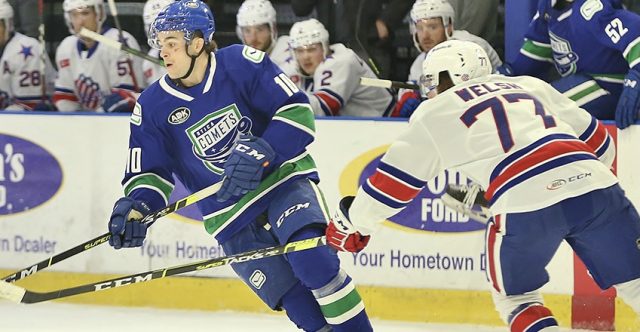 The Rochester Americans (8-12-2-1) struggled to generate any offensive firepower in a 7-1 loss to the intrastate rival Utica Comets (12-7-0-1) Friday at the Adirondack Bank Center.

The Comets have been dominant within the confines of the Adirondack Bank Center this season, going 8-1-0-0 on home ice with half of those home wins coming against Rochester.

Forward Brett Murray (1+0) provided the Amerks lone tally of the night, which marked his eighth point over the last 10 games. Rookie Matej Pekar (0+1) has found his groove over the last five games, adding his fourth assist in that span. Since coming to the Amerks on loan from the Vegas Golden Knights just last week, defenseman Nick DeSimone (0+1) found himself on the scoresheet once again with his third assist in Rochester and eighth of the season overall.

In his fifth start of the season, rookie goaltender Stefanos Lekkas (0-5-1) got the loss while making 33 saves in his sixth appearance.