Jets bringing in players from the practice squad

The sudden strike of the COVID-19 pandemic necessitated new NFL practice-squad rules that affected the organization of the Jets’ initial practice squad of this season. Nevertheless, the changes only affected the number of players and their experiences. The new rules bring more flexibility when compared to what was obtained in the past.

For instance, the new 2020 rules only allow for a maximum of 16 new signings on its practice squads as against the previous maximum of 10. Six out of the total players can accrue many years of experience. Only sign free-agent players are allowed. In other words, players that are signed on another team’s practice squad will require to be signed to the active roster.

The NY Jets added some new faces to the team about whom NFL betting fans should know. As a fan, you may also like to explore experts’ recommendations about the best NFL betting sites and new bookies. The new practice also allows for weekly promotion of up to two players from their practice squad to the active roster, which now consists of 55 players, without exposing them to waivers. Note that the only difference that exists between players on the practice squad and active roster exists in their pay. As fans of Jets, you are expected to be familiar with the new faces of players that were affected by the team’s several roster moves.

Campbell (5-11, 190), who signed to the Jets P-squad on November 3, was elevated from the practice squad on December 8 for Sunday’s game against the Raiders. He played 13 snaps on special teams. During his play in the XFL with the DC Defenders and the Alliance of American Football with the Birmingham Iron, he had 21 tackles and a team-high 2 fumble recoveries. While with the Browns at Northern Iowa College where he spent training camp in 2018, he couldn’t make the 53-man roster.

Dawkins (6-1, 215) was signed to the practice squad on September 22 and was promoted to the active roster on December 5. He originally was signed by the Cincinnati Bengals in 2019 as a free agent, though he was not drafted eventually. He was waived by the team at the end of training camp. However, he was re-signed to the team’s practice squad before the Tampa Bay Buccaneers signed him to their active roster. He made his NFL debut against the Tennessee Titans on October 27, 2019, and was waived on September 5.

Cager (6-5, 220), originally signed as an undrafted free agent after the 2020 NFL Draft on May 6, was signed to the practice squad on September 5, 2020, a day after he was waived. He had college football for Miami (FL), where he had 45 receptions for 681 yards with 10 receiving touchdowns, and Georgia, where he had 33 receptions for 476 yards with four receiving touchdowns. Before his eventual signing to the active roster on December 12, 2020, he had been elevated from the practice squad to the active roster twice. The first elevation occurred on September 26 in the team’s preparation for the game against the Indianapolis Colts on the third week though he recorded two receptions for 35 yards. He was elevated the second time on October 1 for the week 4 game against the Denver Broncos, though he got reverted to the practice squad again the following day. 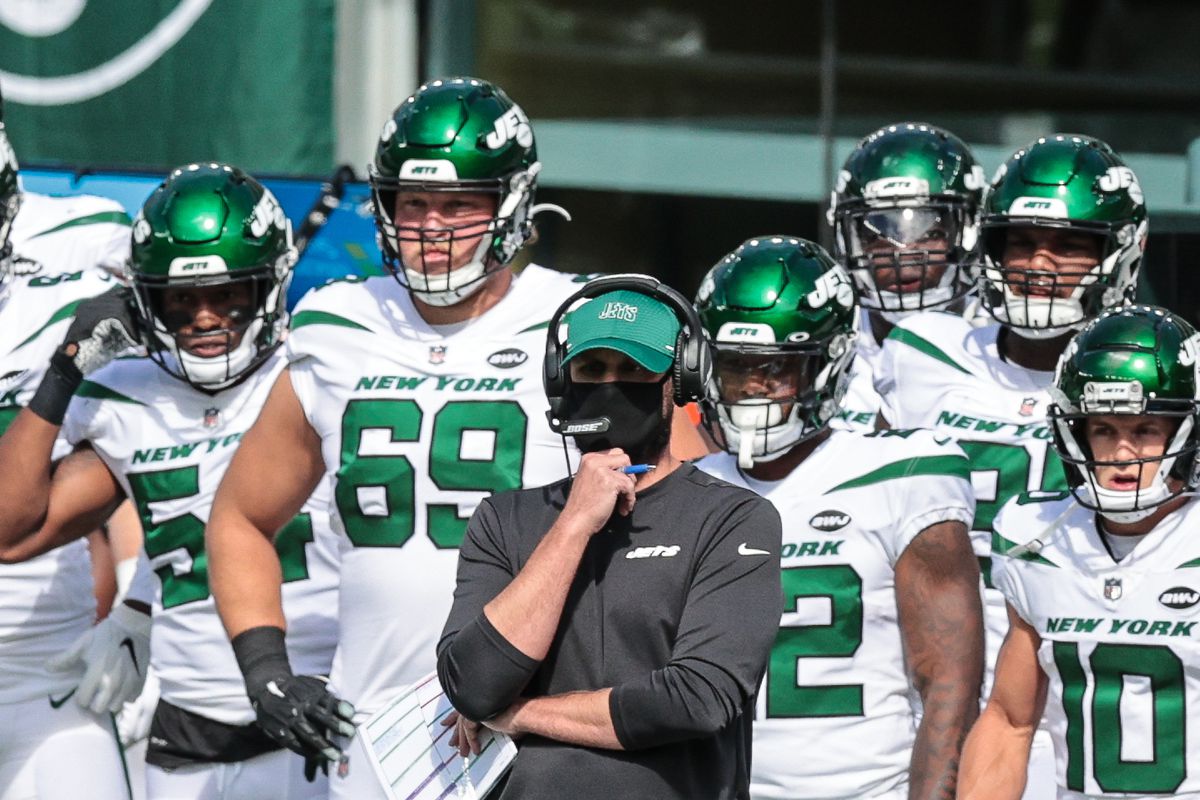 Hampton (6-1, 206) is famous for his ball skills and deep field instincts. His background at cornerback gives him an edge in man coverage. Hampton accepted a combined invitation to participate in the East-West Shrine Game and in the 2019 NFL Draft. Hampton was signed to the New York Jets practice squad on November 3, 2020, and was promoted to the active roster on December 12, 2020. He was initially drafted by the New Orleans Saints in the sixth round in 2019 out of Rutgers where he played five games as a rookie before being placed on injured reserve on December 17, 2019. He totaled 167 tackles, 7 tackles for loss, 4 interceptions, and 20 pass defenses in 33 games for the Scarlet Knights.

Hogan (6-1, 210) signed with the team on August 19, 2020 and had 14 receptions (second on the team) for 118 yards in five games. He sustained a high-ankle injury against the Cardinals on October 11 which necessitated the decision to place him on injured reserve on October 13, where he would spend the next six games. He was activated to the active roster on December 15, 2019. Joining the NFL as a free agent in 2011, Hogan could not make the final roster of each of the teams that signed him, including the San Francisco 49ers, New York Giants, and Miami Dolphins. His first roster spot was landed with the Buffalo Bills in 2012. He has 216 career receptions, 2,975 yards, and 18 TDs in 100 games (39 starts). Hogan is noted for his speed and strength as a wide receiver

Hassell (5-11, 200) was signed to the New York Jets active roster on December 11. He started his collegiate career at South Dakota State where he recorded 41 tackles, four tackles for loss, a sack, and an interception by starting in all 14 of the Jackrabbits games. He played in 12 games as a sophomore, recording 21 tackles. Before being signed to the New England Patriots practice squad on November 30, 2020, he was signed as a free agent with the Cleveland Browns on May 3, 2019, where he was waived during roster cuts. He, however, made the active roster list on November 20, the same year. During his NFL debut against the Miami Dolphins, he played nine snaps on special teams and made two tackles to become the first Florida Tech player to appear in an NFL regular-season game. He was picked up by the New York Jets three days after his release by the New England Patriots practice squad.