On Friday, New York State Police announced that the investigation into a double-fatal crash that was caused by a pickup truck slamming into the back of a minivan had concluded. They said no criminal charges would be filed against the driver.

The crash happened near the Junius Ponds Rest Area and devastated a Baldswinsville family.

Traffic was slowing down for a lane closure in the area when a pickup truck failed to slow down — crashing into the rear of a minivan. The initial collision proved to be the most-deadly, but the van was pushed into a small passenger vehicle, which slid into a tractor-trailer.

Two children, Maryella, 11, and Elizabeth, 9, of Baldswinsville died. Their parents, Maureen and Thomas Annal, were airlifted to Strong Memorial Hospital with ‘very serious injuries’, according to troopers.

A fundraiser for the family raised more than $188,000 to help with memorial efforts of the girls killed in the wreck, as well as medical expenses.

“Maureen is continuing her rehab at the Shepherd Center in Atlanta and still has a long road ahead of her. She gets 4-5 hours of therapy a day and has her good days and bad days. They are projecting she will be there till January. This is a great facility filled with incredible staff and they know she is in the right place,” Jennifer Annal Bacon wrote in the most-recent update to the GoFundMe. “Maureen’s neck was broken in two places and she suffered a severe spinal cord injury during the accident. After undergoing two surgeries, she continues to work hard in rehab.”

The driver of the pickup truck was identified as 73-year-old Abraham Hara. The Geneva resident was not injured in the crash, according to troopers who led the investigation. The final publicized update from State Police came on September 3rd, where authorities said, “The investigation is continuing and charges are pending.”

However, after more than two months of investigation, state police announced on Friday that no charges would be filed. They called the investigation ‘closed’ and said that the driver had been issued a ticket for a vehicle and traffic law infraction. 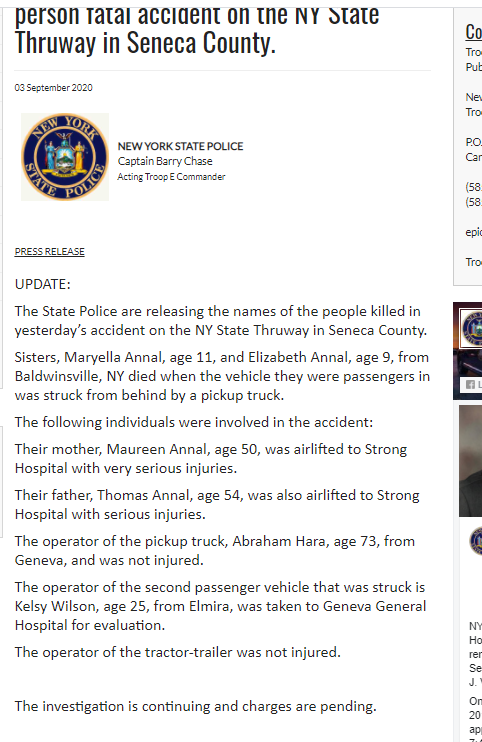 A screenshot shows the last update NYSP had released before Friday’s announcement that no charges would be filed. That update indicated that charges were pending.