It was Labor Day. Typically a time of leisure, marking the end of the summer.

However, this year it was filled with effort and hard work in Washington D.C. on the outskirts of Black Lives Matter Plaza.

A black chained fence hugs along the south side of the White House.

A mounted cyclist officer informed that the fence was a new addition, just two months ago, but it’s still drawing crowds.

In the shadow of the White House, a shrine has been erected in President Donald Trump’s backyard, piece by piece.

Blacks are grieving in America and right here just outside of Black Lives Matter Plaza.

The shrine points to that clearly. It’s a somber sensation stretching across the sidewalk. 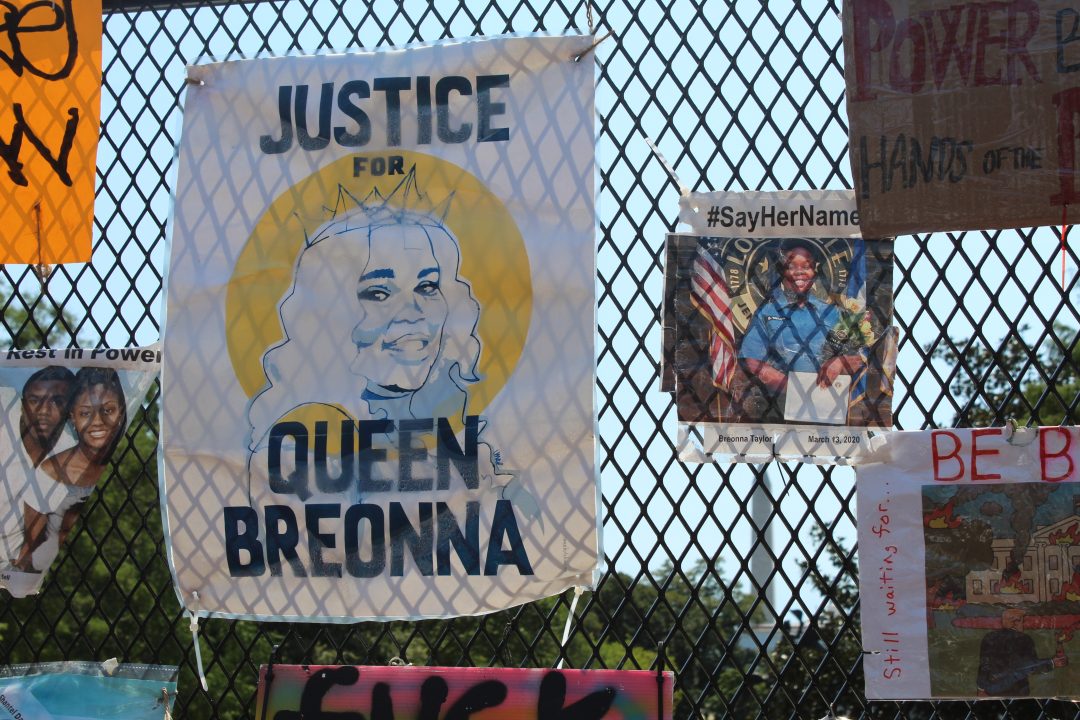 Icons of famed Blacks like Colin Kaepernick and Angela Davis hang from the chains, and even several victims of police brutality from their community: George Floyd, Breonna Taylor, and now Daniel Prude of Rochester joins them on the wall.

Walking along the fence, faces of the deceased keep popping-up and have already been put to rest, “Rest in Power” read above many their headshots.

Young children and their mothers are peering through the holes in the fence just to get a glimpse at the White House. 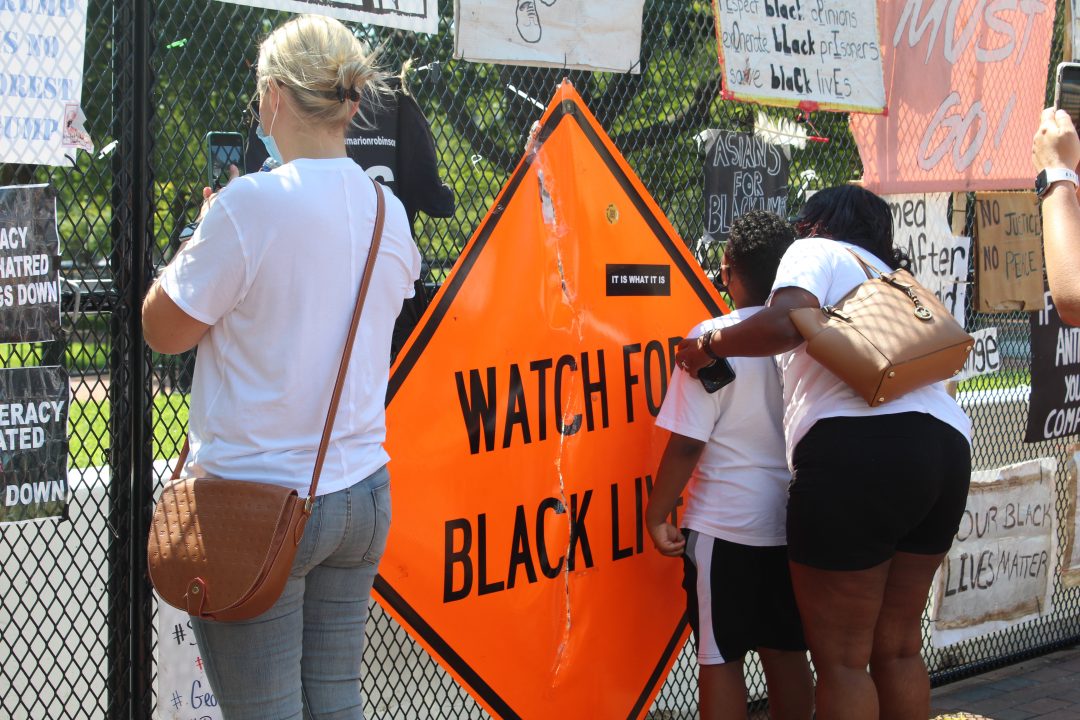 A Black child as young as five stopped and asked, “What is racism? What does this mean?”

At the same time, tourists are photographing the collage that stretches along the sidewalk, some are even posing in front of the makeshift memorials. 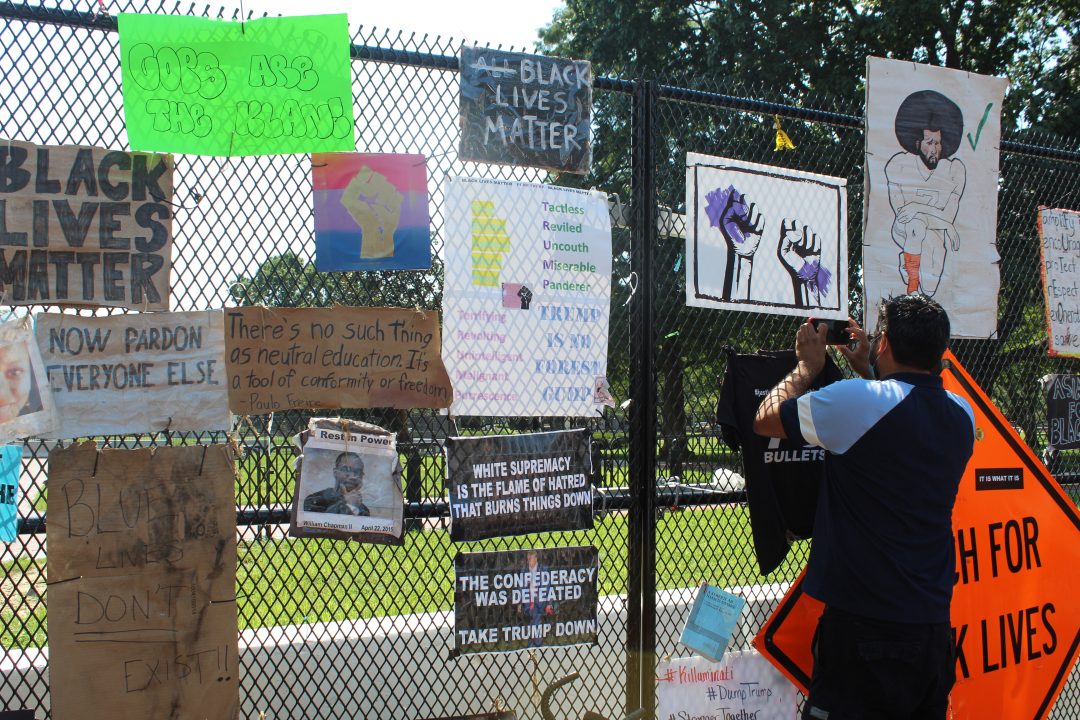 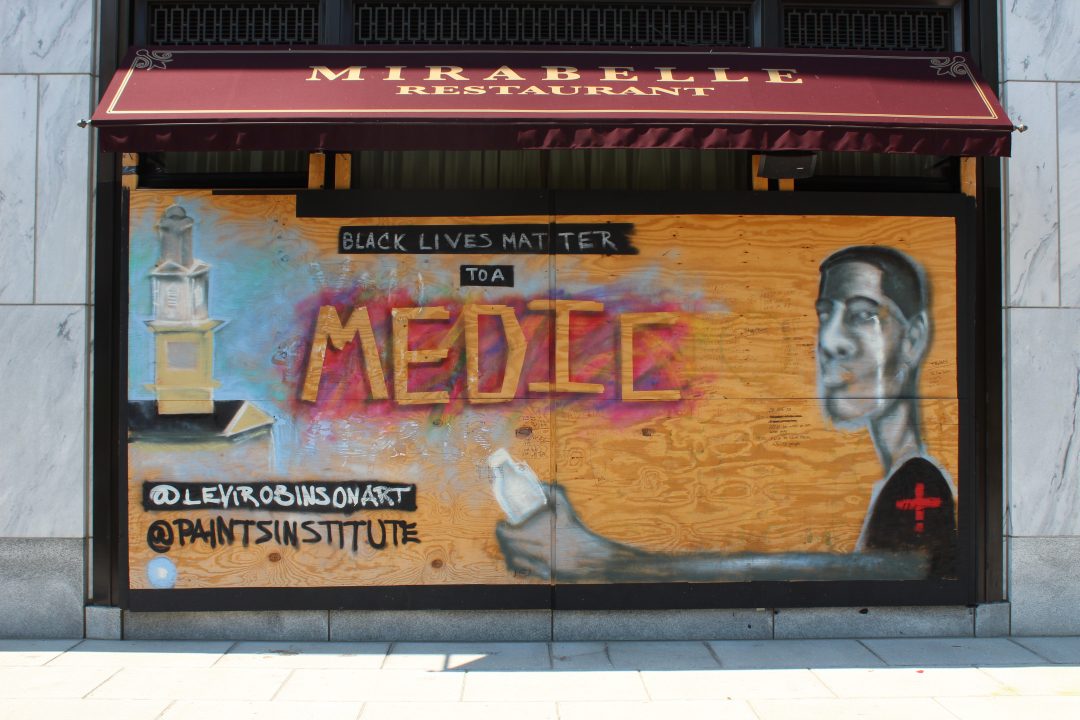 The yellow-painted letters on the asphalt extend across the entire streetway just short of the rear entrance into Lafayette Square, which faces directly in front of the White House.

Within the boundaries of Black Lives Matter Plaza, the people are in a stasis of peace.

It is commonplace to find protests and rallies occurring within the confines of the plaza. The people here are proactive. They speak their mind and, in this case, sing it too.

On this Labor Day, the Freedom Day Foundation harmonized their voices in song to bring forth joy and jubilee to oust any sadness and despair.

Convening at 3 p.m. in the streets of Black Lives Matter Plaza, several choirs surrounding the District of Columbia came together on this federal holiday in the hopes to lift their voices during America’s reckoning with race.

Morgan Barnhart, the founder and lead organizer of Freedom Day Foundation shared that she and her peers “basically all came together in the streets five days after the death of George Floyd.”

For them, this was the first-time that they organized an event of this style and “really wanted to incorporate song with this movement.”

After singing a few songs with SongRise, Justice Choir D.C. and ADAMS Beat, the organizers decided to march through the streets of the nation’s capital to Freedom Plaza. 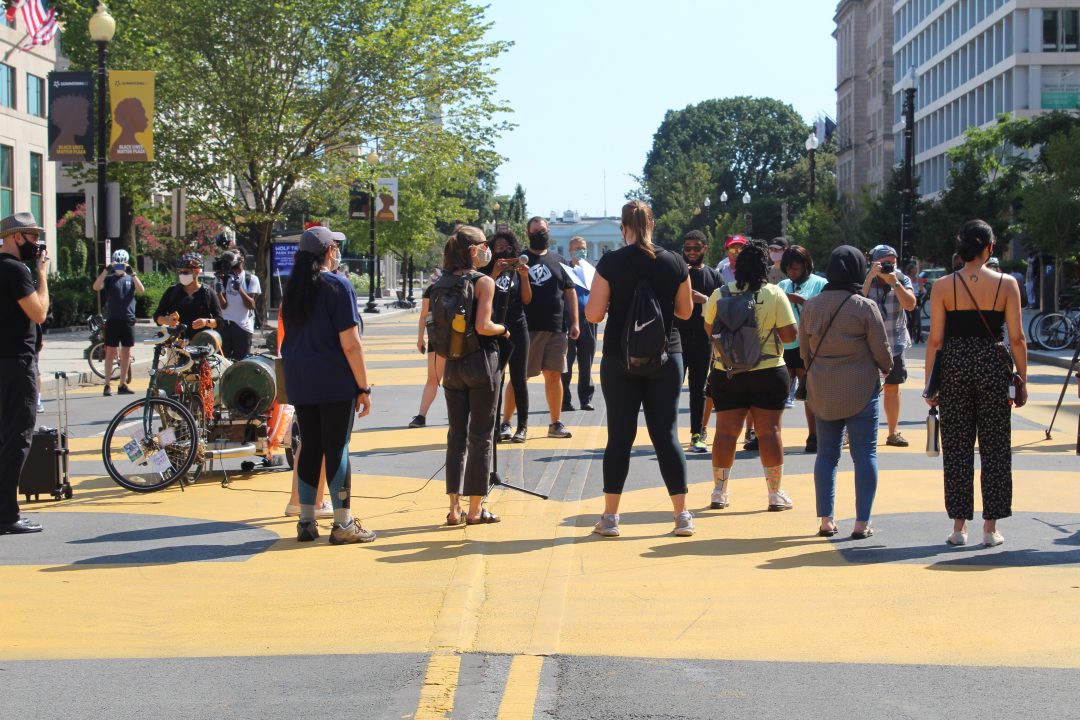 The acapella groups repeatedly chanted, “One foot in front of another and lead with love…” as they started stepping.

No less than one block away, protesters passed St. John’s Episcopal Church located on Sixteenth Street and H Street NW. 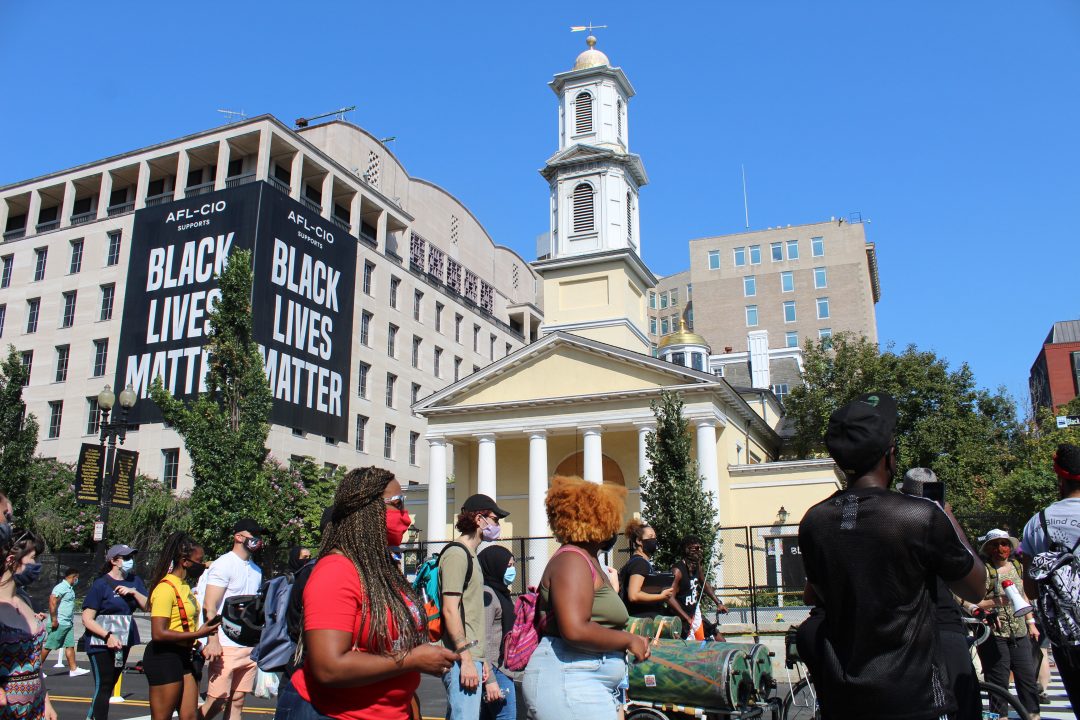 Now its most recently remembered as the site where President Donald Trump took his infamous photo-op while placing his hand on a Bible during the George Floyd protests, just one block away from the White House.

Often referred to as the “Church of the Presidents,” it symbolically became the peoples’ shortly after Trump’s unscheduled visit with signs and banners supporting Black Lives Matter popping-up from behind the fencing as well.

Let Freedom Sing in the Plaza

After quite a few verses from several iconic songs, the marchers eventually arrived at Freedom Plaza that closely neighbors the U.S. Capitol.

But even when the protesters made it to their promised land, the celebration did not stop there just yet. 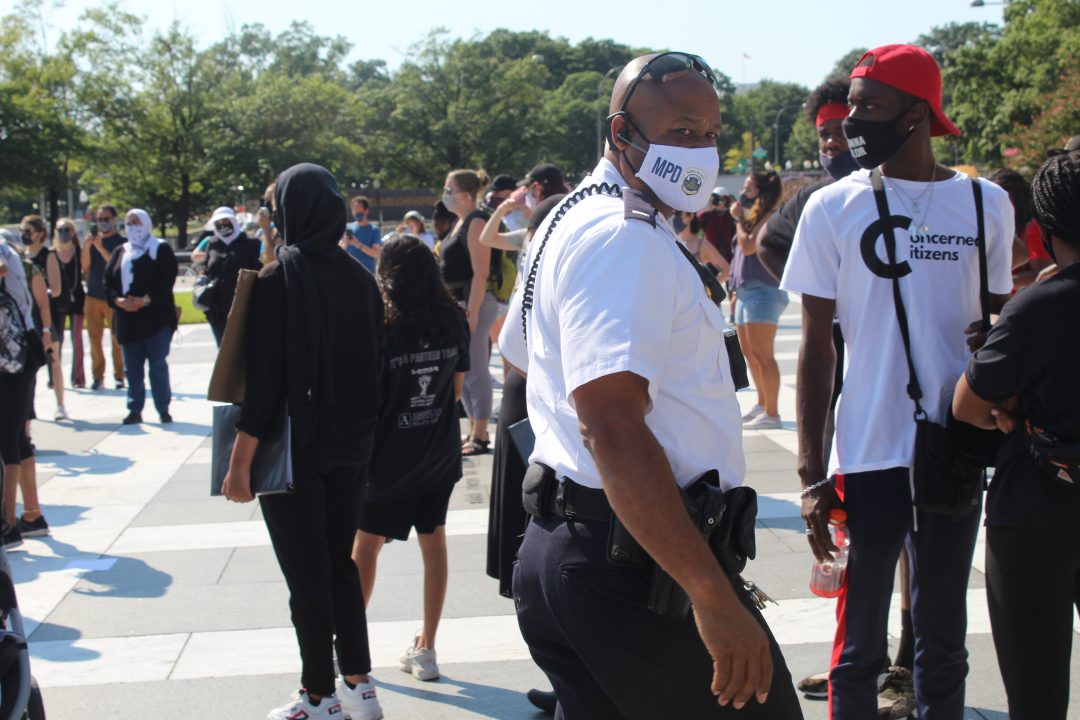 “Our joy cannot be forgotten because in our joy we find the light and that’s what keeps this fight moving,” Barnhart told FingerLakes1.com after the event.

In their eyes, music is considered a universal artform and “turning to it in times of despair” has been a constant throughout all of history for Black culture: slave songs, the invention of improvisational jazz and rise of rap.

If music is medicine, then it’s considered a form of healing to Barnhart.

“We really felt that we were in need of some healing and music could be our medicine, and that’s what today was all about: Let Freedom Sing,” she added.

Some were all-time classics like Lean on Me, but other songs were composed pieces that even debuted on that Labor Day.

Nikki Nesbary was one of those original songwriters. She too, unveiled her newly composed song titled “Frontline Outcry” for the very first-time.

Nesbary, who serves as the chair of SongRise, the all-female acapella group and co-director of Justice Choir D.C. felt confident in expressing her support toward essential frontline workers, especially those in the medical field.

She admittedly even got her inspiration for crafting the song after hearing a story from National Public Radio about a patient care technician and mother of seven, who grappled with working on the frontlines while COVID-19 strangled her home of New York.

“I basically took some of the words that she spoke in that story that I used to write the song. I was just trying to evoke the danger in people going on to risk their lives on the line and trying to take her words, after like the emotion that she was feeling when having to leave. She might not come back because we didn’t have the proper personal protection equipment,” Nesbary exclusively told FingerLakes1.com.

Even though she now lives in the nation’s capital, Nesbary still has a strong connection to the Empire State and wishes all New Yorkers goodwill.

“I have friends and family in New York, and I would just say that I love you all and I hope everyone stays safe. New York has been an amazing example to the country, and I hope that we continue to follow your lead,” Nesbary later shared.

Aside from Nesbary and her participating organizations, a handful of child singers from ADAMS Beat took center stage and matched the same level of intensity musically in comparison to their predecessors.

ADAMS Beat, a Muslim youth choir founded in 2016 has claimed to be the first one in the entire nation.

Hurunnessa Fariad, the director of ADAMS Beat introduced the three singers that were in attendance, saying that more would have joined them, but school was starting on that Tuesday following the holiday.

The trio sang a cover of Bruno Mars’ “Count on Me” in the blistering summer heat to much fanfare.

Speaking Up Against Injustices Ahead of 2020 Presidential Vote

Even in the District of Columbia, the power of grassroots movements is unmatched.

Barnhart and her allies noted how that they were aware of the recent headlines about Daniel Prude from Rochester, who serves as the latest reminder about the life-threatening dangers that Blacks face each and every day in America.

“While these are headlines, this is our life. This is something that America is now being aware of and woken up to. The pain and reality of being Black in America hasn’t gone anywhere. You guys are just being welcomed to our story,” Barnhart admitted.

Beyond singing and shouting in the streets, another way to show sympathy and how someone actually cares about redressing racial injustices in America can be achieved through voting at the ballot box.

Freedom Day Foundation’s special guest speaker had a chance to speak about the significance of civic engagement at the Labor Day event, but only after the musical performances concluded.

Ty Hobson-Powell, the founder and director of policy for Concerned Citizens of D.C. talked about why voting in the 2020 presidential federal election actually matters to him.

Concerned Citizens of D.C. is a local grassroots organization that aims at improving the quality of life for Blacks in the nation’s capital by curbing police behavior.

In his short remarks, Hobson-Powell presents the case about why every vote still counts in electoral politics.

“It’s important that we understand that one of the ways to advance our interests to places and spaces where decision making is being done is through electoral politics. There’s no putting people in office to hold your value. Its voting the people out who don’t hold our values,” Hobson-Powell voiced into his megaphone.

Hobson-Powell just recently spoke at the March on Washington 2020 demonstration took place in late August to honor the 57th anniversary of the Rev. Martin Luther King Jr.’s iconic “I Have a Dream” speech that occurred on the footsteps of the National Mall just facing the Lincoln Memorial Reflecting Pool.

Fifty-seven years ago, King and the Civil Rights Movement marched in Washington, D.C. for social justice and equality, especially the right to vote.

But now in 2020, the work of those activists has not fully materialized in the eyes of Hobson-Powell even after the passing the historic Voting Rights Act of 1965.

He considered, “One of the most surefire ways is to vote and we know that it’s powerful because of the way that is intended to be suppressed historically and presently… We are reminded that now, even in our modern times, there is an active effort to suppress the minority vote. There is an active effort to leave those voices out of the conversation, and so, one has to wonder, why it be so much effort to hold it back if it was worth nothing?”

Harking upon the recent remarks of former Black Panther Angela Davis, he believes that her comments shed some insight about how Americans should actually weigh this election, if they in-fact care about striving toward progress and justice for all.

“I don’t think that anyone of these is my idea candidate, but I understand that in order for me to have my revolution, I have to have sensible leadership that will be amenable to making some level of change, some level of compromise would be in a way that comports with justice,” Hobson-Powell elaborated.

His mind has been already a decision about who he’s voting for this upcoming election in the race for the White House between Trump and former Vice President Joe Biden, saying that “we know who that is, and we know who that isn’t.”

Immediately after Hobson-Powell finished his speech in Freedom Plaza, a mobile ad truck parked in front of the sidesteps of the park. 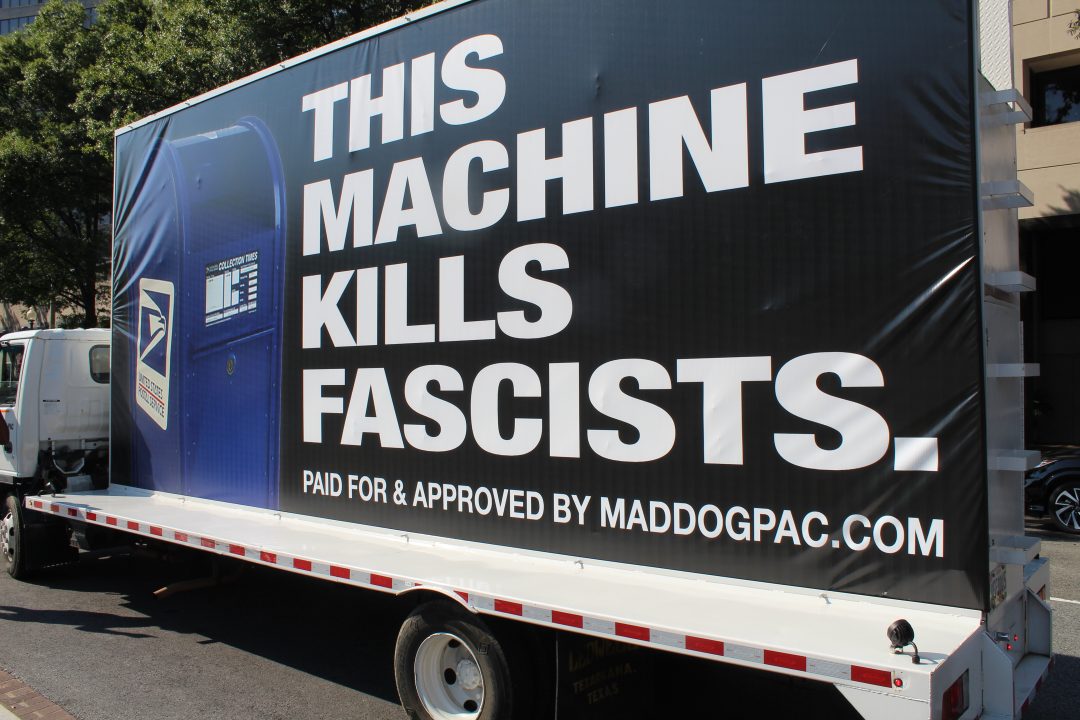 The moving advertisement had been paid for by the Mad Dog PAC, who “engages in high-impact, high-visibility, non-violent activities to fight fascism and defeat Donald Trump and his merry band of GOP Traitors,” as their website reads.

The Mad Dog PAC had been founded in 2017 shortly after President Trump’s inauguration in December by Claude Taylor, a former travel photographer and White House staffer for former President Bill Clinton.

Since then, Taylor has initiated a “hard-hitting, billboard launching, political advocacy organization” with his tagline mission to “Fight Fascism. Stop Trump.”