Daughter talks about losing her father to COVID-19 at Elm Manor, hours after being told he was ‘asymptomatic’

It was noon on Memorial Day when Patricia Miller just found-out that her father Ralph Miller Sr. contracted COVID-19 while residing at Elm Manor Rehabilitation and Nursing Center in Canandaigua.

“I had someone call me who said she worked at Elm Manor. She was working from home though, but she was in charge of letting the family know when somebody had COVID-19, and she had told me that my dad had it, but he didn’t have any symptoms,” Miller told FingerLakes1.com.

Miller shared that Ralph had been tested that Friday before the holiday weekend and received the results in the early afternoon.

Although he seemed asymptomatic at that time, she still felt concerned about his health and well-being to such an extent that she called her father’s phone line at 5 p.m. when she finished-up her workday.

But when the line rang and Miller eventually got through, she had been left in pure shock.

“So, I said, ‘This is Patti Miller. I’m Ralph Miller’s daughter,’ and she’s like, ‘Oh, where do you want us to send the body’ and I was like, what,” Miller asked.

When she asked again “what do you mean the body,” the nurse who had been assigned to Ralph on that day responded, “You didn’t know he passed away?”

In an abrupt and unplanned fashion, Miller heard in real-time that her father Ralph Miller Sr. passed away at 1:40 p.m. on Monday, May 25th – a little more than an hour and half after she learned about his diagnosis earlier that same day.

But without a pause in breath, the nurse immediately pressed upon her, asking her again where she’d like to send her father’s body.

Still in shock, Miller had to call back Elm Manor, but only after she regained her composure.

Eventually, his body had been picked-up by Perkins Funeral Home in Gorham, but there seemed to be more issues too.

Someone at the funeral home who retrieved Ralph’s body insisted “that when they went to pick up my dad’s body, he was in a single body bag when they’re supposed to be double bagging the bodies.”

“He said typically, a body is supposed to be double bags and they only had them in a single bag, and they refused to use a single bag. So, so the funeral home had to use one of their own bags for it as well,” Miller claimed. 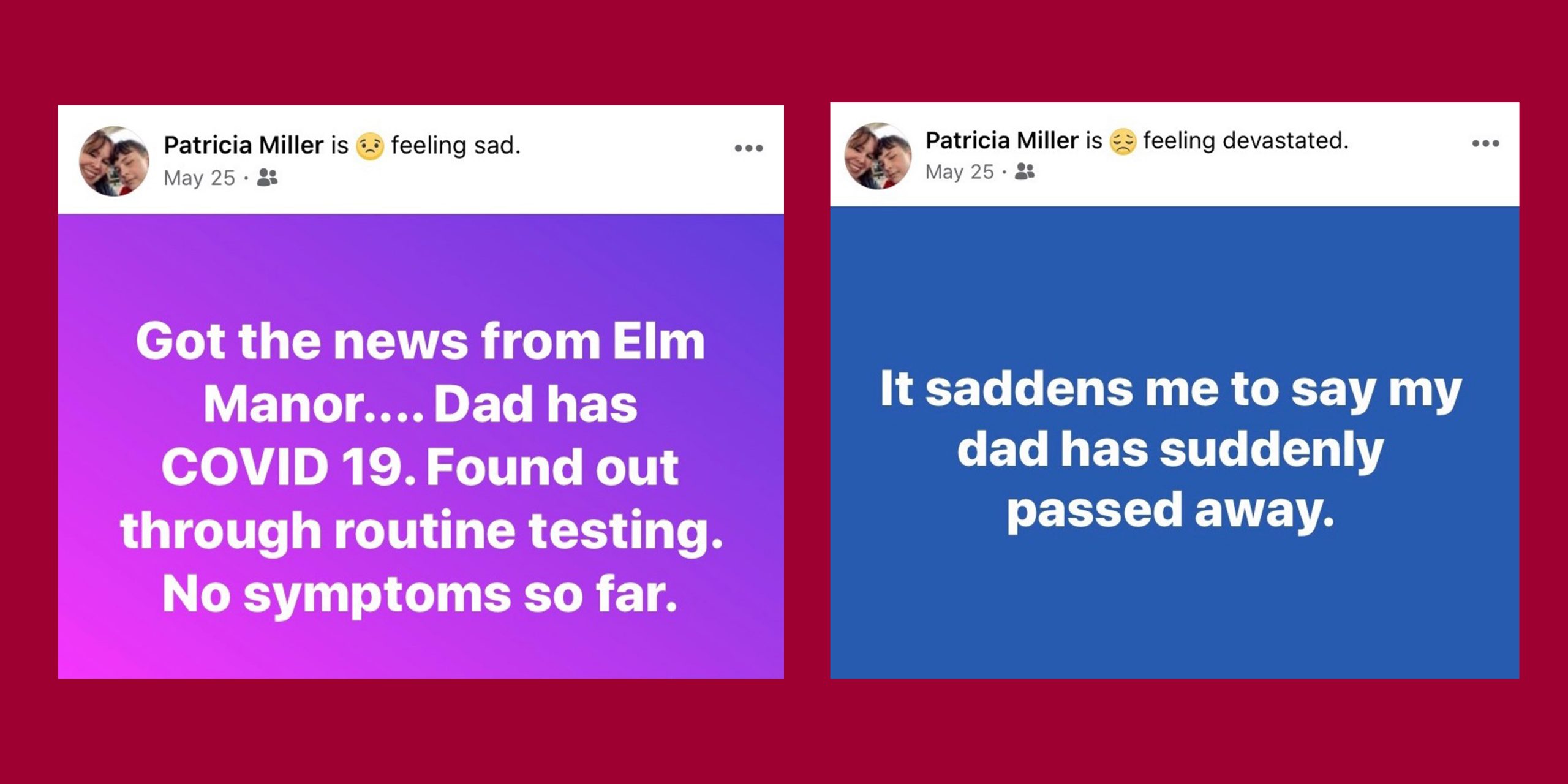 Miller felt concerned whether Oropeza would speak with her on the holiday after-hours, but she actually did.

“I asked her if my dad actually died from COVID. I told her about what happened, and she basically said that a lot of our nurses are our temp nurses because all our nurses are sick,” Miller shared.

Placing the blame on the temporary nurses Miller believes that “she didn’t really apologize.”

“She just kind of blamed it on the fact that it was a temp nurse who said it,” she added.

Miller also claims that the Oropeza didn’t extend her condolences over the phone regarding Ralph’s death, but admitted that she did receive a card in the mail at a later date.

Ralph, who got injured in a car accident back in 2017 underwent a hernia surgery. Following his surgery, he entered Living Center at Geneva North and transferred to Elm Manor in July of 2019.

Although Ralph’s death certificate states that the cause of death occurred from acute respiratory failure, a consequence from COVID-19, Miller alleges that his death cannot be confirmed for certain.

RELATED READ: Husband speaks about wife’s death at Elm Manor: “If I didn’t call every day, I wouldn’t have known”

“Well, we’ll never really know for sure,” Oropeza told her, according to Miller.

Miller also asked if he could’ve contracted COVID-19 before the testing that transpired on Friday, May 22nd – and Oropeza answered her saying, “Well, you know, he could have because, you know, like, sometimes these, these tests aren’t very accurate. It could have been done wrong or some people don’t like things up their nose. Maybe they didn’t go get a good sample of it.”

“You’ll never really know if you if it was COVID or just natural causes. That’s basically what she told me,” Miller recalled.

The prospects of an autopsy had not been presented to her at all.

Now looking back, Miller partly regrets not pursuing an autopsy, especially when the entire process felt rushed – most notably when the nurse sought to move the body immediately.

Despite only learning about her father’s death a few hours before calling Oropeza, she earnestly sympathized with the administrator’s plight, saying “this must be hard on you guys too, because you got so many deaths to deal with” – but then she saw Perryman’s story as a part of FingerLakes1.com’s ongoing investigation into Elm Manor.

“I was trying to do the good thing you know, the understanding but so it’s just like seeing that article and then have my own doubts all this time it’s made me like start questioning everything,” Miller admitted.

Like Perryman, Ralph had also been taken to Finger Lakes Crematory in Livonia but placed in a double urn alongside his predeceased spouse.

“He had already bought a doubler. My mom was in half of it, and he was going to be putting the other half so, that’s what we decided to do,” she explained.

Funeral services are put on-hold, but her family is planning to host a memorial service when the pandemic subsides.

As Miller is still grieving the recent loss of her loved one, the entire process surrounding her father’s death seemed “insensitive” to her.

“But to me it was very insensitive when you hear somebody calling you about something you just automatically assume, they know that the person is dead and there was really no empathy at all from anybody,” she ended.